The Seaford School District will honor former Athletic Director and coach Ben Sirman by naming the Nest the Ben Sirman Gymnasium. Upon the walls of the gymnasium hang banners of conference and state championships won by Seaford and Sirman was involved in 99 of those championships. The teams of today, of all sports, are in some way linked to the efforts and hard work of Sirman who served as the athletic director between 1973 and 1991.

Upon learning of the district’s intentions Sirman said, “I was kind of surprised and I question if I deserve it. I am honored and it is somewhat overwhelming. I’d like to see the court named after Dave Baker. Dave put in a lot of time and developed a lot of good teams.” 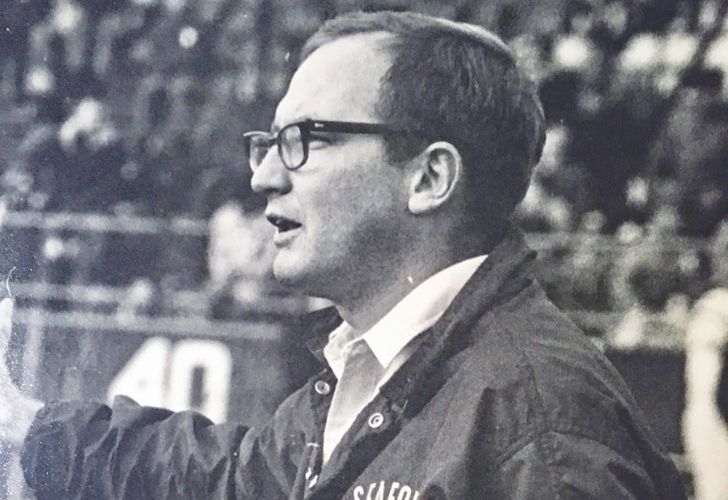 Shown is a photo of Coach Ben Sirman on Thanksgiving Day in 1970 when Seaford defeated Laurel by a score of 48-6. The annual football game was attended by 3,000 people. Just a few hours earlier Sirman’s son, Trey, was born. The Seaford School District is naming the high school gym after Sirman. Photo provided by Ben Sirman

The playing and professional resume of Sirman expands 63 years, beginning in the Laurel School District when he was the Bulldogs’ quarterback.

“It is very nice that the ceremony will be at the game between Laurel and Seaford. I’ve received a great response of congratulations from Laurel people and the players I coached here in Seaford,” Sirman said.

Upon graduation, and sensing he was not big or fast enough for Division I, he chose to attend Swarthmore College on a McCabe Scholarship where he played football, baseball and basketball and graduated in 1962 with a degree in history. “I could shoot a basketball and throw a football but I was slow compared to the big athletes. I went to Swarthmore on a great scholarship and academically it was difficult, but I persevered. I had nothing else and refused to give up and the scholarship was the best and paid everything,” said Sirman.

In 1962, Sirman went to work as a teacher at the then Bridgeville High School. Sirman’s coaching career began there. “I ran a summer basketball league in my back yard,” he said.

Segregation still existed and Sirman said the African American students were attending the Jason School in Georgetown. “I was running this league in 1965 and a group of African American players asked to join. The teams were grouped by grade and I was just thinking of building a good basketball team that would play together,” said Sirman.

Sirman said the summer ended and school opened, “I looked down the hall and the kids from my backyard chose to come to Bridgeville and not go to Jason.”

Students and players such as Albert Horne went to Bridgeville. “Albert was most the most exciting basketball player in high school that anyone in Sussex County has ever seen, everyone loved him,” Sirman said.

Sirman said the two remained friends throughout Horne’s life, which ended too early when he was in his 40’s. Other notable players included Francis Johnson, Gary Maddox, Emmitt Burbage, and Hollis Smack, who Sirman described as an amazing leader with spirit. During his tenure in Bridgeville from 1962-1969, the football team was undefeated for two years and six players played in the all-star game where he coached beside Bob Hoffman and won the game, 42-0.

“Seaford was not disciplined when we joined the program and we knew we had to do something to change it. We coaches developed a behavior manual for conduct detrimental to team morale and brought discipline to the program. The player had to sign it which removed all arguments and all understood it,” said Sirman. “Discipline and structure are ageless and develop winning teams.  Discipline must be the first thing.”

Sirman said as an assistant athletic director, “I was in charge of winter sports and attended all home events from the beginning in 1969.”

Sirman also coached junior varsity, Little League baseball, Little League football, was an assistant varsity football coach, and assistant varsity baseball coach. Coach Sirman was involved in every age level from 9-18 in baseball, football, and basketball during his years at Seaford. Sirman said he has many fond memories but one of the most memorable are the years that Delino DeShields and Lovett Purnell played.

“I did not get to see much of the game because the doors opened and within 30 minutes there was a full house and doors were locked.  We had people sneaking in or students hiding in the school; those were exciting times,” Sirman said. “When my son Trey played they were a good team with Mike Neill.”

The 1988 teams won the conference championship for Seaford in football and basketball.

“I coached with Dave Baker for his freshman team and I coached for Ron (Dickerson) at all levels including JV for three years,” said Sirman. “I also had some great times with coach Billy Lloyd at the Junior High.”

“I was kind of shocked when I went to the Athletic Director (AD) meetings and schools were playing junior highs sports but not Seaford. My goal was to play in any sport that we could get a schedule in,” Sirman said.

Sirman developed the program, identifying the needs, and although it took a couple of years, the programs were started in the school, “Norman Poole was big in helping the program and I called him the athletic coordinator. The very first junior high football team of the new program was the one that won the state championships in 1981,” said Sirman.

Sirman said it was a community effort, including with the Little League, “Al Bowden, who did a tremendous job with all sports in the community and was the main mover in the organization of Seaford Little League. We worked with baseball and basketball too because we wanted a JV and freshman program. We were going to play in every competitive sport that anyone else was playing.”

Sirman said he attributes the weight training class developed by Dickerson as an essential part of the success of Seaford athletics. “The students would have class five days a week but it all changed when they went to block scheduling,” he said.

Sirman said the decline of athletics in the 90s was partly because the weight program was discontinued. “In 1992 we went to block scheduling which meant it couldn’t work in the weight training. The kids then would have to come in at 5-6 a.m. and it started to fall apart and we lost players. That was internal and was how we imploded,” said Sirman. “The other reason that Seaford (and other districts) fell on hard times beginning in the 90s was the athletics at Sussex Tech and then school choice.”

After his retirement in 1991, Sirman continued to volunteer for another 10 years and attended every basketball event. “I did not miss a boys’ game and possibly a girls’ game for 31 years,” he said.

Sirman said his wife Ellen was an enormous part of his success, “Ellen was 100 percent and we raised money in Bridgeville then in Seaford she took over the concessions. It is so important to have the support of the family because it is a family thing.”

Through the years Sirman has developed a plethora of friendships. One of his closest friends, Cap Ron Dickerson, passed away, but Dickerson’s son Marc, a Seaford High graduate, football player, and former varsity head coach, spoke about Sirman.

“He was very close to our family. I have known him since the day I was born,” Marc said, calling Sirman father-like. “When I was working at SHS we were walking in the hall and there was a substitute teacher and he asked if that was my dad and I answered “yes” because that is how me and my brother Craig (Dickerson) feel about coach Sirman. The naming of the gymnasium is important because he put all the pieces in place for successful athletic programs during his tenure as AD. Most of those championship dates are the results of him putting the right people in place and coaching staffs to enable athletes to be successful and capture those championships. He was a great leader, working with coaches and student athletes.”

Mrs. Virginia Hastings, a Seaford graduate and current Associate Principal at Seaford High said, “He always made sure everyone else was honored and has never been honored himself by our district. He is such an amazing man. He has always been one of my go to people.”

Tonight’s (Thursday) ceremony will take place between the JV and varsity boys’ basketball game against Laurel. Seaford’s Director of Human Resources Jason Cameron said, “The Board of Education was so pleased to be able to bestow this honor on Mr. Sirman.  There have been many folks who have done a lot for the district and for Seaford athletics. Almost all of those folks did it under or in conjunction with Ben’s leadership as the athletic director.”

The Seaford Ben Sirman gymnasium will forever be engraved because of the dedication by the man who pioneered programs and organized coaching staffs that brought not only championships to the city of Seaford, but also pride.