Rallies held in Seaford for, against abortion

It is only by happenstance that the projected opening of Planned Parenthood in Seaford at the end of September (delayed by shortages) coincided with a national women’s march on Oct. 2 designed to send a message to the U.S. Supreme Court. Marches were slated in every state across the nation, 623 in total, with a Rally for Abortion Justice in Washington, D.C. Seaford was one of two sites in Delaware where marches were held.

In a telephone interview earlier in the week, Paulette Rappa, chair of Women’s March Sussex, explained the Supreme Court reconvenes on Oct. 4. The court recently rejected a request to block a Texas law prohibiting abortions once cardiac activity is detected — at about six weeks gestation. Not only that, Rappa noted, but as of Sept. 1 when the law took effect, citizens have the right to sue anyone who helps facilitate an illegal abortion, including someone who drives a woman to a clinic for the procedure. 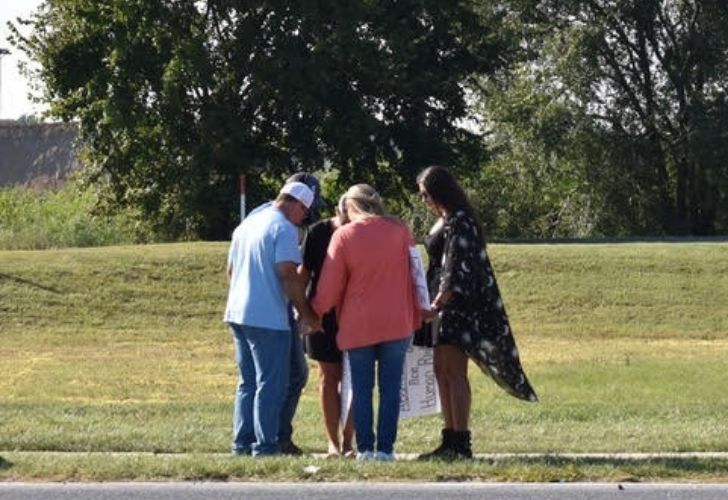 Shown are people from both sides of the issue at the event on Saturday.

“They’re turning neighbor against neighbor. Abortion is constitutionally protected as a right,” she said.

More than 90 organizations nationwide mobilized to defend women’s reproductive rights on Oct. 2. Rappa said, “We want to send a message to the Supreme Court that we’re not happy. You didn’t do your job.”

Marchers fear that the court’s next step will be to overturn Roe v. Wade.

As for Planned Parenthood, Rappa saluted the organization for providing affordable health care for both women and men, even those who don’t have insurance.

“We haven’t had a Planned Parenthood facility in Sussex County for more than 10 years, since the one in Rehoboth closed. It was not serving the population that needed its services because of transportation difficulties.”

Rappa said her group would respect the rights of pro-life protestors, who also planned to be near the Planned Parenthood site on Saturday, as they have been for several days. “We will respect the dignity of those individuals who don’t agree with us. This is about expressing one’s values, and not trying to coerce and persuade through coercion. Our democracy is based on the idea that we have the right to express our opinions without fear or retaliation or violence.”

Asked her personal stance on abortion, Rappa said, “It is a decision and a right for a women to decide how she wants her body to be treated. Who am I to interfere with that? That’s a decision between her, her (medical) provider and her Supreme Being. Not me. Who am I to take that right away?”

Rebecca Jones of Seaford has a personal reason for opposing abortion. She had an abortion in 1990. She was out of the country, unmarried and had no money. The mother of the baby’s father paid for the abortion, insisted on it, and later paid for her ticket home.

“I knew it was wrong then. I felt a piece of my soul left me that day. I tried taking long baths to try to wash away what I had done. I remember standing on a bridge, ready to jump, when someone threw a piece of garbage out. It was God’s timing, not mine. I saw the garbage and it seemed like all heaven screamed, ‘You are not a piece of garbage.’ I got down,” said Jones.

She later married an abusive man. Women who have abortions tend to engage in dangerous behavior, she said. “I thought I deserved my punishment.”

She had a son, who gave her the gumption to end that marriage. She turned her heart over to Christ, later marrying a minister. “I didn’t tell him about the abortion. God did,” she said. But her husband said, “I’m not leaving you.”

She had problems during subsequent childbirths, almost dying with the birth of her last child.

“I thought I didn’t have the right to say it was wrong. Then at church I spoke. I wrote. A fetus is not a ‘clump of cells’ that should be discarded as an annoyance, but a human being with its own sets of bodily systems separate from a mother — a human worthy of life,” Jones said.

“During COVID it struck me that we were wearing masks, social distancing, postponing surgeries … doing all we could to save lives, but abortion was going strong. It was the height of hypocrisy,” said Jones.

“When the announcement came that Planned Parenthood was coming to Seaford, I decided our greatest weapon as Christians is prayer. I asked the city if we could pray on the sidewalk.”

Jones’ personal efforts were joined by “40 Days for Life,” a grassroots movement to end abortion in which volunteers participate in a 40-day, round-the-clock prayer vigil outside an abortion facility.

Chris Maddox is one of those volunteers. His former church in Maryland was heavily involved. When he heard that Planned Parenthood would be opening a facility in Seaford, he reached out to his minister and other ministers who agreed to become leaders in a 40 Days for Life effort. The result was a campaign that began Sept. 22 and will conclude with a prayer vigil on Sunday, Oct. 31, from 2 to 4 p.m. at Jay’s Nest Park.

Maddox said, “We’re not trying to instigate a negative situation or create a shouting protest. It’s peaceful protesting, mostly through holding signs and praying for an end to abortion and for people connected with the clinic — the women who go there, the babies, those who plan to work in this facility, that their hearts and minds will be changed.”

On Saturday, the pro-choice marchers lined up on one side of Bridgeville Highway, near Planned Parenthood, and those praying to end abortion on the other.

Among the pro-choice marchers was Melissa B. Froemming, president of the Delaware Chapter of the National Organization for Women (NOW), the largest organization of feminist grassroots activists in the United States.

Asked why it is important to have Planned Parenthood in Seaford, Froemming said it’s a matter of access. Women need access to complete health services, and capacity for that is limited in Sussex County, even without abortion, she said. Planned Parenthood will be the only facility in Sussex with that option.

“We have (members) who identify as pro-life, for their own bodies. We don’t want to make that choice for other women. We want to make sure that women have access to the choice to abort if necessary,” she said. “For me, choice is about allowing other women to make that decision for themselves.”

“There is no organization more effective in preventing unwanted pregnancies (than Planned Parenthood). Preventing pregnancy reduces the need for abortion. That’s the real focus, to provide the option for women who need make that choice.” She listed options such as birth control, family planning and “Plan B.”

Froemming continued, “We need more such services in Sussex County, not less.” She noted the closest existing Planned Parenthood facility is in Dover. For a women with no access to transportation, or ability to take time off from a job, or for single moms with kids, that distance “effectively limits access.”

Rita Denney is executive director of the Sussex Pregnancy Care Center in Georgetown, which provides free services including support counseling, material assistance, and education. Denny said, “It is very disappointing that Sussex County has chosen to have an abortion clinic in our area. A woman has a right to choose, but abortion means a child’s life will not happen. That’s why we exist here, to make sure women know there are other options. We explain how abortion is done and give women information about the risk to them. That information is not usually out there — the medical and emotional aspects and the life of the child.”

Nicole Theis, president of Delaware Strong Families and Delaware Family Policy Council, noted in a message to email subscribers: “Abortion clinics are not regulated like a medical surgical center as they should be. The only accrediting body that ‘regulates’ abortion clinics is the Planned Parenthood Federation.”

The email continued, “The only way the city of Seaford can stop this is through an ordinance; however, if the ordinance is targeted at Planned Parenthood or abortion directly, it will not hold up legally….

“The legislators in the area cannot stop this, but they should still know how you feel about it.”

Resources, she said, are available at NotOurCommunity.com.

Gillis Gilkerson is the developer of the Planned Parenthood building and the one next to it. The company was founded in 1983 by Palmer Gillis.

“It’s not my position, whether I approve (of abortion) or not, to tell people how to manage their morality,” Gillis said.

Construction was done under contract, with plans approved years ago. “We did our job. The building was finished a while back,” he said. To blame his company for what goes on inside would like be holding him responsible for how a gun was used if he built a gun manufacturing plant, he said.

Founded in 1916, Planned Parenthood dates back to a nurse named Margaret Sanger, one of 11 children born to a mother who also had seven miscarriages. The current president and executive director was unavailable for comment due to a death in her family.