In an effort to support the victims of the recent devastating tornados that struck communities in six midwest and southern states, a local youth center joined a partnership of businesses sending a trailer load of food and other donations to one of the hardest hit areas in Kentucky. The trailer delivered the product to Mayfield, Kentucky, where a candle factory was leveled killing nine workers.

According to the latest accounts, at least 92 people have died as the result of extraordinary tornado activity that occurred Dec. 10 and into the early hours of Dec. 11. In Kentucky alone 78 people between the ages of 2 and 98 died as the result of an EF4 tornado that cut a path of destruction estimated at 227 miles long packing up to 190 mile per hour winds. 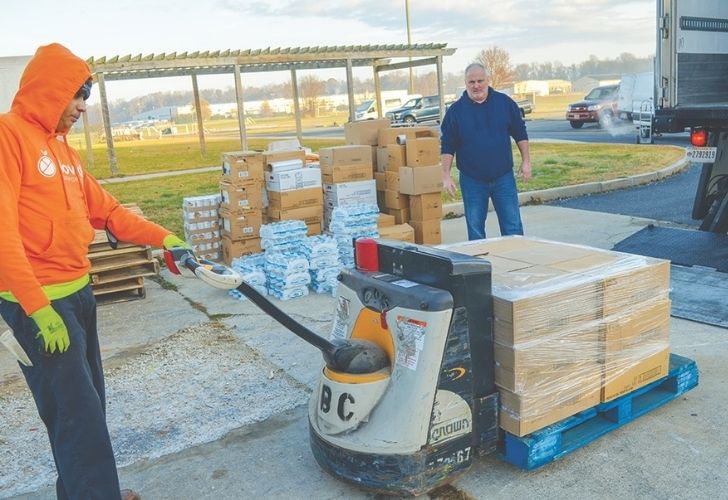 Novick Corporation delivery driver Larry Almestica, prepares to load food product being donated by the Boys & Girls Clubs of Delaware food service operation at the Western Sussex Club in Seaford. The food is being donated for the victims of the devastating tornado that struck Mayfield, Kentucky. After loading the product it was transported by Almestica to a Bentley Trucking facility for transport to Kentucky this past weekend. Also pictured is Seaford Kitchen Manager Chef Gerry Geda, who coordinated the partnering effort. Photo by Tony Windsor

The tornadoes were part of a powerful storm system that tore across Arkansas, Illinois, Kentucky, Mississippi, Missouri and Tennessee. The National Weather Service maps revealed one supercell, which may have been a single tornado or a cluster.

After learning of the horrific toll that the tornados had taken on life and property in Kentucky, Executive Chef Gerry Geda, who is Kitchen Manager at the Boys & Girls Clubs of Delaware food service operation in Seaford, wanted to find out how the youth organization could lend a hand. The kitchen provides daily meals to Boys & Girls Clubs sites and other youth centers in communities throughout Kent and Sussex counties. Daily meals are also prepared and delivered from the kitchen to homeless outreach locations and homeless shelters in a partnership with the Delaware State Housing Authority.

Chef Geda immediately checked his inventory and was able to designate a large quantity of frozen product including pork, beef, chicken and fish, as well as dry goods items such as pasta, sauces, noodles, beans and water to be donated to the tornado victims. The only issue at this point was how to get the product to Kentucky.

“When I joined the Boys & Girls Club of Delaware in December of 2019, I did so with one purpose, to help those who in many instances who do not have the ability to help themselves, in particular our children and senior citizens. The tragedy in Kentucky was an example of a critical need in a community not unlike our own communities here in Delaware,” Geda said.

He said it became imperative for him to find a way to transport the food product. “I reached out to Bill Novick, president of the Novick Corporation, one of our primary food product suppliers. I explained to him what I needed and he in turn jumped into action to help find a transportation solution as quickly as possible,” Geda said.

Novick made a phone call to friend Fred Bentley, president of Bentley Truck Services, Inc. of New Castle. The timing was perfect as Bentley shared with Novick that his firm was providing a trailer for Mitsdarfer Brothers Tree Service of Newark, to assist in transporting a load of donated items bound for Kentucky.

Novick Corporation was scheduled to make a delivery of inventory to the Seaford kitchen and on Wednesday morning, once product was offloaded from the delivery trailer, the food product being donated by the Boys & Girls Club’s Seaford kitchen was loaded and delivered by the Novick truck to the Bentley facility.

Bill Novick said he was excited when contacted by Chef Geda about the relief effort and wanted Novick Corporation to be a partner. “When Chef Gerry called and shared that the Boys & Girls Clubs of Delaware was looking to ship food to aid the storm victims in Kentucky and asked for our help, I knew two things. First, this was definitely something we wanted to be involved with and secondly, I knew who to reach out to handle logistics, my friend Fred Bentley. It was as if our three organizations had been planning this endeavor for months. This just goes to show you what can be accomplished when liked-minded folks team up for good,” Novick said.

Geda said he was amazed at how quickly the relief project came into fruition. “Within the span of a day, by working hand in hand with the Novick Corporation and Bentley Truck Services we were able to do something to help make a difference,” he said.  “I am so grateful to Boys & Girls Clubs of Delaware and Bill Novick for having the spirit of compassion and empathy for those in need, and the generosity of Fred Bentley who provided the final critical piece that enabled us to get this accomplished.  It’s amazing what can be accomplished with true working partnerships.”

For information about how to help the tornado victims contact the American Red Cross by visiting redcross.org, call 1-800-RED-CROSS or text REDCROSS to 90999.