“It’s just really a big honor. Not everybody gets in so its great to see that they have confidence in me,” Breitenbach said. 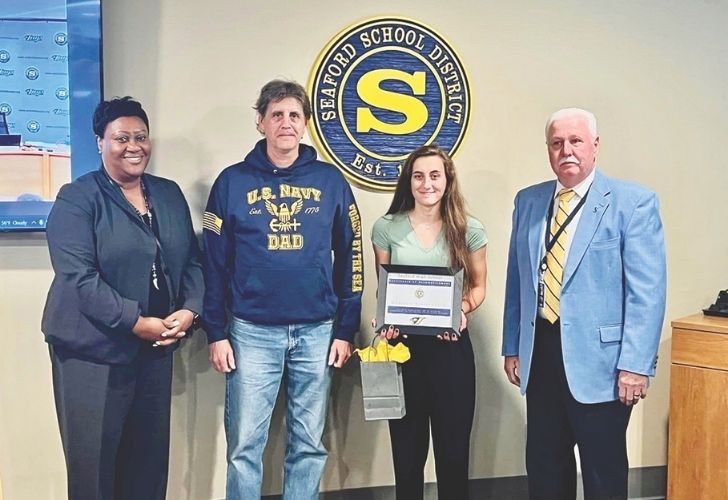 Madelyn, a member of her school’s JROTC, took tours of the academy during her sophomore and senior years and liked what she saw.

“I just kind of fell in love with it. It is a beautiful campus. It felt like a good thing to be a part of,” she said. “It always just sounded exciting to me. Ever since I was young I wanted to join.”

Potential recruits must be nominated by a U.S. Senator or Representative. Breitenbach got two nominations.

From there she did a fitness test, three medical appointments, and wrote three essays. The extensive process lasted from last August to January. She found out she received the appointment in early April.

Madelyn will go through boot camp for seven weeks this summer. In addition to taking part in a number of physical activities, she will also have to learn and memorize Navy facts and material.

Breitenbach is looking forward to graduating and moving on to the next phase in her life.

“It’s been a long ride, there have been a lot of hard things that have been associated with high school,” said Breitenbach.

In addition to ROTC, she has participated in field hockey, swimming, soccer, and basketball as well as rifle and drill, and Key Club. She also has a 4.0 GPA.

“I love it (Seaford High). It’s just great. I made great friendships. I learned how to be a better leader because of it,”Breitenbach said. “I think the best part is the people I met and the friendships I’ve made.”

Madelyn’s biggest support has come from her dad, Mike, who has pushed her to do her best.

“He’s been my biggest supporter. He’s extremely excited about me going. He really wanted me to go to the Naval Academy. He saw that in me before I did,” said Breitenbach.

She said her teachers and coaches have always been there for her and her friends have pushed her to do better and to keep trying.

“Everybody’s been great through the whole process. I’ve been looking forward to this the entirety of my high school career,” she said.

Madelyn would also like to thank all of the teachers and coaches that wrote letters of recommendation for her including: Jerry Sodano, Mike Breitenbach, Becca Moore, Michael Lebow, and Catherine McMahon as well as her ROTC instructors: Commander Lott and Sr. Chief Rowe.