The ceremonies were led by Pete Bohn who said, “We are gathered here today for one purpose, to pay tribute to those Seaford, Delaware Veterans who served or are serving and to those who sacrificed their lives so that all of us living today can enjoy the freedoms laid out by the Constitution and the Bill of Rights.” 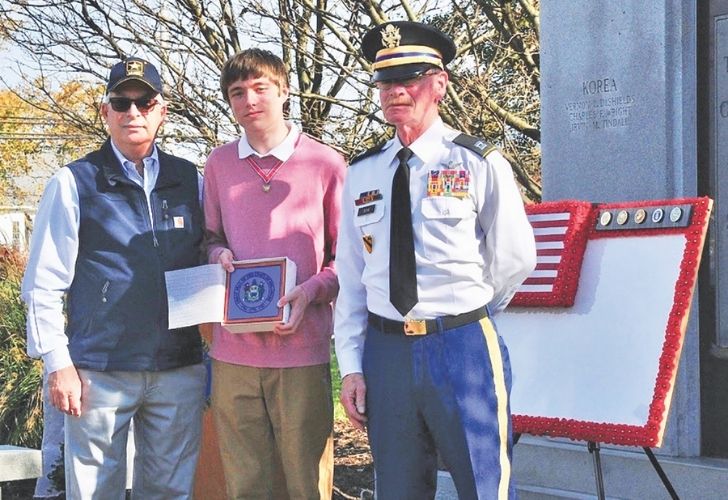 Representative Dan Short presented Carson Hastings with a special recognition for his volunteerism and work on bringing the Hometown Heroes project to the city of Seaford. Pete Bohn also thanked Carson for his work that helps thank the local veterans. Carson is the son of Tim and Virginia Hastings. Photo by Lynn Schofer

Bohn spoke of the importance and duty to pass on the messages of Veterans Day to the next generation so that all veterans will be remembered.

American Legion Nanticoke Post 6 Chaplain Bob McClain opened with the invocation, “We pray that not just today, but every day that we express to our veterans our gratitude for their service to others.”

Bryant Richardson, 21st District State Senator spoke of the need to keep God in the Constitution, Pledge of Allegiance, and prayers, “Our Nation will continue to be a strong nation.”

Senator Richardson said of veterans, “We honor them not only for their sacrifice to this nation but think about what would happen in the world if our soldiers were not here defending the cause of freedom.  May God bless every one of our veterans and the family members who support them.”

Representative Dan Short spoke of WWII Lieutenant Johnson’s return home to Seaford for his final resting place and  the invitation to fly in the B25 Panchito Bomber, “I had no idea about what was getting ready to happen.” Representative Short sat in the gunner position at the nose and said, “I have a deeper appreciation for World War II veterans who flew those planes.”

Representative Short spoke about the Hometown Heroes Project that currently has 36 banners of local hometown veterans which adorn downtown Seaford.  The project organizer, in partnership with the city of Seaford, is Seaford resident and Epworth Christian eighth grader Carson Hastings. Carson is a member of The Children of the American Revolution, President of the Delaware State Society of Children of the American Revolution, 4H member, Seaford Historical Society volunteer and member, junior member of Seaford Volunteer Fire Department, and an usher and member of St. John’s United Methodist Church.

Representative Short presented Carson with a token of appreciation with the state seal. Hastings said, “I just want to thank the people in the community for helping us to make this possible. Without the donation to the project, we would not be able to complete this.”

Seaford Mayor David Genshaw and Councilmen Matt MacCoy and Jose Santos attended the event along with City Manager Charles Anderson and Director of Economic Development Trisha Newcomer.  Mayor Genshaw said, “Today is important that we recognize the quality and care of the people who are willing to serve. It is critically important that we recognize and say thank you to those who did serve.”

The guest speaker was Chief Warrant Officer III Richard A. Norman, United States Navy, retired. The current Commander of VFW Post 4961 spoke to the crowd and shared in his experiences of being separated from his family and missing the birth of his daughter.   Gunner, as many call him, said he would like to focus on the families of veterans. “The toughest job in the United States military, is the military family member.”

He shared of writing letters and numbering them so they would know which letter was written first, “There was no email or text messaging and family would receive eight, nine, 10 letters at a time because mail was never sent or received on schedule.”

Chief Warrant Officer III Richard A. Norman read an excerpt from a letter he wrote to his daughter at the time of her birth in October of 1990 while deployed during Desert Shield/Desert Storm to the Red Sea. “Some of you may not remember but Saddam Hussein said he sank the USS Saratoga in the Red Sea. Our families were freaking out.”

He spoke of being flown to Saudi Arabia to send messages home that everyone was fine. In his letter to his daughter he said, “I have been away from you and your mom, but some people are plumbers, some are salesmen, and your ole’ dad just happens to be a United States Navy Sailor.”

Representatives of Veteran Organizations made presentations of the poppy wreath to pay tribute to fallen heroes and followed with a rifle salute, the playing of Taps, and the National Anthem.

Veterans from 1940 through present day were welcomed to come forward and were honored with the names read aloud of locals who lost their lives serving our country.

“Today is Veterans Day 2021 but every day should be Veterans Day. I want to thank all our veterans and may God bless all our men and women of the Armed forces and their families,” said Bohn.