“These are not normal times,” Sussex County Council President Mike Vincent told those gathered at Seaford’s Memorial Day ceremony. “We can’t go some places. We can’t do some things. But we can celebrate this day.”

As it does every year, the Seaford Veterans Committee, headed by veterans Pete Bohn and Joe Tune, arranged a program to honor the area’s war dead. But in these abnormal times, as the nation struggles with the coronavirus pandemic, the ceremony was not held in Kiwanis Park, the site of the city’s war memorial. Instead, it was held at the Virgil Wilson VFW Post outside of town, where there is plenty of room to practice social distancing. 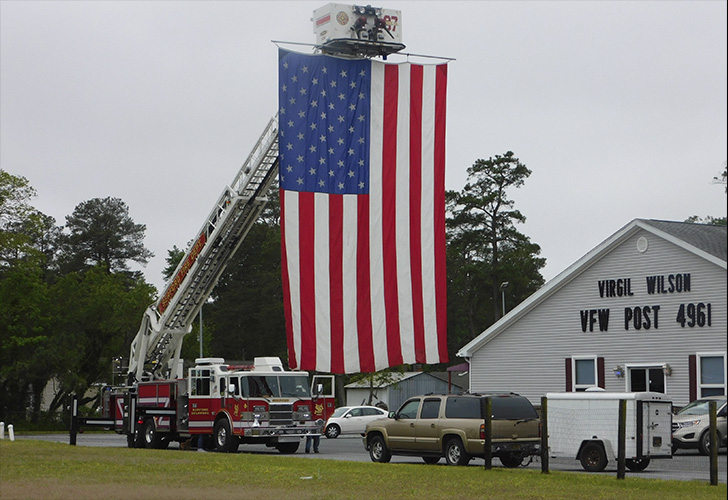 To enable veterans to practice social distancing, this year’s Memorial Day ceremony was held at the Virgil Wilson VFW Post near Seaford. As it always does, the Seaford Volunteer Fire Department had its ladder truck at the ceremony, from which flew the Stars and Stripes.

There was no parade and no guest speaker. The Seaford High School band did not perform, and members of Seaford High’s Junior ROTC program did not carry flags or fire rifles in salute. Rather, recordings of the Star-Spangled Banner and of a gun salute were played over speakers.

But the sentiment was the same as it always is.

“We should always remember those who sacrificed their lives so we could be a free nation,” Vincent said. “Also, we should remember in our prayers those who are serving today, to keep us safe.”

“Sometimes, it’s easy to give up on everything,” Mayor David Genshaw said. “But some things need to continue, and honoring those who gave their all is one of those things.”

About 60 cars were in the parking lot at the start of the 11 a.m. ceremony. Many attendees remained in their vehicles, others, wearing masks, stood next to their car doors.

Bohn, who served as master of ceremonies for the program, addressed attendees from a stage that was set up at the edge of the VFW parking lot.

Members of the veterans committee read the names of men from the Seaford area who have been killed in battle since World War I. Charles Michel, a member of American Legion Post 6 and a veteran of the U.S. Navy, played taps.

State Rep. Danny Short thanked Bohn and his committee for putting together the program. “Many of us would just be sitting at home if it weren’t for this,” he said.

“We didn’t know how this would work, but we knew that we would go ahead, even if no one showed up,” Bohn said. “Every year, we get together to pay tribute to Seaford-area veterans who sacrificed their lives so all of us can enjoy the freedoms guaranteed in the Constitution and the Bill of Rights. Thank you for attending, so that our historic tradition of remembering the fallen continues, no matter the circumstances.”