The Seaford Blue Jays football team improved to 3-0 this season with a 42-10 win over Southern High School last Friday at Bob Dowd Stadium in Seaford.

Junior Jazonte Levan ran 239 yards on 12 carries and scored three touchdowns while Nehemiah Kane had eight carries and 68 yards. Careen Bolden threw for 210 yards and caught a touchdown pass, Aviyon Matthews pulled in six catches for 145 yards and three touchdowns and had one touchdown pass, and Seaford recovered four fumbles. After the game quarterback Careen Bolden said, “We are having a lot of fun and we’re so much better than year.” 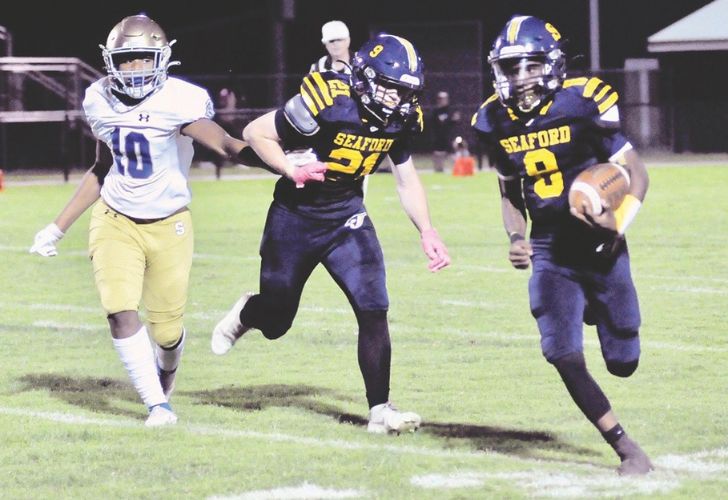 Avanti Purnell turns the corner, completing his run to the red zone for the Blue Jays. Photo by Lynn Schofer

Bolden’s go-to receiver Aviyon Matthews agreed, “We really are having fun but we are all taking it more seriously. Everyone is showing up and wants to win.”

Bolden added, “We are playing together and trusting each other.”

In the first quarter, the first fumble was recovered at the 32 yard-line and Levan carried the ball to the 24 yard-line. Bolden then connected with Aviyon Matthews for a 24-yard touchdown. Leading 6-0, the Blue Jays’ James McNeil recovered a kick-off fumble at the 19 yard-line. Southern’s Joell Simmons read the play and jumped in front of the pass for the interception in the end zone. Seaford’s defensive line jumped on the quarterback when he tripped on the play and scored the two point safety.

The Blue Jays began the next possession at the 20 yard-line. Levan gathered up 28 yards on the first hand off. Matthews then collected another first down at the 11 yard-line and Bolden connected with Matthews for a touchdown and a 14-0 lead.

The regrowth of the Blue Jays football team is showing in their effective tackling and hard hits which are creating turnovers. Seaford defensive tackle Sa’Maury Long jumped on a fumble at the eight yard-line for the third fumble recovery of the first half. The Blue Jays moved the ball and on a slant play Bolden connected with Matthews who carried the ball to the 13 yard-line. Seaford’s Avanti Purnell and Kane moved the Blue Jays closer to the end zone and Matthews took the direct snap for the three-yard touchdown. Isaias Morales Vidaurri kicked the extra point for the 21-0 lead.

The Blue Jays’ Roman Maddox pushed Southern back six yards with a sack at the 48 yard-line and the ball was turned over on downs on the next play. Bolden handed the ball to Levan who opened up the field on a 61-yard touchdown run. The extra point by Vidaurri gave Seaford a 28-0 half-time lead.

In the third quarter, Seaford took possession of the kick off and once again Levan’s speed and agility outran the defense for a 61-yard touchdown. The Blue Jays opened up a 35 point lead and the defense stayed on task and kept Southern out of the end zone.

A 42-yard field goal put the Bulldogs on the board with 2:09 to play in the third quarter. Matthews picked up a bobbled onside kick and ran 34 yards for the Blue Jays. Purnell collected 21 yards on his carry and Khalil Kilgo took it to the one yard-line. Bolden and Matthews switched roles on the next play and Matthews connected to Bolden for a touchdown pass and the 41-3 lead.

Bolden said of the switch, “We have been friends since the first grade. We play basketball together and we know what each other likes and doesn’t like.”

Matthews added, “He really knows how I move and I know how he throws.”

“That was beautiful; I’ve been begging coach Quillin to let me catch a touchdown,” Bolden said of the touchdown.

Quillin rested many players and played out the game giving field time to everyone. Southern would score in the final moments of the game and Seaford closed it down with a knee for the 41-10 final.

“We need to shout out to the OL/DL lines, coaches, and whole team. We can think about this win tonight and then think about Polytech for homecoming, get our minds ready,” said Bolden.