The Delaware Afro-American Sports Hall of Fame will induct Seaford High 1977 alum Chris Webb, who was an outstanding football, basketball, and track athlete while wearing the blue and gold uniform.

Webb said he is proud that he earned 11 varsity letters, played in both the basketball and football Blue & Gold game, and as a senior was named captain in all three sports. “That was awesome because that meant the coaches and teammates appreciated my efforts. It was very rare to play in both Blue & Gold games back then,” said Webb. 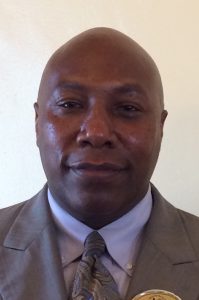 Webb said much of his success is because of the coaches and upperclassmen, “I played for some really great coaches who pushed me. I always had guys who were already in high school who let us play and were mentors to us. They pointed out things that we were doing wrong and showed us how to do it right so we wouldn’t make that mistake again, people like my brother Charles Fountain (current assistant girls’ basketball coach at Woodbridge High School). My brother spent a lot of time teaching me how to play, how to think through situations and think through the game. Guys like Tim Deshields (QB) who was a very good athlete and taught me a lot things.”

Webb said it was bigger than the game. “These guys instilled in us the pride to be a Blue Jay. We couldn’t wait to get out there and play because the enthusiasm was already built in,” said Webb. He added that Marvin Johnson was instrumental to many Seaford youths.

“He played basketball for SHS and in the summer he would get us young guys and organize pickup basketball, football, baseball games. It may be a different sport every day but he was interested in us and helping us get better. There were mentors who were outside of the school like Courtland Thomas who always opened the Frederick Douglass gym. I just couldn’t help but get better, because these guys poured into us,” Webb said.

Webb played for Captain Ron Dickerson on the first Seaford football team to make the state tournament. “I am really proud and it was an absolute team effort from Bryan Short, Vance Belcher, Ricky Morris, Dale Fields, and many more. The team was full of tremendous athletes. Captain Dick pushed us and I can honestly say I don’t think he was surprised. He expected it, he demanded it from us,” he said.

Chris was moved to varsity as a freshman, “there were two injuries and I really did not think I was ready but you either swim or sink.” Webb said it goes back to the upperclassmen mentoring. “It was not intimidating because the older guys had already let me play, I knew them and was hopeful that I could contribute. They encouraged me with great leadership. The team was the whole package,” said Webb.

During a time of change, Webb said of the 1970’s Seaford community, “I think there was some unreadiness but all we really had was each other. You had your home town and everybody knew each other and on Friday night it did not matter if you were black or white, you were at the football game and you were going to support your home team.”  Webb pointed out the non-existence of Sussex Tech or Polytech. ”When they put on the Blue and Gold you came together as a community, it was absolutely wonderful, if we could get back to that sense of community, sense of pride, sense of teamwork. Maybe you might not know each other that well but once we came together on that practice field or Friday night; we were a team and we were a town that came together,” he said.

Chris was nominated as All Henlopen Conference, All State and All Delmarva football first teams.

Webb spoke of the impact of The Pit on football players. “You spent a good portion of the day and week in there. It brought us closer together. The Pit separated us, you knew that if you were in that Pit you earned it and you were special and were playing football for Seaford. You made a commitment to be in that Pit, on game night Captain Dick would give us a fire and brimstone speech before the game and he would give a forearm and knock the door off the hinges and after that you were not going to lose that game. It was fellowship, friendship, and we had a great coach who made sure we played the right way.”

As a freshman point guard for coach Lenny Chasnov, Chris moved up to varsity during the tournament. “I played JV all year and we beat William Penn in the first round and I didn’t play. In the second round we lost to Howard and I played in the game and was high scorer with 11 points.” Chris said the memory is very special, “There were seniors who were playing their last game as a Blue Jay and they all encouraged me.”

Chris gives much credit to coach Chasnov. “I think playing for coach and developing me was a huge part to me getting better. Coach Chasnov allowed me to be the coach on the floor and we made the tournament my senior year,” said Webb.

Chris held the record for the most assists. “I am very proud of that record because it meant I was a team player and played the game the right way. My game was ball handling, passing and if the open shot was there it was my job to knock it down,” he said.

As a track athlete Chris excelled in both the long and triple jump. Coach John Hollis led the Blue Jay track team. “Coach Hollis was a technician as coach he had a way of getting something out of everybody. He could build a team that was fantastic, he was a great coach,” said Webb. “I am realizing how lucky and fortunate I was to have had the coaches I had in my life. I believe whatever success I went on to have in life it was because my coaches really cared for me, wanted the best for me, no halfhearted effort in anything, I really love those guys for what they poured into me.” Seaford won the state championship in 1977. “We were the first track team to win a state championship. We all played two to three sports so this championship was shared with many of the same teammates from other sports,” he said.

As a college athlete, Chris played both football and basketball at Salisbury State. “I can honestly say I was indecisive and thought maybe I could do both sports and in retrospect should have chosen one sport. I needed to focus on one sport and train. I did letter in both sports and am proud of that,” said Webb.

Webb said the classroom was part of the expectation to be able to play sports. “If your teacher asks you a question they had the expectation that you are as prepared in the classroom as you are on the field and court. I had to learn that lesson and you can’t rely on sports to get you there,” Webb said. “College is self-discipline and in my professional career, I learned to be myself and you learn how to help people and it is not always about what I want (just like a point guard) I help others get what they want and need. My clients know that I care and do what is best for their home and put what they need first.”

After college Chris was introduced to powerlifting, “I met Tim Hunter at the gym and he encouraged me to compete. I started to go to meets and started winning and it got the competitive juices going again. I wanted to train harder and get better and we would travel to different meets and you want to see how you stack up to others.”

Chris said the feeling of competitiveness never leaves and at age 38 he competed and went on to many wins while holding the state and regional records for Masters III (55-60 years of age) in the bench press (430 pounds), the squat (500 pounds), and the dead lift (600 pounds). Webb will return to competitive powerlifting when it reopens.

Chris used his childhood experiences and took on coaching himself. “I coached my children and I really enjoyed coaching. I found myself doing drills and plays I learned in high school and college. It was so awesome to see someone push themself like my coaches pushed me. I’ve had some successful teams and athletes who went on to play in college. I just love coaching,” he said.

Chris also said it is important to encourage today’s youth. “They need to know that they can do it. They need to know that not only can they play, they should play. It will build character, build memories. Absolutely play sports, it helps you focus, meet the right people, adults who care, and helps in the classroom,” said Webb.

Chris specifically spoke to Seaford kids, “I want the kids at SHS to be encouraged, work hard, look at some of those trophies, people who came before you, be proud of SHS and see the history. I want to believe we influenced kids to play, to work hard, study hard, believe winning is there for them too and be proud of SHS and of themselves.”

The induction into the DAASHOF signifies many things to Chris Webb but is special because his family will be with him to share the honor. “It is a great honor to be acknowledged that you did your best and you played hard. Having my family there to share this honor with me is very gratifying,” Webb said. “It brought back so many memories and brought in so many calls from teammates, etc. who are excited for me. Just when you think you are forgotten, this is 40 years ago, no one is going to remember me or this game or that game. I can share it with my family and friends. My children, they kind of have to see it for themselves,” said Webb.

Ben Sirman, who was the Athletic Director at the time, said, “Chris was an outstanding student athlete. He was an unselfish leader of the teams he was on. He had the respect of all players and coaches and is well deserving of his induction into the AAHOF.”

Chris said he is appreciative, “I never got to play for him but he put in place those people that were my coaches who were great influences for me. They are all great men and builders of men.”

Chris shared his passion for sports lives on, “At 61-years-old, I still love sports. I still believe I have something to offer to our youth and the love of sport,” he said.

Chris will be inducted along with two other Henlopen athletes in April 2021. Webb is a financial advisor and owner of Webb Financial Services in Dover.