Nanticoke Riverfest cancelled due to virus, Other local festivals to make decisions in the future

As Delaware continues to struggle with the COVID-19 pandemic, Nanticoke Riverfest, Seaford’s annual celebration of its downtown and the Nanticoke River, has been cancelled.

This would have been the city’s 26th Riverfest.

The festival was to be held July 11. Planning for this year’s Riverfest started in January. The decision to cancel was made last week. 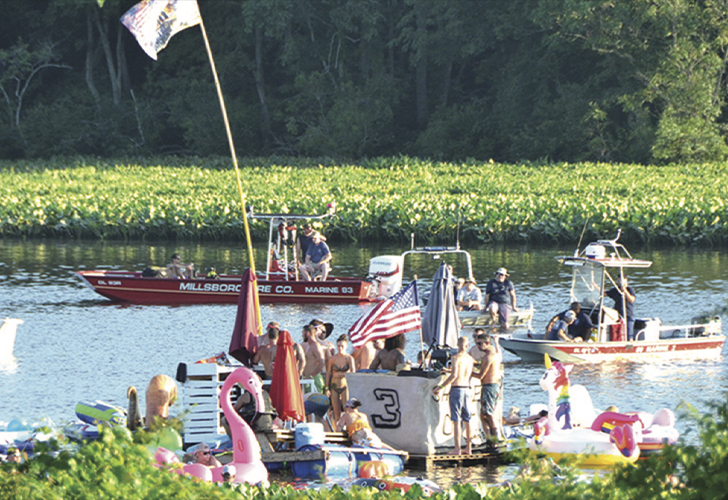 Shown is a scene from last year’s Nanticoke Riverfest in Seaford. The city recently announced that the July event will not take place this year due to concerns over COVID-19. Star File Photo

While the city’s first responsibility is to ensure the safety of its residents and of visitors, having to cancel the festival is disappointing, said city manager Charles Anderson. “The Riverfest is a unique festival that showcases all that Seaford has to offer,” he added. “In the meantime, we would ask everyone to support all the area small businesses that are greatly affected by this crisis.”

Katie Hickey, the city’s superintendent of the parks and recreation department, is the chairwoman of the Nanticoke Riverfest committee. She said that even if the state has eased social distancing requirements by the middle of July, the ban on large gatherings may still be in place.

“Riverfest easily brings in over 1,000 people per year, between vendors, participants and entertainment,” she said.

The Float-In, the festival’s iconic event and held on the Nanticoke, attracted more than 500 participants last year.

“Every part of Riverfest is about bringing the community together, with crowded streets full of vendors, children’s activities and entertainment, and supporting downtown businesses and local musicians,” Hickey said. “It would be extremely difficult to abide by any social-distancing requirements if any of those activities were able to take place.”

At the time of cancellation, Hickey said, only one entertainer, Mike Hines and the Look, had been booked. But “if we were to wait until May or June to cancel, by that time we would have already booked our main stage entertainment, many vendors and even our children’s entertainment,” she added. “Having to [cancel] all of this would be a large undertaking.”

In addition, the city relies on area sponsors to cover many of the expenses of the festival. Most of those sponsors are local businesses, Hickey said, and in the wake of the pandemic, many of them “are either struggling to stay open or have temporarily closed.” As a consequence, they “will not have the money to donate to our event.”

The 26-member Sussex Sassy Dancers, based at the Nanticoke Senior Center, have performed at Riverfest every year since 2015. Director Pat McDowell said that the dancers are sad that they won’t get to do so this year.

“We look forward to this every year,” McDowell said. Dancing before the public “gives us an opportunity to connect with people in our community, of all ages, and to show that dancing is good for the body and the mind.”

While many of its performances have been cancelled for the year, the troupe hopes to perform at the Middletown Senior Center in September, in Frederica in October and in Milford in November. “And hopefully, for the Christmas parade in December here in our hometown of Seaford,” McDowell said.

Erin Nibblett is coordinator of the Miss and Little Miss Riverfest pageants, staples of the festival since its beginning. She said that volunteers with the pageant were very disappointed to learn that the festival had been cancelled.

“We are all really upset,” she said. “The pageant is entertaining for the community, and the girls get really excited. But we understand that we are doing whatever we have to do to keep everybody safe.”

About 20 girls participated in last year’s pageants, Nibblett said. While the registration process for this year’s pageant hadn’t started yet, she anticipated that it would have about the same number of girls vying for titles.

“Cancelling is a tough decision,” she added. “But we will be back next year, absolutely.”

“We are certainly looking forward to Riverfest in 2021 and the event will be better than ever!” he said.

Seaford’s Nanticoke Riverfest is among the first area festivals to be cancelled due to the COVID-19 pandemic. But it may not be the last.

Jamie Smith is operations manager for the town of Laurel. The town is carrying on as normal in planning for its annual July 4th parade and festival, she said. “However, we will be making a decision by the first week in May as to either moving forward on a modified schedule of cancel, if it looks as if some of the governor’s restrictions are still in place,” Smith said.

Similarly, planning for the annual Heritage Day, held the third Saturday in September in Delmar, is on track, said town manager Sara Bynum-King. “We have not made any plans to cancel at this time,” she added. “We are hoping that by September, things will have started to open back up.”

At the same time, she said, “We are taking things day to day. We just really don’t know what will happen.”

The Apple-Scrapple Festival, held the second weekend of October in Bridgeville, is the largest festival in western Sussex, attracting crowds of 30,000 or more. The festival includes a popular craft show, held in the Woodbridge Middle School.

On Friday, festival chairwoman Karen Johnson said that the festival committee has begun planning for the 29th annual festival. “We will begin the sponsorship drive in May, with the hopes of a successful festival on Oct. 9 and 10,” she said. “As we get closer to our festival, we will coordinate and follow any guidelines that Gov. Carney issues relating to large gatherings.”