The 66th annual Delaware Foundation Reaching Citizens (DFRC) Blue-Gold All-Star Football Game was played on Friday, June 17 at Delaware Stadium on the campus of the University of Delaware. The game supports the enrichment of children and young adults with intellectual disabilities.

Delaware student athletes were selected to participate as football players, cheerleaders, band members and school ambassadors. Founders of the game are Bob Carpenter and Jim Williams, two local sports enthusiasts who were parents of children with intellectual disabilities. 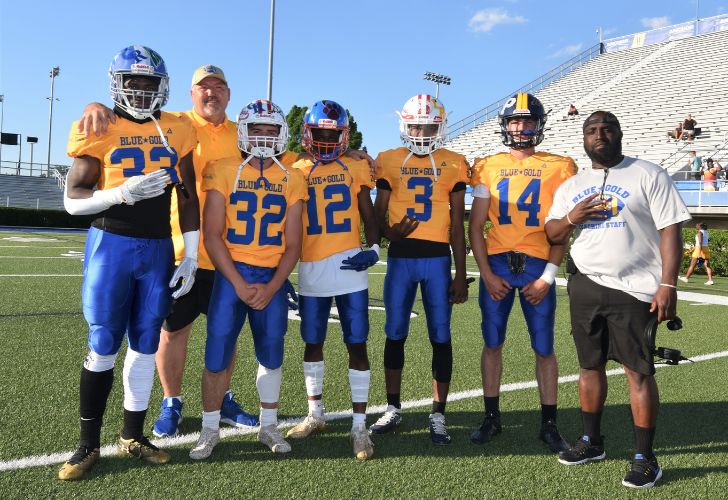 Both teams were comprised of 36 high school senior athletes for each team, chosen as students of outstanding character who were exceptional football players. The Gold team consisted of football players who were recent high school graduates south of the Chesapeake and Delaware Canal. Red Lion Christian School was the one exception, which joined the other schools to the south on the Gold roster. Players were nominated by their own high school football coach, and then approved by their school’s athletic director and principal through a character verification process. All players nominated had to meet Blue-Gold character standards. Once the player process was completed, the coaches then selected the players from the nominees submitted.

The Gold team was defeated by a score of 26-13. It was their first loss in four straight all-star games; they had won eight of the last 10 games. The Gold team took a brief 13-7 lead in the second quarter as Woodbridge linebacker Wyatt Wright recovered a Blue team punt that was blocked by lineman Donavan Mack of St. Georges. Wright was able to pounce on the ball in the end zone after it had rolled from the 20-yard line. The extra point attempt was missed by Dalton Hignutt of Seaford, who had made one earlier in the game.

The game was tied at half-time, 13-13, after Blue team player Devon Green of Delaware Military Academy scored on a nine-yard run. The extra point kick was missed. The Gold team failed to reach the end zone in the third and fourth quarters, while the Blue team quarterback Connor Campbell of Salesianum threw a pair of touchdown passes of 55 and 19 yards to C.J. Coombers of DMA and De’Mere Hollingworth of Howard, respectively. Campbell was later awarded the Outstanding Player trophy.

Wright was the 2021 DIAA Division II Defensive Player of the Year. He led Woodbridge at the linebacker position with 129 tackles (25 for a loss of yardage), eight sacks, four forced fumbles, and three fumble recoveries. Also, he was called on to run the ball frequently to give the starting running backs a break.

Woodbridge head football coach Marvin J. Dooley, Jr. was ecstatic after the game with Wyatt’s performance. “Wyatt always had a high motor that made all of his teammates around him better. Teams ran away from where Wyatt played but he still made plays.”

In the first quarter, Gold fell behind 7-0, as Blue team player Ky’ Shwn Drumgo of Caravel rushed for a six-yard touchdown and the extra point was made. In the second quarter, Gold player Zy’Aire Tart of Middletown caught a nine-yard pass for a touchdown from quarterback Ryan Von Brandt of Appoquinimink, making the score 7-7, as Hignutt made the extra point.