The state champion Laurel Bulldogs played their home opener on Schollenberger field and shut out Brandywine, 45-0, in the battle of the Bulldogs game.

Laurel gained 288 yards with Kylse Wilson leading the team with 12 carries and 186 yards and three touchdowns. Coach Joey Jones is happy with the win but pointed out, “Even though we’ve had some big wins to start, we still have a lot to clean up and improve on.”  Jones said the team’s goal will be to work on the improvements. 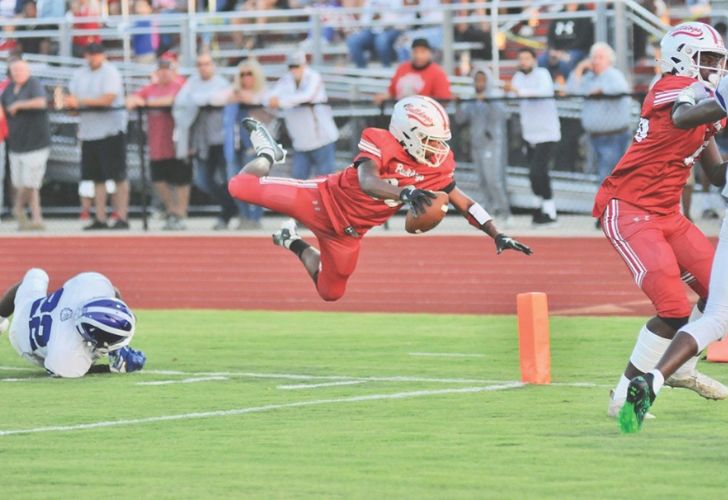 Laurel’s Patrick Belle reaches for the goal line but was called down at the one yard-line in the first quarter of play. Belle would finish the run for the touchdown score on the next play in last Friday’s home win over Brandywine. Photo by Lynn Schofer

Laurel’s Kylse Wilson returned the opening kickoff to the 35 yard-line and on the first play, quarterback Kaden Shockley connected on a slant play to Xavier Limehouse for a 60-yard touchdown run. Mike Gonzalez-Perez made the extra point for the 7-0 score.

Brandywine’s offense could not outrun the speed of the Bulldog line and on the punt attempt Laurel tackled the punter at the 29 yard-line.  Patrick Belle crossed the goal line for a two yard touchdown run and a 14-8 lead.

The Bulldogs’ defense continued their assault and on an attempted pass play, Tate Walls tipped the ball and the deflected pass was intercepted by Kaden Shockley who ran 70 yards for the touchdown. The extra point made the score 21-0.

The Bulldogs retook possession on a recovered fumble by Ny’Aire Farlow and with under three minutes to play in the first quarter Laurel’s Damontra Smith opened it up and ran 50 yards for the score. Kicker Mike Gonzalez-Perez hit his fourth extra point of the quarter for the 28-0 lead.

In the third quarter, Farlow intercepted the ball and Wilson knocked out 32 yards on his first carry of the second half. Less than two plays later Wilson ran the final five yards for the touchdown and Gonzalez-Perez kicked the extra point for the 35-0 lead. On the kick-off Brandywine missed the ball and Elijah Niblett covered it at the 31 yard-line. Wilson added to his repertoire, running 46 open yards for the score and a 42-0 lead.

Laurel was not finished and scored in the final quarter with the clock in running mode when Farlow intercepted the Brandywine pass at the 45 yard-line. Wilson took possession and ran through to the 10 yard-line. After a penalty on the Bulldogs, Walls carried the ball for a Bulldog first down. The Bulldogs eventually settled for a 28 yard field goal by Gonzalez-Perez for the final score of 45-0.

Jones said after the win, “I think the biggest focus is simply on us and our growth. No matter what part of the schedule we are in, we always have to approach everything the same and focus on getting better.”

Laurel goes on the road for the next three weeks before returning home for their homecoming game against Odessa.