The Laurel varsity football team rallied from a 12-6 deficit early to defeat Lake Forest, 27-18, last Friday in the season opener. The Bulldogs scored 21 unanswered points following a Spartans touchdown to start the third quarter and held on to win the home contest.

“We had a good talk at half-time. Our struggles were completely self-inflicted,” said Laurel head coach Joey Jones. “They played the way we expected them to play in the second half.” 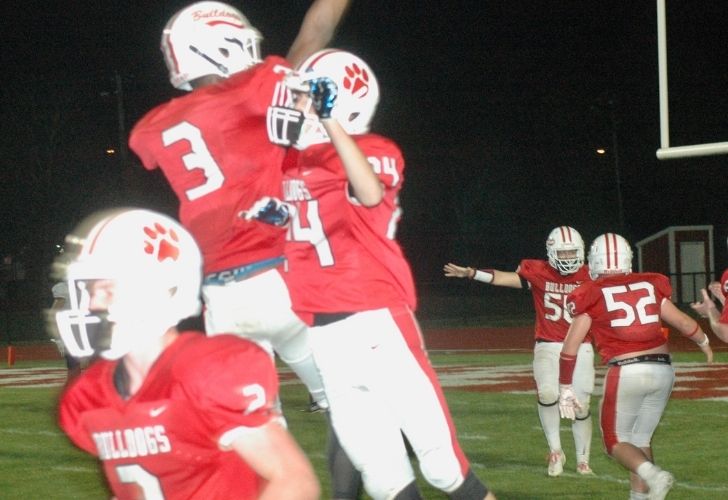 Lake Forest opened the scoring with an 11-yard touchdown run by Michael Brown in the second quarter. Laurel quarterback Kaden Shockley answered with a one-yard run to knot the score at 6-6.

The Spartans opened the second half with the ball on their 39 yard-line. Kendal Smith rumbled 61 yards for a touchdown, but Laurel’s Christopher Dugard made the stop on the two-point run to keep the score at 12-6 with 11:43 left in the quarter.

Laurel started with the ball on its own 11 and moved it upfield on Javier White’s two carries for 13 yards, Shockley’s 13-yard pass to Trevor Collins, an eighth-yard run by Collins, and Jaden Snyder’s two carries for eight yards. On fourth and five from the Lake 35, Shockley tossed the ball to White who threw it downfield to Brady Lee for a 35-yard touchdown. Mike Gonzalez-Perez booted the extra point for a 13-12 Laurel lead with 5:30 left in the quarter.

“If you’re going to compete with teams at the top of the South like Lake, you’ve got to take some chances,” Jones said of the trick play.

On Lake Forest’s next possession, which started on the 17, Laurel recorded a sack for a seven-yard loss. Spartans’ quarterback Damian Galindez completed a six-yard pass to Brown, who was brought down by the Bulldogs’ Preston Chambers and Snyder. Jacob Davis and Dugard combined to record another sack and force a Lake Forest punt.

Laurel’s offense struck on the second play of the possession as White took a toss from Shockley and rumbled 49 yards for a touchdown. Gonzalez-Perez made the PAT for a 20-12 advantage with 2:15 remaining in the third.

The Bulldogs held Lake Forest to three plays and out on the next series as Dugard recorded a sack on third down. Laurel opened the fourth quarter with the ball on the Spartans’ 49. White had two carries for 17 yards and Collins rumbled 28 yards on third and two from the 41. Shockley ran it in on second and goal, but Laurel was pushed back due to a holding penalty. Shockley later tossed the ball to Collins for an 11-yard touchdown and Gonzalez-Perez added the PAT for a 27-12 lead with 8:36 left in the game.

Lake Forest put together a drive thanks to a 46-yard pass from Smith to Nakiem Scott. Smith ran the ball in from five yards out and the Spartans converted the two-point conversion to make the score 27-18 with 7:01 remaining.

Laurel was held to three plays and out, but the Bulldogs’ defense held Smith to a three-yard run on fourth and seven from the Laurel 47 to give the ball back to the offense. Dugard had two carries for 11 yards before Laurel was able to take a knee to run the clock out for the win.

“We knew what we were up against and to see them (defense) get after it even when they have some big plays (against them),” said Jones.

The Bulldogs visit Indian River on Friday night for the first of four straight road contests. Visiting teams are not allowed to have spectators at road contests.