“I was pleased with the work of the kids. Our experience, I think, prevailed today,” said Sussex Tech head coach Scott Layfield. “David’s (Seaford head coach David Rogers) going to have a good team.” 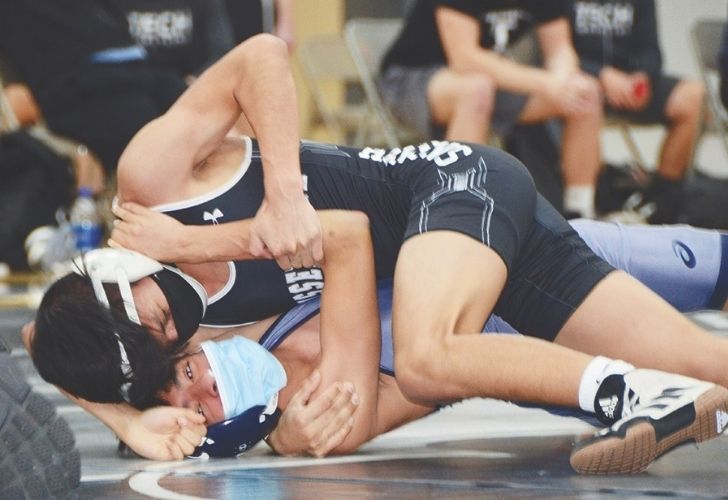 In the 120 pound match, Sussex Tech’s Harold Baker and Seaford’s Denzel Altenor were knotted at 3-3 through the first period in a battle of freshmen. Baker held a narrow 5-4 lead after two and added an escape in the third period for a 9-8 edge before winning, 14-8.

Ravens senior Hunter Ruff (126) recorded a pin with 31 seconds left in the second period and Seaford sophomore Quanteve Hanzer (132) returned the favor with a pin with 26 seconds remaining in the first period to make the score 19-5 (Seaford lost a point due to an unsportsmanlike penalty earlier in the match).

Sussex Tech’s Abdiel Soto-Perez (140) won by fall with 46 seconds left in the first period. Seaford’s Cole Willey (145) recorded a pin with 47 seconds to go in the first before Ravens senior Parker Selzer (152) won by forfeit to increase his team’s lead to 31-11.

Seaford sophomore Sean Martinez (160) held off Christopher Lewis, 8-2. In the 170 pound match, Seaford sophomore Zachary Holmes held a 2-1 lead over Sussex Tech junior Joseph Kane through the first period. Holmes took a 6-4 lead early in the third period, but Kane picked up a point on an escape and later had a reversal with three seconds left in the match for the 7-6 victory.

Sussex Tech’s David DiCampli (182) recorded a pin with 50 seconds left in the opening period, Seaford freshman Hunter Durham (195) won by technical fall (19-3), and Blue Jays sophomore Sa’Muary Long (220) added a pin with 1:42 remaining in the second period of his match. The Ravens’ Seth Layfield (285) added a win by forfeit.

“That was pleasing to see the kids go out there. The conditioning, with the masks, is tough but the kids don’t make excuses,” Layfield said of his team, which was fielding a full lineup for the first time this season.

The Ravens are scheduled to face Dover, St. Mark’s and Cape Henlopen this week. “It’s just getting the kids ready for the state tournament,” said Layfield.