The town of Delmar, along with state police from Maryland and Delaware, the Wicomico Sheriff’s Department, and the Delmar police and fire departments welcomed the Delmar Major League all-star team home from the World Series in Greenville, N.C. in style on Tuesday afternoon. The team received a police and fire escort back to the Little League fields where it was greeted by a large group of supporters. 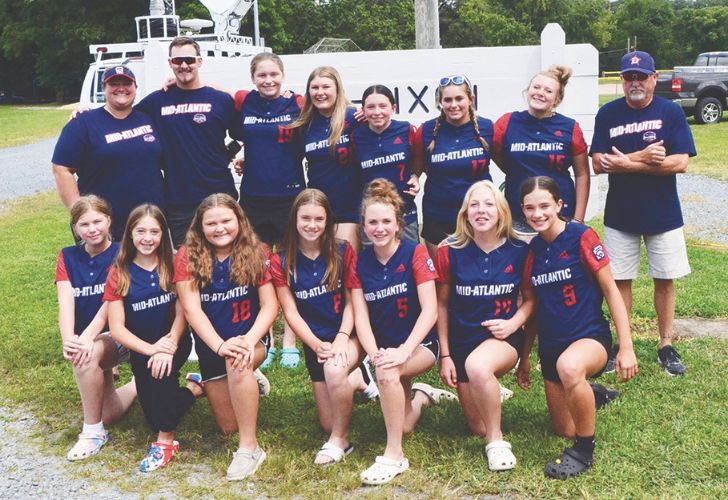 The Delmar Major softball players, coaches, and team mom pose for a photo at the Mason Dixon sign after arriving home on Tuesday. Photo by Mike McClure

“I can’t say enough of how proud you’ve made us as a town and a community,” Delmar (Del.) Mayor Michael Houlihan said.

“I’ve never yelled at a tv as loud as did the other day. You have put us on the map for softball,” added Delmar (Md.) Mayor Ben Jorden.

Delmar manager Mark Naugle has gone to the regionals seven times, but this year was the first time he has taken a team to the World Series.

“To see all of you out here is just incredible. We’ve (Delmar Little League) worked hard to get here,” Naugle told the crowd. “I think we earned this one.”

“In the Little League world, the World Series is the Taj Mahal. Little League (Greenville) did a great job of putting it on. The people were so nice,” said Naugle, in an interview with the Star. “If you had a bucket list, this would be on it. Check it off.”

Naugle said he had to charge his phone two or three times a day because he received so many text messages from community members showing their support for him and the team. “The support has been phenomenal,” he added.

“All of these fans supporting us from back home is really exciting,” said Delmar pitcher Macy Rickards.