“It’s really exciting because we got here as a team and I really love this team,” said Cheyanne Willey. 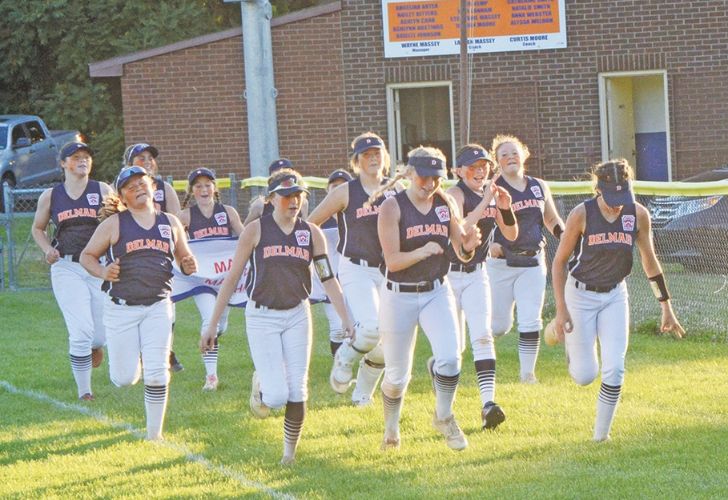 The Delmar Major League all-star softball team is shown taking a lap with its Maryland District banner after winning the district title on its home field. The team went on to win the state and regional titles and is on its way to Greenville, N.C. to play in the World Series. Photo by Mike McClure

“I feel like we could bond more than we already have,” Elle Preston said of playing in the World Series.

The Maryland state champions topped Georgetown, 9-3, in the regional championship on July 28. Delmar’s Audrey Senft collected three hits; Bella Campbell and Macy Rickards each had two hits; and Ella Twilley, Averi Naugle, and Kate Quade each drove in three runs. Rickards struck out seven in six innings as the team went 4-0 in Bristol.

“We’ve known each other for a long time,” Twilley said when asked about some of the keys to the team’s success.

“Everybody gets along,” added Quade.

“When we go into games we already have a positive mindset. We keep each other up,” Preston said.

A few members of the team went to Bristol last year, but the team did not make it as far.

The fact that the team faced a nearby foe in the finals of the Mid-Atlantic regionals made the experience even more special for the team.

“It was pretty cool because even if we lost, someone from Delmarva would go to the World Series,” Maddie Premo said. “It was really exciting playing them.”

The team has been busy preparing for the World Series, taking part in fundraisers and a parade courtesy of the Delmar Fire Department as well as practicing on their home field.

“It’s great having all the support from the town. We’re thankful for their help,” said Quade.

“It’s really great because all the support is helping us get through a tough time,” Rickards added.

The Delmar team leaves for North Carolina this week and will begin tournament play on Tuesday at 10 a.m.