Former Wildcat quarterback looks to join Ellis in the NFL

This year’s NFL draft couldn’t end soon enough for 2015 Delmar graduate Shane Leatherbury of Salisbury. The end of the draft meant an opportunity for Leatherbury to sign with an NFL team, which he did after the Arizona Cardinals expressed an interest in the former Towson University wide receiver.

“It feels crazy, I don’t know if it’s truly sunk in yet,” Leatherbury said. “It felt like the draft was so long this year. I just wanted it to be over so bad. It was definitely worth the wait.” 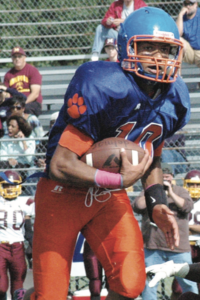 Leatherbury said he had been dreaming of playing in the NFL since before he started playing Pop Warner football for the Wicomico Panthers, perhaps before. He is thankful for the support he has received from the Salisbury and Delmar communities.

“It’s been insane. My phone’s been going off non-stop. It’s helping out a lot,” said Leatherbury. “I’ve always wanted to motivate somebody else.”

Leatherbury is looking to become the second Wildcat playing in the NFL. Another former Delmar quarterback, Alex Ellis, made the highlight reels last season for his special teams play for the Philadelphia Eagles.

“We’re just a small school in Delaware. Delaware’s already small,” Leatherbury added. “I wanted to show everybody that you can make it if you work hard and stay consistent.”

Ellis has the same agent as Leatherbury and reached out to his former teammate right after Leatherbury agreed to sign with the Cardinals. Ellis was home (in Delaware) during the draft.

“He called me all excited. He was more excited than I was,” said Leatherbury.

“I think it’s more exciting than when I made it. I’m just so happy because he deserves it. The kid deserves it all,” Ellis said. “No one understands, day by day, the work that gets put in. His road wasn’t easy.”

Like Ellis, Leatherbury’s path to the NFL was not automatic. After playing his freshman year at Seton Hill (Division II) where he caught 37 passes for 282 yards and two touchdowns after making the transition to wide receiver, Shane came back home and attended Wor-Wic Community College while searching for a Division I school to transfer to.

“There was a time I wanted to give up. I was never negative about it,” Leatherbury recalled.

Leatherbury was given an opportunity at Towson University as a walk-on (as Ellis did with the University of Tennessee), starting in 2017. He started four games and had 30 receptions for 296 yards and two touchdowns in his first season with the Tigers.

Shane’s first season didn’t go as well as he wanted it to, but he excelled during his junior and senior seasons. “My junior year it kind of came back to me,” said Leatherbury.

He made the All-CAA first team in 2018 and made the second team in 2019. Leatherbury is in the top-10 in Towson history in receiving touchdowns, receptions and yards, finishing his college career with 149 catches for 1,848 yards and 21 touchdowns.

“He’s (Leatherbury) worked hard the last few years. I think Skitter’s (Ellis) been a great influence,” Hearn said, adding that Ellis encouraged his friend to go to Towson. “He’s always been a great athlete, he can do a lot of things. He has worked to get to where he is.”

“The kid just works so hard. I truly admire him. He brings that energy everywhere he goes. It just makes me smile because he had to go get that. I’m glad he’s in it with me,” said Ellis, adding that there is a mental and physical grind involved in playing Division I football. “There are a ton of great athletes that come out of Delmar and Sussex County. We’re just two of the lucky ones. Hopefully we’re not the last ones.”

Making the transition from a high school quarterback to a wide receiver took some time, but Leatherbury says Towson University wide receiver coach Justin Harper, who played for the Baltimore Ravens, helped him make the adjustments.

“It was just tougher to learn where the windows were. Being a quarterback helped,” said Leatherbury. “He (Harper) made it so easy to be a real receiver. He’s the one that made me into a receiver.”

“We would have loved to have had him as a receiver and a back, but he made us a threat under center,” Hearn said. “They (Leatherbury and Ellis) could have done other things here, we needed them (at quarterback). We owe a lot of our success to them.”

While the dream of playing in the NFL was in his mind, it wasn’t Leatherbury’s focus during his time at Towson.

Now he has new teammates, including future Hall-of-Famer Larry Fitzgerald and All-Pro DeAndre Hopkins, both accomplished pro wide receivers. He is looking forward to learning from them while competing for a spot on the team.

“This is probably one of the best places I could have dreamed of landing. I couldn’t have started my career in a better place,” he said. “I’m just pretty much going with the flow.”

Ellis is entering his fifth NFL season this fall. His journey has not been an easy one either.

Alex signed with the Tennessee Titans as an undrafted free agent following the 2016 draft. After being waived by the Titans in the final round of cuts, he was signed to the Jacksonville Jaguars practice squad, working his way to the active roster and playing in his first NFL game on Nov. 26, 2016. After being waived by the Jaguars on Sept. 2, 2017, Ellis was signed to the New Orleans Saints’ practice squad on Nov. 28, 2017 before being waived on May 7, 2018. The next day he was claimed by the Kansas City Chiefs, but went on injured reserve on Oct. 2, 2018 after going unclaimed on waivers.

“It’s definitely been a journey. I’ve been surrounded by great people (since my rookie year),” said Ellis. “I have a lot of guys keeping me under their wing. Even now I’m still getting taught.”

Ellis says he has been around some great tight end groups and coaches, calling Philadelphia one of the better groups he’s been with.

“There’s no fan base like Philadelphia. They bleed green and I’m glad to be there,” he added.

After being hampered by injuries the last two seasons after making the active roster for the Chiefs and Eagles, Ellis is hoping to avoid injuries this season. With four seasons of NFL experience, he shared some advice with Leatherbury.

“He’s there for a reason, somebody saw what he had to give and they saw what he could contribute to their team,” said Ellis. “Don’t let your mind dictate if you will play or not or if you get cut or not.”

“That is one guy I look up to in the league as a professional athlete and a professional,” Ellis said of Harmon, nicknamed “The Closer”.

The biggest influence and support for Ellis, whose grandfather played for the Eagles before coaching at Laurel High, is his family.

“My family is one of the biggest influences in my life, they’re my rock. I’ve been blessed with the people around me. My family is everything,” he said.

Alex is also thankful for the support of his friends and coaches in Laurel and Delmar.

“If it wasn’t for these people, none of this would be possible,” said Ellis. “It’s such a small area but the people in it are second to none, just good people. When I come home I’m like ‘man this is home’.”

For Ellis, and Leatherbury, the offseason is a little different given the impact the coronavirus has had on the sports world, and the world in general. The off-season is a little longer and coaches stay in touch with players through video calls, sending different workouts for them to do. But this is a minor inconvenience compared to what health care workers and other essential workers are going through in the battle against the virus.

“At this point, sports are what they are. They’re (healthcare workers) all on the front line. I’m super thankful for all of them,” said Ellis, whose family members and girlfriend are doctors and nurses who have little downtime in between 12 hour shifts. “This virus is so crazy and they just look it in the eye and say ‘we got this’.”

With all games on hold right now, the players are adjusting to a virtual off-season, as they did a virtual draft. Either way, Hearn and the Delmar coaches believe Leatherbury and Ellis will do their best. Both players had to work hard to become college players before working to make the NFL.

“We’re just real proud of them. We know that they know how we feel about them,” said Hearn, who called his two former players smart, intelligent, and hard working. “I know both of them are working out. If work has anything to do with it, they’ll be as good as anybody.”

“It’s not all about them. They talk about their team and their coaches,” Hearn added, calling Ellis and Leatherbury humble. “They’re students of the game and they’re real intelligent. They’ll pick things up really fast. I’m excited to see what happens for them.”