The Delmar varsity field hockey team netted six first half goals on its way to a 9-0 home win over Lake Forest in the state quarterfinals last Saturday in Delmar. The Wildcats (#1), who were able to host the Spartans despite a large amount of rain on Friday night and Saturday morning, hosted fourth ranked Newark Charter in the semifinals this Wednesday at Sussex Academy (see story in next week’s Laurel Star). 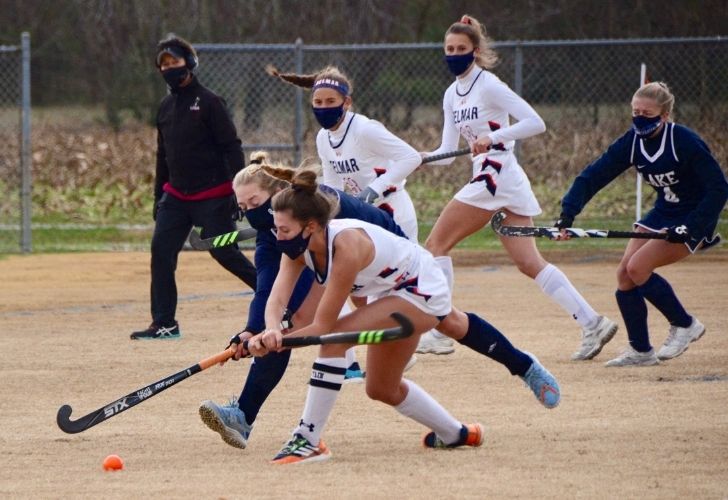 Delmar’s Maci Bradford takes a shot on goal early in last Saturday’s state quarterfinal field hockey game in Delmar. Bradford later scored the first goal of the game and had four goals in the 9-0 win. Photo by Mike McClure

“It feels great. This is what we’ve been waiting for all season. We’re just happy that we made it this far and COVID hasn’t messed it up,” said Delmar sophomore Josie Hollamon. “We’re focused on one game at a time.”

Delmar placed a tarp on its home field and was able to play Henlopen South foe Lake Forest after having a bye in the first round. The Wildcats topped the Spartans, 10-1, during the regular season.

Delmar’s Maci Bradford took a pass from Hollamon and scored the game’s first goal with 13:24 left in the first quarter. Laura Rogers found Jordyn Hollamon on a corner (11:38) to give the Wildcats a 2-0 lead. Josie Hollamon (4:12) and Rogers (2:04) each added a goal for a 4-0 advantage through one period of play.

In the second period, Bradford slammed home a goal with 14:36 left in the first half after taking a pass from Josie Hollamon. Hollamon scored the team’s sixth goal with 8:08 remaining. The Wildcats outshot the Spartans, 14-0, and held a 6-2 advantage in corners in the first half.

Bradford scored three more goals in the third period to extend Delmar’s lead to 9-0. Jordyn Hollamon had an assist on the first goal, with 14:13 left in the period. Bradford’s second goal came with 13:30 remaining and the third goal was scored on a corner with 9:26 to go off a feed from Josie Hollamon.

Delmar held on to win the game, 9-0, outshooting Lake Forest, 14-1, while holding a 12-2 advantage in penalty corners. Wildcat goalie Kelly Davis recorded one save in the victory.