The Laurel varsity wrestling team entered last Friday’s road match against Lake Forest needing one more win to clinch the Henlopen South title. The Bulldogs led the Spartans, who were also undefeated in the Henlopen South entering the dual meet, through the first half of the match and then came back from a six point deficit to win, 36-27.

“I took over when these kids (seniors) were freshmen. We’ve been battling, we finally got one,” said Laurel head coach Zach Toadvine. “I hope the kids just feed on this and roll with it in conference and states.” 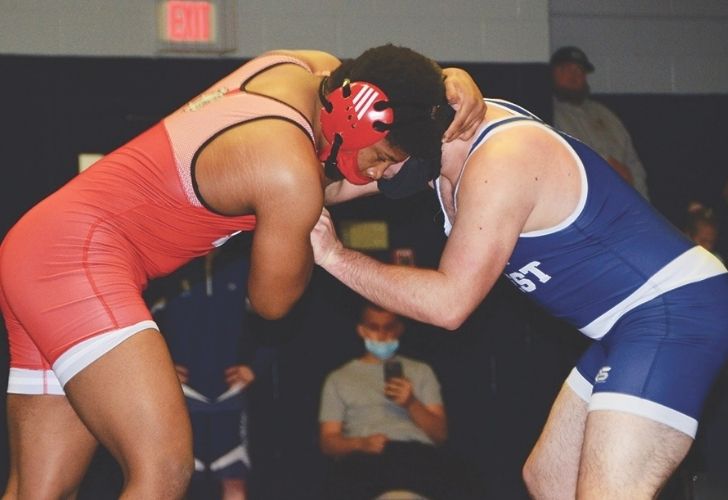 The Bulldogs’ James Johnson, left, prepares to take down Lake Forest’s Travis Wyatt before recording a pin in the first period of the 195 pound match. Photo by Mike McClure

“It (winning the South) feels good, it doesn’t feel real yet,” added junior Matthew Pusey, whose pin in the final match sealed the win.

Laurel was scheduled to host Indian River this Wednesday in the first round of the state dual meet tournament. “I know we have some good competition but I believe in my team,” Pusey said.

Lake Forest’s Case Dempsey (126) answered with a pin before the Bulldogs’ Kyler Weaver held on for a win in the 132 pound match. Weaver jumped out to a 4-1 lead in the first period. He survived a near pin at the end of the second and went on to win, 11-7, to up the Laurel lead to 18-6.

In the 138 pound match, the Spartans’ Cael Moyer led Laurel’s Nathan Austin, 2-0 after one period and 4-2 after two. Austin tied the score at 4-4 in the third before Moyer got an escape to win, 5-4. Lake Forest put together three more wins to take a 24-18 lead as Abdullah Ahmad-Statts (145) edged Laurel’s Xavier Limehouse, 5-3, and Nurrideen Ahmad-Statts (152) and Cole Dempsey (160) each recorded a pin.

Senior James Johnson (195) recorded a takedown and pin 40 seconds into the match to give Laurel a six point lead. Lake Forest’s Cullen Parsell kept his team alive with a 3-2 win over Brayden Hearn in the 215 match.

With Laurel ahead, 30-27, the Bulldogs needed a win in the 285 pound match to get the victory. Pusey held a 4-1 advantage before winning by fall with 1:05 left in the first.

“It felt good. I knew I had to come up big for my team,” said Pusey. “We’ve got a good bond. We stay close, we all hang out together.”

Laurel was scheduled to face Henlopen South foe Indian River on Wednesday in the opening round of the Division II state dual meet tournament.