The Woodbridge varsity football team pulled away from Indian River in the second half of last Friday’s 36-3 road win to earn its second win in five days. The Blue Raiders opened the season with a road win over Lake Forest on Monday after postponing the first two games of the season due to a two-week quarantine at the Woodbridge High School.

“To get two wins in the span of four days is nice,” said Woodbridge varsity head football coach Jed Bell. “To get the opportunity to play is great.” 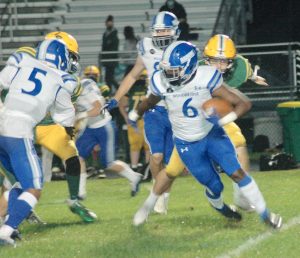 Tough field conditions on Friday night meant a different style of game for the Raiders than the opener on Monday. Due to the closeness between the rescheduled game against the Spartans and the contest against the Indians, Bell said his team did very little physical work in practice in the time between the two games.

On Friday, Woodbridge’s offense was held to three plays and out on its opening possession. The Raiders’ Wyatt Wright made a pair of stops to force Indian River to punt from its own 49 yard-line. The Indians’ Dalton Hall recovered a Woodbridge fumble on the Raider 37.

The Raiders’ defense stuffed Indian River quarterback Tyler Bowen on third and three from the 30, but a personal foul penalty on Woodbridge set up first and 10 from the Woodbridge 14. On fourth and 11 from the 15, the Indians’ River Vickers booted a 31-yard field goal to make the score 3-0 with 3:29 left in the opening quarter.

The Raiders answered with a scoring drive, starting at the Indian River 45. Jaden Bacon fought hard for five yards and a first down on third and four from the 39, Michael Plummer had a seven-yard run, quarterback Jordan Evans completed a 21-yard pass to Derek Cannon, and Evans ran it in from a yard out. Woodbridge kicker Ian Hayes added the extra point to make the score 7-3 with no time remaining in the first quarter.

Woodbridge scored again after holding Indian River to three plays and out at the start of the second quarter. Bacon had a 14-yard run before rumbling 29 yards for a touchdown for a 13-3 Raider lead (7:28).

Indian River started with the ball on the Woodbridge 37 following a punt return late in the first half. Vickers’ 41-yard field goal attempt fell short with 13 seconds remaining in the half as the Raiders took the 13-3 advantage into half-time. Bacon led the way with 75 yards rushing and a touchdown.

Indian River got a second chance on its first possession of the second half on a questionable running into the kicker penalty on the Raiders, but Woodbridge’s defense eventually forced another Indian punt.

Kenny Newton scampered 27 yards on a run, Bacon had a 14-yard run, Plummer added a 22-yard run, and Bacon plunged into the end zone from two yards out. Newton added the two-point run for a 21-3 Raiders’ lead with 2:22 remaining in the third quarter.

The Woodbridge defense forced another Indian River punt at the beginning of the fourth quarter. Bacon scampered 76 yards for a touchdown and Newton had another two-point run to up the Raiders’ lead to 29-3 (10:58).

Plummer capped the scoring with a 60-yard touchdown run and Hayes booted the PAT with 5:33 remaining for a 36-3 advantage. Bacon ran for 176 yards and three touchdowns, Newton had 64 yards rushing and two two-point runs, and Plummer added 69 yards and a touchdown in the win.

“These kids are hungry. They bought into what we’ve got to get done,” Bell said. “They’re (Indian River) tough kids. You could tell they were definitely prepared. They came out and punched us in the mouth early on. “