Woodbridge High School graduate Dajon Emory (2014) was part of the final Blue Raiders football squad to play a game at Filmore Clifton Stadium. The team lost to St. George’s in the semi-final round of the DIAA State Tournament.

Dajon recently returned home and said the new football stadium was a great place for the team to begin to dominate. “I really believe we began to lay the ground work for the guys to believe in themselves and to become state champions. We have had some exceptional players go through Woodbridge in the last eight years,” he said. 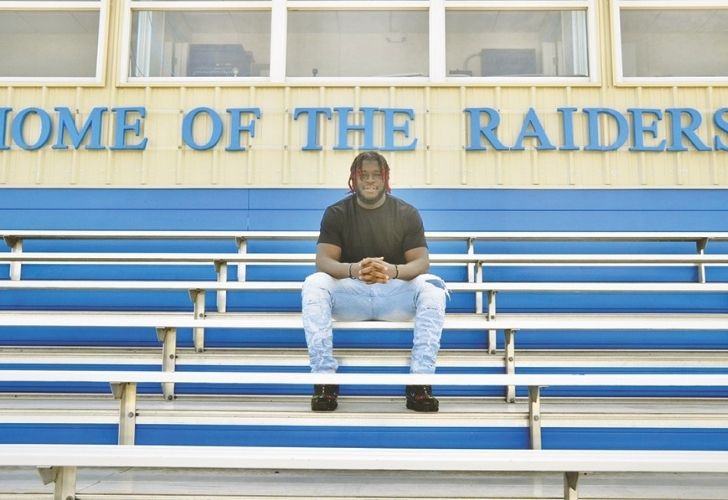 The defensive lineman has since worked and prayed his way through college and is currently playing professional football in the Champions Indoor Football league.

“I wasn’t a big academic student and didn’t think college football was an option,” Emory said, reflecting on his high school studies. “Mr. Towers and coach Manlove let me know that it is not about being the best academically but you have to know how to use your resources to be the best student you can be.”

Dajon entered Lackawanna Junior College in Pennsylvania and said this is where he was provided the time to get acclimated to the expectations of college. “I used things like study hall and was open to people who wanted to help me. It is much easier when you accept help,” said Emory.

In two years with Lackawanna, he had 23 tackles, 5 sacks, and averaged 2.6 tackles per game. His play caught the attention of Arkansas State, where he completed a four year degree in general studies with a focus in sports management.

“Hopefully I’d like to be an athletic director or someone who has a positive impact on youth,” he said.

In his first year of playing, Dajon earned 10 tackles and was on the Athletic Director’s Honor Roll. In his senior year, Dajon earned a total of 30 tackles. He said the hard work was beginning to show on the field. Dajon believes too many young athletes give up before believing they could play at DI level.

“I went to junior college and earned my way. I am not the only one and I believe there could have been a lot more DI players experiencing college. It is all about choices,” said Emory. His advice, “Be a great person in this world and it is who you know and never look past someone.  Accept help and resources and never be too prideful in taking a hand willing to help you. We all need help in this world.  Smile and show your personality to people.”

Dajon said his home support, personality, and beliefs allowed doors and opportunities. “First and foremost I want to thank God first who blessed me with an independent mind. However, my parents Deborah Washington and John Emory pushed me to be a great individual. They  taught me discipline in all areas and to be comfortable within myself. I may not have had the nicest shoes or clothes but my dad told me, ‘It is not what you look like but what comes out of your mouth’,” said Emory.

Dajon said the lessons gifted to him by his parents helped him look past poor choices that send some young people in the wrong directions, “That went a long way with me. People love you as a person and not by what you wear. My parents taught me to have great discipline and luckily I can say I have never worn handcuffs or been incarcerated,” Emory said. “I have friends who have been incarcerated and we still keep in touch and they get joy out of seeing what I do and accomplish. I am grateful for all of them.”

Dajon said the bond built through teamates and coaches will be life-long friendships, “Every level I have gained brothers and relationships are endless. I am so grateful for everyone.”

After college Dajon had his focus on the big (NFL) dream. Emory had a Canadian Football League tryout in 2018 and in 2019 the Green Bay Blizzards signed him to play in the Indoor Football League (IFL). Then COVID shut things down but Emory did not allow that to derail his dreams.

“I had to use film from that season for the 2020 season. I was offered an opportunity to play professional football in the IFL and must say it was a great decision that I made and it showed people that I could still play. A lot of people are supporting me and keep their love and support close,” said Emory.

In February, Emory signed on to play for the Sioux City Bandits in the Champions Indoor Football league. Emory said he is a professional athlete who made the all-rookie team, was second team in the IFL,  and led in tackles for loss.

Indoor football is played on a smaller playing field and is 8 on 8, “Don’t be mistaken; we hit hard and it is fast. The body still feels the pain,” he added.

The fan base is large and Emory said the kids are the best part of playing. “Indoor football has a huge following. They fill the stands where the fans are close, which allows us to interact with kids and families,” said Emory who also said the games are much more affordable. “I go into the school and read to the kids. I am a big dude so they get to see my bubbly personality. I do ads for the community, I like talking to people and it is important to have a positive image. If you look at me, I am a big African American male with dreadlocks. People may have a perception of me until they talk to me. I want the kids to know you have to be a great person, well spoken, and be real.”

Emory said he is committed to taking care of his body, which includes daily workouts including yoga. “I used to laugh at yoga but it has helped me tremendously by stretching my body and limbs and helps me run faster, jump higher, move better. The yoga instructor is a small 5’2” woman and she is bending in all different ways,” he said. “I learned the benefits  and it is very important.”

Emory also is in the weight room and works out daily to improve his skill.

The season is just beginning, but Sajon had an exceptional opening game with six tackles, two blocked field goals, one recovery for a touchdown, and one sack for loss.

“The NFL dream can make you discouraged but a simple ‘I love you’ keeps me going,” said Emory, who still aspires to reach the NFL, “I want to keep chasing my dream until I can’t and one day I want to be able to tell my future children or other children to keep chasing their dreams.”

Emory said of professional football, “It can break your heart, it is a business. Kids don’t understand. It is not personal, it is harsh business and you have to have thick skin for it. You have to keep feelings out of it because they have to do what they feel is best for the organization. We are not getting any younger and new prospects are coming up every year. Hopefully it presents itself. Football has brought me so many blessings, travel in the country and world, friends. Our story is already written and this game will owe me nothing. As long as I can make a positive impact on the community I will be at peace.”