The Woodbridge and Delmarva Christian varsity girls’ basketball teams each showed why they reached Monday’s state quarterfinal game in Greenwood. Both teams relied on a team effort on both ends of the floor, but the Raiders’ defense and clutch shooting down the stretch proved to be the difference in their 70-64 home win.

Delmarva Christian jumped out to an 8-2 lead as Sierra Troyer scored four points and senior Grace Fetterman had a basket and an assist. Woodbridge freshman Reghan Robinson hit a pair of three-pointers to keep the Raiders within five at 13-8. 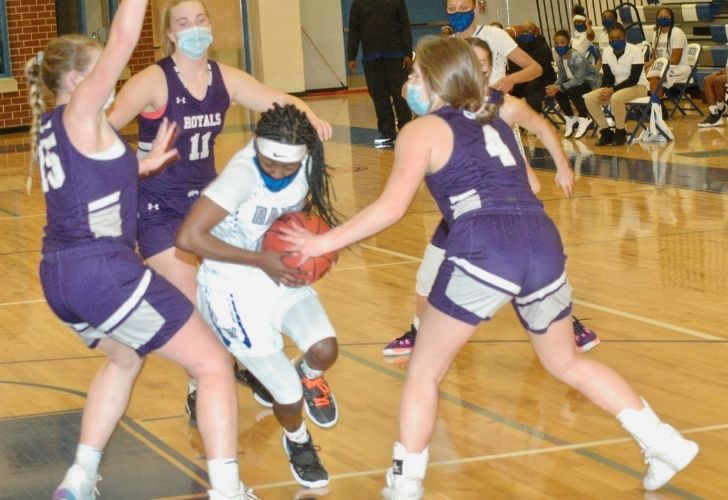 Woodbridge senior Janeira Scott takes the ball to the bas- ket against the Delmarva Christian defense. Scott scored 19 points to help the Raiders to the 70-64 win in the state quarterfinal game. Photo by Mike McClure

Troyer added a basket and an assist to extend the Royals’ lead to seven before Raiders’ senior Cha’Kya Johnson scored off a feed from Janeira Scott at the end of the first quarter to make the score 17-12.

Troyer led Delmarva Christian with six points as all five Royals’ starters scored in the first period. Robinson and Johnson each netted six points for the Raiders.

Troyer opened the second quarter with a three-pointer, but Woodbridge answered with an 8-0 run to knot the score at 20-20. Payton Keeler and Robinson each hit a three-pointer and Scott scored off a feed from Sierra Smith.

Robinson hit another three-pointer and Scott converted a three-point play for a 28-24 Raiders’ lead with 2:15 left in the opening half. Fetterman answered with a three-pointer and Troyer scored off an inbounds pass from senior Kandice Schlabach before Scott hit a jumper at the end of the half to put Woodbridge ahead, 30-29.

Robinson led all scorers with 12 first half points while Scott scored all nine of her points in the second quarter. Troyer paced the Royals with 11 points, Fetterman had six, and Schlabach added five points in the first half.

The two teams exchanged leads early in the third quarter as Troyer scored off a feed from Ainsley Bell, Scott went coast-to-coast for a basket, Fetterman made a pair of free throws, and Robinson hit a three-pointer for a 37-35 Woodbridge lead. Johnson scored seven points at the end of the quarter before Schlabach made a steal and found Bell who hit a shot at the buzzer to cut the Raiders’ lead to seven.

Johnson scored off a pass from Scott and found Robinson for a three-pointer to increase the Raiders’ lead to nine. Troyer hit a three-pointer and Evelyn Jensen made a pair of free throws to make it 56-53.

Down by five with 2:03 left in the game, the Royals began fouling Woodbridge to stop the clock and force them to make foul shots. Scott went 10-for-10 down the stretch to seal the 70-64 victory.

Scott scored 10 of her 19 points in the final quarter, Robinson scored a game-high 23 points, and Johnson added 19 points for the Raiders. Troyer tallied 20 points, Fetterman had 15, Schlabach added 12, and Bell contributed 10 points.

With the win, the Raiders (#10) advanced to the state semifinals against third ranked Sanford on Wednesday. See next week’s Seaford Star for more Woodbridge girls’ basketball coverage.