Bulldogs use second half surge to top Vikings, win 1A state championship

The Laurel varsity football team trailed St. Elizabeth’s most of the first half of last Saturday’s 1A state championship game in Newark, scoring with 17 seconds left in the half to take a 14-8 lead. The Bulldogs solidified their lead with two more touchdowns in the second half to win their first state title in 30 years, 28-14.

“I’m just as proud as can be. We said go get it and they did it,” Laurel head coach Joey Jones said. 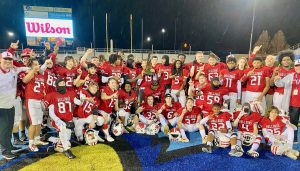 “Ever since I first watched them play (as a kid) I wanted to come out here and win a championship,” said Laurel senior Javier White. “It was a dream and we did it.”

White had a 34-yard run on the opening possession of the game, but Laurel was forced to punt following sacks by Eric O’Neill and Andre Green. The punt was blocked and the Vikings got the ball at the Bulldogs 43 yard-line.

St. Elizabeth quarterback Brett Smick completed a 22-yard pass to Thomas Schiavoni on third and eight from the 41 before finding Christopher Caracter for a 26-yard touchdown. Quasim Benson ran in the two-point conversion to give the Vikings the 8-0 lead with 6:49 left in the first quarter.

Laurel answered with a drive, starting at its own 44. White had a pair of seven-yard runs before Kyler Weaver burst for a 35-yard run to move the ball to the Vikings’ five. White ran the ball in for a touchdown on the next play, however, Kylse Wilson was stopped on the two-point run to keep the score at 8-6 with 4:18 remaining in the opening quarter.

Laurel recovered the ball on the St. Elizabeth 32 on the kickoff, but turned the ball over on downs when a pass on fourth and 14 from the 36 fell incomplete. The Vikings moved the ball into Laurel territory as Benson had three carries for 13 yards and Smick completed a 20-yard pass to Caracter. Snyder dropped Benson for a three-yard loss on third and six from the 21 and Smick’s pass on fourth and nine from the 24 was incomplete.

Laurel quarterback Kaden Shockley had a 20-yard run on the Bulldogs’ next possession before they turned the ball over on downs. Laurel later stuffed the Vikings’ runs to set up fourth and 12 from the Laurel 36 with White knocking down Smick’s pass.

The Bulldogs were forced to punt the ball with 1:29 left in the half, but the Laurel defense gave the offense one more chance to take the lead. Senior Charlie Cannon intercepted a Vikings’ pass on third and six from the 32 and gave his team the ball on the St. Elizabeth 28 with 26 seconds remaining. White wasted no time, running 28 yards for a touchdown, and Wilson ran in the two-point conversion to give Laurel the 14-8 lead with 17 seconds left.

Laurel closed out the first half with a sack by James Johnson and Patrick Belle to take the six point lead into the locker room.

“I feel like we have one of the best defenses in the state,” Jaden Snyder said after the game.

The defense went back to work in the third quarter as St. Elizabeth started with the ball at its own 34. Benson was dropped for a loss by Snyder and Brayden Hearn. Hearn then recorded a sack and the Vikings were forced to punt. The ball sailed over the punter on the punt attempt and Belle tackled the punter at the three to give the ball back to the Laurel offense.

Wilson plunged into the end zone on first and goal and kicker Mike Gonzalez-Perez added the extra point for a 21-8 lead with 9:29 to go in the third quarter.

St. Elizabeth was held to three plays and out on the next possession, but the Vikings’ offense got another chance when Laurel fumbled the ball on the punt return. Benson was held to no gain by Weaver on second and three from the 30 before Smick completed a six-yard pass to Michael Downes for the first down.

Benson was held to a two-yard gain by Evan Collins on the next play and Laurel’s Tate Walls dropped him for a loss to set up third and nine. On fourth and nine from the 23, Smick found Downes, but he was pushed out of bounds before getting a first down.

Laurel moved the ball to the Vikings’ 38 on runs by White as the third quarter came to a close. Shockley was stopped short of a first down on fourth and two early in the fourth quarter, giving the Vikings the ball at their own 29.

Benson had two runs for nine yards and Smick completed three passes for 28 yards to set up fourth and one from the Laurel 21. The Bulldogs’ Xavier Limehouse made a big play, recovering a fumble to give the ball back to the offense.

Laurel made the Vikings pay for the turnover as they put together a 73-yard scoring drive and ate up some time doing so. A 20-yard run by Wilson and a penalty on St. Elizabeth moved the ball to the Vikings’ 39. Shockley added a 17-yard run on third and four from the 33. Facing fourth and one and a half from the seven and a half following another St. Elizabeth penalty (half the distance to the goal line), Laurel found the end zone on a run by Wilson. Gonzalez-Perez added the PAT for a 28-8 lead with 3:02 left in the game.

St. Elizabeth did not go down without a fight as they started with the ball at the Laurel 41 following the kickoff return. Smick completed a 37-yard touchdown pass to Caracter, but Cannon intercepted the pass on the two-point try to keep the score at 28-14 (2:10).

The Vikings’ onsides kick went out of bounds and Laurel took possession of the ball at its own 44. White’s 14-yard run on third and eight from the 46 with 1:59 left and no timeouts remaining for St. Elizabeth sealed the win and the championship for the Bulldogs.

“It really didn’t hit me until those final seconds and we were on top,” junior Brayden Hearn said of winning the title. “It (defense) was killer today. We (offensive line) finally clicked and we all played as one unit and that’s what you have to do if you want to be successful.”

“They (offensive line) found a way to make us fly,” Jones added.