The first recommendation is to hire a district safety and security lead who would supervise the school district. The ideal candidate may be a retired police officer with experience. The District Safety Officer would conduct trainings and work with law enforcement as well as principals and the athletic director. The office would be located at the high school, however, the officer would move around the district. 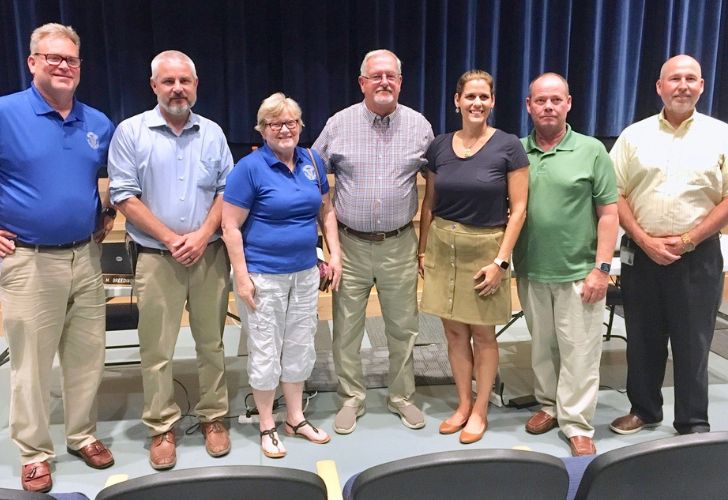 Woodbridge School Board members Steve McCarron, Elaine Gallant, Julleanna Seely, and Jeffrey Allen along with Superintendent Health Chasanov and Assistant Superintendent Derek Prillaman presented to Paul Breeding (center) with an engraved crystal as he retires after 17 years of service on the school board. Photo by Lynn Schofer

The second recommendation is to double the number of security officers with two people in each building and one security personnel on the cameras.

Finally, Chasanov recommended the district enter the state constable program.  Chasanov said, “Unfortunately based on some actions in our country we must have a conversation on how to keep our kids safe. It is time to take the next step.”

A constable is professionally licensed with the power to detain and carry a firearm. In cases of arrest, the constable will contact the school resource officer or local law enforcement. Many constables have prior law enforcement experience. Chasanov told the board that there are currently 315 licensed constables in the state.

Board President Paul Breeding requested that the district safety and security lead, if approved, analyze the playground at WECEC. “It is on Route 13 and is not safe and needs to be moved back,” Breeding said.

The board unanimously approved the plan presented by Chasanov.

Earlier in the meeting, the board presented Breeding, who is retiring, with a crystal award. Breeding said his 17 years on the board have been a labor of love.

“The people I have worked with the past 17 years do a great job. You support us and I interact with many in the district office and I want to say thank you to everyone. To every employee in the WSD, I could not have done this without your support. Thank you.”

Board Vice President Steve McCarron made the presentation on behalf of the school board and said, “In recognition of your selfless and unwavering service to the WSD and students. You have made it your full time job to be a steward of this district.”

McCarron said of Breeding, who has served as board president the last 16 years, “Woodbridge has become the district it is today because of you. Thank you for setting an outstanding example for us to follow and be true leaders.”

Breeding will continue to serve the district as a member of the Citizens Budget Oversight Committee.

Chasanov presented the budgetary report, reporting the tax collections at 104 percent. The district will receive senior property taxes in June. Of the several items presented, the utilities are within budget and back to normal since opening after COVID. Chasanov told the board his recommendation for FY23 will be to carry over some of the building budget to set aside accounts.

Dr. Kevin Long presented to the board the bus contracts for current routes for the high school and Early Education Center. The  awarding of contracts is to existing contractors who met all requirements. A lottery system was used with route 21 awarded Kim and John Moss and route 23 to Ken Miller.

A second reading was presented with no reported public feedback on Acts of Misconduct policy updates.

The board also reviewed the WEA/WSD negotiated agreement which was signed by President Paul Breeding and WEA members Karen Lofland and Sarah Ramsey. Highlighted changes in the contract include two additional days for special education teachers to perform IEP work. The district will also increase the number of translators in buildings. Finally, over the next four years of the contract increases will be three percent for each of the next two years and 2.5 percent in year three and four of the contract.  Chasanov pointed out that the referendum is a help with the salary increases. He also said that teachers went two years without raises.

“They deserve it for what they had to go through the last two years,” he said. The increases will be inclusive for all district employees.

Staff recognition took place at the end of the year luncheon. Those recognized include Sarah Burris of Phillis Wheatley as District Teacher of The Year, Ricky Truitt of WHS is Educational Support of the Year, Dawn Ellis as District Behavioral Health Person of the Year, and Dr. Donna Hall, who is retiring, is Delaware Curriculum Director of Year.

The next school board meeting will be held on July 6.