Bella Moore’s short blond curls are full of rainbow colors after a weekend visit to the hair salon with her dad, Ronnie Moore II, who also dyed his beard blue at her request. It was a special occasion after the completion of a week of radiation for seven-year-old Bella at Christiana Care Hospital in Newark.

Bella is a first grader at Woodbridge Early Childhood Education Center (WECEC) in Greenwood. For the past year she has been battling brain cancer. In September, her family found out that the cancer had returned 11 months after going into remission from her first battle, according to Woodbridge school board member Jeffrey Allen.

On Monday, Jan. 6, Bella had an MRI at Nemours Alfred I. duPont Hospital in Wilmington where they discovered her tumors were growing in size and number.

“The location and growth explained why Bella had been experiencing pain and immobility,” Allen said. “Radiation was determined to be the best treatment for temporary relief.” 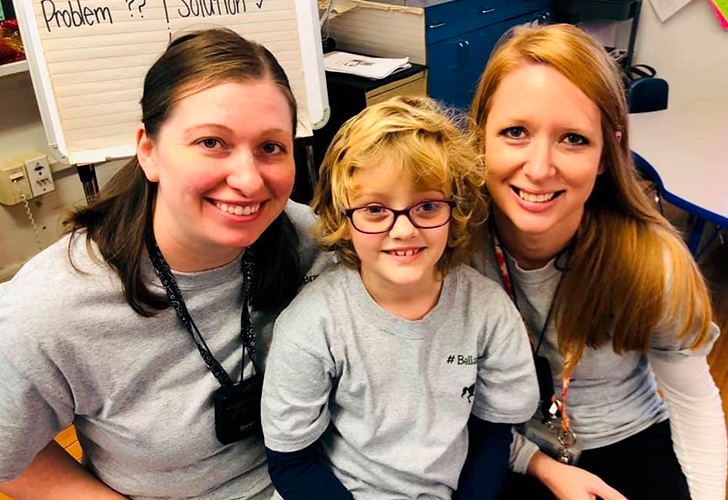 Bella Moore is a seven-year-old first grader at Woodbridge Early Childhood Education Center who is battling cancer. She is pictured here with her teachers, Natallie Visger and Sarah Ramey.

That same day, the regional manager of Dollar General called for a day in support of Bella; her mother Nikole Moore works at the Ellendale store. Employees from DG stores all over the eastern half of the country shared photos with posters in support of Bella and her family on social media.

In response to the difficult news this past fall of her cancer’s return, the #BELLABRAVE Fund was established by Jeff Allen, teachers, and community members in support of the Moore family and managing Bella’s care. In addition to Bella, the Moore’s also have a three-year-old daughter, Payge.

Over the past few months, there has been a tremendous outpouring of community support through multiple events and fundraisers.

One of the biggest events was Bella’s Ball on Nov. 9, at WECEC. The special evening was for Bella, Payge and all local elementary school families. WECEC teachers Erin Ricker and Alexis Wilson started talking about the idea and many teachers quickly joined in the preparations.

“The awesome part was so many others came up to us in the next few days saying the same idea had been laid on their hearts too!” Ricker said. “In a moment the Ball was created, and we were on a roll.”

The event brought out 260 students and parents getting dressed up and enjoying royal treatment at the beautifully decorated WECEC auditorium.

“It was truly a magical experience fit for a princess – from the preparation for the ball, Tamburelli’s providing an enchanted dinner [for the Moore family], Bella’s carriage ride through town, and an evening full of dancing and fun with a special appearance by the Disney princesses from the Pursuit for Peace organization,” said Sarah Ramey, Bella’s first grade teacher. “This event turned out better than anyone could have expected, and we believe everyone who attended felt the magic that was created.”

With a generous donation from the community and teachers, the entire event only cost $48 and raised about $3,000 for the #BELLABRAVE Fund, Allen said.

It was just one of many examples of support for Bella and the Moore family. Other events and fundraisers over the past few months include:

Additional supporters include Jim Weller donating two interview segments on his shows to promote #BELLABRAVE events, Audra Williams donating her commissions from her small business for a month, Kay Passwaters making a special dress and too many more to mention.

“Bella has never let her medical condition define her. Bella’s determination and perseverance through adversity is something to be admired! She is truly an inspiration to us and reminds us every day why we decided to become teachers,” said her teachers Sarah Ramey and Natallie Visger.