For the first time, the resource officer for the Seaford School District is a member of the city’s police force.

Until this school year, the Delaware State Police have provided a person to serve as resource officer for the district. Cpl. Tyler Justice with the Seaford Police Department started in the position last summer. In a recent report before the city council, he said that the biggest advantage that he has over regular police officers is time. 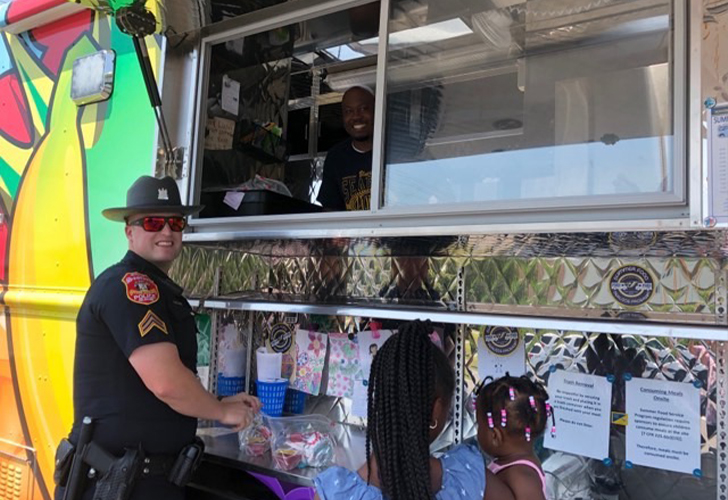 “My performance is not tied to how many tickets I write, or how many arrests I make,” he told councilmen. “If it takes over an hour and a half to talk with a student, that’s productive time.”

Justice said that he serves in three roles in the district’s six schools: law enforcement officer, educator and counselor/mentor.

As a law enforcement officer, his responsibilities include sitting in on meetings between administrators and parents who are angry, “to ensure that everything remains focused,” making sure that the schools maintain safe learning environments, responding to critical incidents in the schools, and investigating any criminal activity that involves students. Those criminal activities run the gamut from fist fights in school to physical and emotional abuse that takes place outside of school, he said. When a student is involved in an incident outside of school, Justice works with other officers who are investigating the situation.

As an educator, he instructs students as well as school staff in matters involving law enforcement. He also teaches conflict resolution.

As a counselor, Justice provide mediation between students who are feuding. “I also just listen to students, give advice and serve as a role model,” he said. “We talk about life, or any problems they may be having.”

Justice is based in Seaford High School. There, he has started the Word of the Week program, through which students can win prizes by identifying a word that Justice has posted. “I pick out SAT words, and the first student who can give me a definition and use the word in a sentence gets a coupon for some small food item from an area fast-food restaurant,” he said. “That’s a little ‘in’ into building relationships with the kids who need it most.”

Since July, Justice has been getting to know the students in the district. In the summer, he traveled with the district’s food truck and met the kids who visited the truck to get meals. He also participated in the Blue Jay Summer Mystery Camp, a program that the district put on with the help of the Western Sussex Boys and Girls Club and the Seaford District Library. Children put together clues to figure out the whereabouts of the Seaford Blue Jay, which was missing.

He participated in a bookbag give-away at Nutter Park and attended the AFRAM Festival, the grand opening of the Chick-fil-A restaurant, Seaford Night Out and the Touch-A-Truck event at West Seaford Elementary School. In October, he handed out bike helmets and locks, donated by AAA, to students in the middle school. And in November, he directed an active shooter drill at Frederick Douglass Elementary.

He records himself reading books, recordings that teachers can play to students over classroom Smart Boards. And he accompanied a high school business class on a trip to the Centre Ice Rink in Harrington, home of the professional ice hockey team the Delaware Thunder, where students learned about the kind of jobs that such a facility generates.

Justice also participates in Take Care Delaware, a state program launched last summer through which the district is notified of students who have suffered traumatic events outside of school. The district isn’t told what the events are, only that the student may need more attention than usual.

“That starts the process of discreetly making sure that extra resources are provided to make sure that the student has the best possible response to whatever happened,” Justice said.

At the conclusion of Justice’s presentation, Mayor David Genshaw said that he is happy that the district’s resource officer is a member of the Seaford Police Department. “We knew that it would make a difference,” he said.