A Pakistani attorney who fled that country after numerous death threats and attempts on his and his family’s lives, is continuing his mission to provide help for those being persecuted for their religious beliefs around the world.

Parvez Choudhry, who with his wife, Neelam, and their children, fled Pakistan and eventually located to Seaford, where friends hired him to work at a beach-area motel. A very successful and celebrated attorney in his native Lahore, Choudhry today works as a general laborer at Mountaire Farms chicken plant in Millsboro. His wife, a Pakistani school teacher, has recently been hired to work in childcare at Little Sprouts Learning Academy in Seaford. 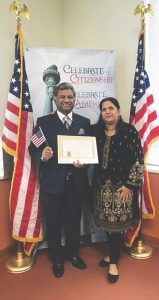 Parvez Choudhry and his wife Neelam, after naturalization ceremonies that resulted in Parvez becoming a U.S. citizen in February 2019.

While Choudhry still holds hope that he may someday secure a path for applying his knowledge and experience as a Pakistani lawyer here in the United States, he remains appreciative that he and his wife have found jobs. When not at his job, Choudhry spends his time devoted to helping those people around the world who face similar challenges that he and his family faced when escaping religious persecution in Pakistan.

When attempting to understand the depth of tragedy that has befallen the Choudhry family due to his legal work representing those persecuted because of their Christian faith, it is necessary to venture back to 1999 when Choudhry and his law practice began pro bono defense representation for those accused of “blasphemy” by the Pakistan courts which are dominated largely by Muslim mullah extremists.

According to information from the World Observatory and Defense Rights (WODR), an organization advocating support and independence for attorneys representing clients being persecuted, explains that Christians comprise less than three percent of Pakistan’s over 162 million largely Muslim people. Lawyers like Choudhry, defending people accused of blasphemy in Pakistan face an increase of threats against their lives. “Death threats and physical assault have become a regular occurrence for some lawyers, despite the widespread misuse of the blasphemy laws. Those accused of blasphemy also face similar threats,” the group says.

WODR has urged the Pakistani government to ensure protection of lawyers defending people accused of blasphemy in the country. It has also called for measures to ensure that the blasphemy accused are treated as innocent until proven guilty.

“The blasphemy laws of Pakistan, while purporting to protect Islam and the religious sensitivities of the Muslim majority, are vaguely formulated and arbitrarily enforced by the police and judiciary in a way which amounts to harassment and persecution of religious minorities,” according to WODR. “Many of those accused or suspected of blasphemy have been assaulted or tortured. People detained on blasphemy charges in prisons have been killed by fellow detainees or prison wardens. Others suspected of blasphemy, but not under arrest, have been unlawfully killed without police taking any action to protect them.”

Prior to escaping from Pakistan, Choudhry was the former chairman of the Lahore-based legal group, LADS (Legal Aid for Destitute and Settlement), which provides legal assistance to impoverished detainees and works against discriminatory laws in Pakistan. He was also a member of the High Court Bar Association and the Lahore Bar Association in Pakistan. Choudhry is also former president of the Christian Lawyers Association Pakistan.

Choudhry’s highly publicized legal defense cases representing both Muslims and non-Muslims charged with “blasphemy” began to be met with physical violence, including assaults outside of courtrooms, assassination attempts, kidnapping attempts, as well as ongoing verbal threats against him and his family.

The death threats escalated, and in 2010, after completing a high-profile blasphemy case, Pakistani mullahs declared that Choudhry and his family were guilty of blasphemy and should be put to death. The following year, Sulemam Dasseer, the governor of Punjab, was assassinated in Islamabad by his security guard for suggesting that the blasphemy law was targeting religious minorities and should be changed. One month later, Shahbaz Bhatti, Pakistan’s religious minorities minister who also spoke out against the blasphemy laws, was shot and killed in Islamabad. Choudhry was urged to seek refuge outside of Pakistan or face almost certain death. With the help of the Danish government, Choudhry and his family left Pakistan for Bangkok and lived there for two years as refugees before coming to the United States in 2013.

Although unable to practice law in the United States, Choudhry recognized that his knowledge of the legal system gave him a leg up in being able to navigate the difficult journey that took him from Pakistan to his new home in Seaford; a journey which is fraught with a great deal of bureaucracy and paperwork.

With the help of friend Dave Stevenson, who started the non-profit “Save the Persecuted,” Choudhry is using his legal expertise to help those who are seeking to flee their homelands due to religious-based persecution.

Stevenson is director of the Center for Energy Competitiveness for the Caesar Rodney Institute. The Institute is a nonprofit Delaware-based think tank that researches economic issues such as jobs, education, energy, and healthcare. It is an affiliate of the State Policy Network of conservative and libertarian think tanks. He also joined The Heartland Institute’s Board of Policy Advisors in 2017.

Stevenson said he had been asked to help support the Pakistani Christians who were fleeing from religious persecution. “When you receive a calling from the Lord to take on a task he provides a path forward,” he said. It was while attending a Family Policy Council event that Stevenson met Choudhry.

“When I met Parvez it was clear that he had the direct path to those in need,” Stevenson said. “As a brilliant and fearless lawyer in Pakistan he represented the persecuted until his own family was in so much danger he had to flee. That began his exhausting travel through the year-long United Nations asylum process. I founded Save the Persecuted to support his efforts to get others through to safe havens. Thanks to Parvez and his own experience and persistence, 250 people are now living with freedom to worship in countries around the world.”

Choudhry is president of “Save the Persecuted,” which is chaired by Stevenson. Choudhry is working in concert with countries including Thailand, Malaysia and Sri Lanka, to help the persecuted relocate by addressing the legal process of the Canadian Immigration Department. Choudhry said at present the Canadian immigration protocol is much less restrictive and less challenging to navigate than that of the United States.

“For the past three years I have been working with Canadian immigration to help families of asylum seekers to prepare for the immigration process,” Choudhry said. “Thank God that many families of my clients from different countries have been able to enter Canada and start a free and normal life.”

Choudhry said his daughter, Kainat, a graduate of Delmarva Christian High School, and, most recently, Regent University in Virginia, is seeking her master’s degree with a focus on immigration law. Like her father, Kainat hopes to use her legal expertise to support the efforts of “Save the Persecuted” to assist asylum seekers from around the world.

A recent high-profile incident representing growing violence against Christians being persecuted in Pakistan, demonstrates why Choudhry feels organizations like Save the Persecuted are desperately needed.

Priyantha Kumara, a longtime Sri Lankan manager of a sportswear factory in Sialkot, Pakistan, was known reportedly as a “strict administrator,” according to police. Workers complained that he forced them to stay past their shifts to meet export orders. He was also a foreigner and a Christian, while the 2,000-plus employees were mostly young Muslim men.

On the morning of Dec. 3, the workers’ discontent exploded into mob violence. Word spread across the factory that Kumara, preparing to repaint the walls for a visiting delegation, had taken down some religious posters that praised the Prophet Muhammad and tossed them in the trash — thus committing an act of blasphemy. Enraged by the rumors of Kumara’s desecration, several hundred workers chased him onto the factory roof and then dragged him into the yard, where they beat, stoned and kicked him to death, then set his corpse on fire. According to news reports, the horrific incident highlighted a dangerous streak of radicalization that is spreading among ordinary, lower-income and nonmilitant Muslims, according to observers in Pakistan.

In a 2014 newspaper interview, Choudhry expressed firm confidence that his difficult ordeal as an asylum seeker, far from his native home, would somehow have a purpose. “My heart is crying for my town’s people and I have a wish to serve them as I have been doing for the last many years. I wish to raise this issue in the USA for security of churches and Christians,” he said.

“I believe that God wants me to do something for destitute Christians of my country; what way and what time I do not know. But he will open the doors one day and will give me wisdom and knowledge as he did in Pakistan and Bangkok.”

As if by a divine, spiritual premonition, Choudhry, like his friend Dave Stevenson, is finding faith-based confirmation in his work with “Save the Persecuted.” The non-profit is enabling Choudhry to continue the work he started in Lahore, Pakistan, helping those whose only “crime” is having the courage to openly affirm their spiritual faith.

To support “Save the Persecuted,” contact Dave Stevenson at dtstevenson@aol.com or Mark Dellenger at dellinger_mark@outlook.com.