Members of the Bridgeville community converged on Monday, Oct. 17 at the Bridgeville Public Library to honor those whose Hometown Heroes banners will be displayed throughout the town from now until the Christmas decorations are erected. Karen Johnson told the audience how the hometown banners project was initially born; it was a senior project that her son began. From there it grew. On that day, 40 veterans were honored with a “Hometown Hero” banner.

Town Commission President Tom Carey spoke following the prayer. He thanked those in attendance who were veterans for their service, and stated, “It makes you proud to be from Bridgeville.” He also stated that he would love to see the whole town filled with the Hometown Heroes Banners. 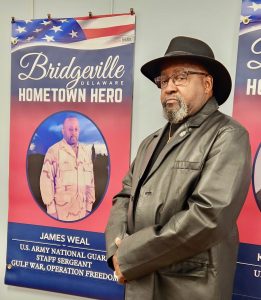 Before dismissing the crowd Johnson spoke again. Her hands motioned to the banners hanging around the room, and said to those in attendance, “This time is your time.” She encouraged the audience to take photos, interact with others in attendance, and share stories of either their time in the service, or stories of loved ones adorning the banners.

One of those in attendance posed beside his younger visage. James Weal, U.S. Army National Guard Staff Sergeant for the Gulf War and Operation Freedom, stood proudly beside his banner while family and friends snapped photos. Weal, originally from Bridgeville, now lives in East New Market, Md. with his wife. “It’s a blessing and an honor,” the Sergeant said. “I go through towns and see banners like this. I can’t begin to say what an honor and a blessing it is to be here today.”

Cody Durham of Bridgeville is the reason why his beloved grandfather’s banner will fly from a pole in the town. The late Amiel L. Durham, Sr. served in the United States Army. “Because he passed away, it was hard to find out the information we needed. It feels really good to see him on this banner,” Durham said.

After serving his time in the army, the elder Durham became a truck driver. “All of his sons and grandsons are truck drivers,” said his granddaughter Catherine Durham Hancock, who brought along her child, Isabella. Regarding her grandfather she said, “He’s always been a hero in my eyes. My dad is a strong man, and so was my grandfather. All of the Durham men are stubborn; that’s how my brother got the information. He didn’t give up.”

Following the ceremony, Johnson reflected upon the events leading up to that day. “It’s been an eventful couple of weeks with Apple Scrapple. It’s been a long year, but it’s been such an honor to continue this program, and give families an opportunity to honor their family members.”

The Hometown Heroes Banners will fly until the Christmas decorations are put up on display throughout the town. Following the holidays, the banners will go back up closer to spring.