Construction of apartment buildings given final OK by city of Seaford

Riverplace 3 and Riverplace 4 will be nearly identical to Riverplace 1 and 2, already completed on Water Street. Each building will have 36 units and will have parking underneath the buildings, on the ground floor.

Developer David Perlmutter told the councilmen that Riverplace 3 will be L-shaped and will be situated on the corner of Water and South North streets. Riverplace 4 will be in a straight line up South North Street.

Construction on Riverplace 3 is expected to get underway after the first of the year and is expected to take about 11 months. Adding time to the project will be the fact that a city sewer line that cuts across the property will have to be relocated. 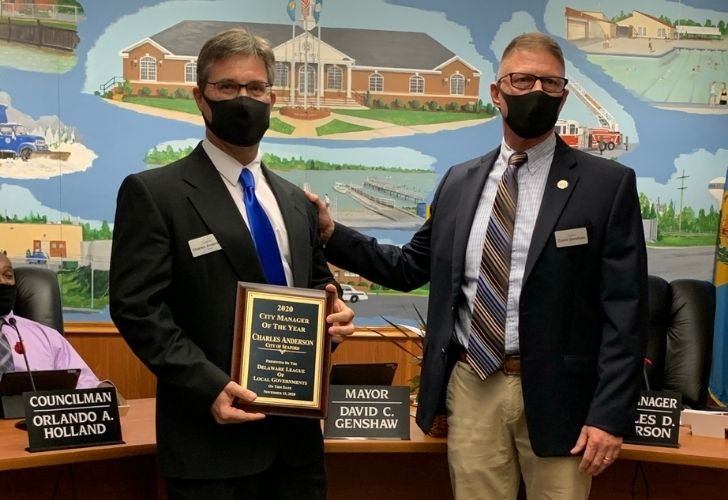 City Manager Charles Anderson was recognized by the Delaware League of Local Governments. Anderson received the City Manager of the Year Award.

Also Tuesday night, the city council agreed to a proposal from City Manager Charles Anderson and Director of Economic Development Trisha Newcomer that permit and impact fees for Riverplace 3 be reduced in exchange for the developer agreeing to demolish three run-down buildings that he owns in downtown.

Newcomer told the council that the buildings at 327 High St., 114 Market St. and 107 Spring St. have been boarded up for some time. But people still get inside, she said, and the buildings have become “areas where crime and unwanted activity tend to go.”

Perlmutter does have plans to demolish the buildings, she added. “But that will be years down the road. We feel that this is the fastest way to get that done. We have heard such an outpouring from the community, and we thought it was important to figure out a way to make this happen sooner rather than later.”

Total fees for Riverplace 3 would be $210,350. Anderson and Newcomer proposed that that number be reduced by nearly $170,000, as long as the three dilapidated buildings are torn down by April 30, 2021. If Perlmutter doesn’t meet that deadline, he will owe the full amount of fees. A certificate of occupancy would not be issued until the fees were paid, Anderson said.

The vote to approve the recommendation was unanimous. Councilman Dan Henderson voted for the proposal after receiving assurance from Anderson that the city’s department directors won’t be handcuffed by the loss of the fees.

That incremental increase continues until the tenth year, when they are paying the full amount of taxes.

In August 2015, the city council gave preliminary approval for Perlmutter’s plans for downtown construction of the Seaford Towne Center at Riverwalk, with five buildings, including a hotel and conference center, retail shopping strips, a professional building and the Galleria, with residential and office space as well as room for restaurants and shops. The plans also included a parking garage along Market Street across from Gateway Park.

That approval, which has been extended twice, will expire in August 2021. 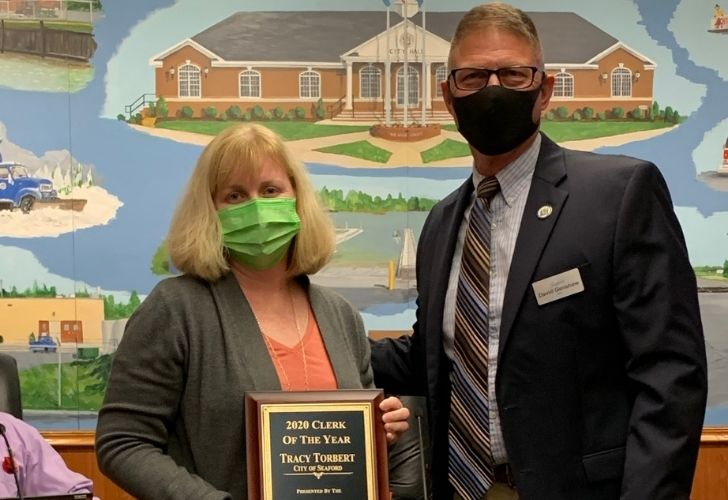 City Clerk Tracy Torbert was recognized by the Delaware League of Local Governments. Torbert received the City Clerk of the Year Award.

For the first time ever, the state’s Town Manager of the Year and Municipal Clerk of the Year are from the same town. And that town is Seaford.

Carl Luft, director of the Delaware League of Local Governments, was at the city council meeting Tuesday night to present the awards to City Manager Charles Anderson and Clerk Tracy Torbert. “This is the first time in the history of the league that both awardees have been from the same city,” Luft said.

“Seaford has had to have shown real leadership to have two awards on the state level,” said Mayor David Genshaw. “It’s incredible.”

“Do we live in a great city or what?” added state Sen. Bryant Richardson, who was on hand to present Senate tributes. “We have some of the best people in city management in the state of Delaware.”

Anderson and Torbert also received tributes from state Rep. Danny Short and Sussex County Councilman Michael Vincent. And City Attorney Daniel Griffith, who attended the meeting, had words of praise for the pair.

“I have worked for from 15 to 20 municipalities and two of the state’s three counties, and I have never seen anybody as dedicated as Charles and Tracy,” he said. “I consistently drive away from meetings with the city inspired by their dedication.”

Torbert has been employed by the city for 14 years and has served as city clerk for three years.

Anderson began working for the city in September 1986 as an inspector for the code department, and served as building official and director of operations before being promoted to assistant city manager in 2007. He took over as city manager in March 2018, replacing the retiring Dolores Slatcher.