Correspondence was first up. Bridgeville Town Manager Bethany DeBussy talked about an invitation to the “black and white dinner” to benefit the Bridgeville Fire Company on Jan. 21. She said if anyone there had not responded yet, to let her know so she could figure out how many would sit at their table. She also said the Commission received a thank you letter from the Heritage Shores Military Club for their donation. 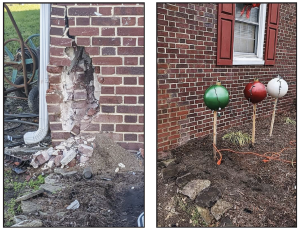 Shown are the before and after of the front corner of the Bridgeville town hall which was repaired by C. Vargas Construction.

The town is operating at a surplus for the months of November and December. The operating fund, including checking and savings, total amounts to $850,203. All accounts total $8,448,631; which is a decrease of $1,249,229 from October. That was due to the special Heritage Shores tax payment, which was dispersed.

Commission President Tom Carey noted that each commissioner got a copy of the FY23 Capital Improvements budget. He said there appears to be a lot of progress made on those items, “which is good to see,” he stated. He mentioned the salt building going up behind the town hall and said, “it looks really good.” He went to say that he hopes there will be no big snow until it’s ready.

DeBussy reported that in December the town issued 163 building permits totaling $580,462.54. One hundred and sixty-one of those building permits were issued for new construction. She noted that the majority of the permits were for the Heritage Shores Phase five, which pulled 154 of the 211 permits for townhomes and two additional permits for the clubhouse and swimming pool. “December was a busy, busy month for us,” said DeBussy.

The town received a check from the Recorder of Deeds for realty transfer taxes collected on their behalf in the amount of $103,351.20. The town has a balance of $2,348,650.62 that may be earmarked for future debt payments or capital projects.

DeBussy stated the town has large maps printed on display in town hall as well as a digital copy available on the Bridgeville website, under “info” then “elections.” Candidate filing forms are available on the website and at town hall. The deadline for candidate filing is Feb. 3; absentee ballots are available by Feb. 17. The deadline for voter registration will be Feb. 22. The town now uses the state of Delaware voter registration system.

DeBussy said that in the excitement about the parade she forgot to announce a donation for the municipal park. The town received a check in the amount of $2,777 during the tree lighting in December to use toward the purchase of park equipment from Union United Methodist Church. The money is set aside in a separate account for charitable contributions for the park, slated to be erected beside the town hall. This brings the total to about $8,000 donated for the future park.

The salt building went up in December and still needs some site work done, but it is a complete building. The doors are up, the sand is ready for any oncoming storms this winter. Because the building is on a hill, there is still work needed to be done to level it out and bring in some asphalt to bring the road up to the building.

The 10-year contract for both water towers expired in December, so an RFP went out for a new maintenance contractor. All of the documentation is on the town’s website under “Info” and “Bid/Proposal Solicitations.” Bids are open until Jan. 23.

DeBussy also thanked C. Vargas Construction LLC for repairing the front of town hall after a vehicle did damage to the corner of the building. She stated the company went above and beyond – coming back and touched up things that they felt needed to perfect. She said it looks “really great.”

Last in her report was the announcement of a new page on the town’s website: “Greenwood and Bridgeville Transportation Plan.” It’s under “Important Information and Maps.” She shared information a few months ago on Coastal Corridors Study – DelDOT is looking at traffic impacts around Route 404. It has since split into two different studies, east and west. She said the town has been meeting with Greenwood/Bridgeville area members of the study since November. They’re working on making a long-term plan regarding traffic in the area.

She stated that they’re looking for a lot of community input. She also noted it’s a multi-focus/multi-year plan. The first open public workshop will be Feb. 23 from 4 to 6 p.m. at the Woodbridge High School Cafeteria, 14712 Woodbridge Road, Greenwood. At the workshop, there will be a review of existing road conditions and there will be a time of feedback. It’ll be the first of many workshops.

In new business, a public hearing and adoption of “Heritage Shores Phase 4F and RPC Amendment” was held. It was a revision of a plan presented and approved back in July of 2022. Passwaters Farm LLC attended the Planning and Zoning meeting in October. The plan is to now convert some single-dwelling lots to duplex lots, thereby increasing the number of lots from 120 to 142 in Phase 4F. It’s located adjacent to the Heritage Shores Circle. They will be age restricted and part of the HOA at Heritage Shores. It’s part of the ongoing activities of development at Heritage Shores. Commissioner Tom Moran said he appreciated that they are maintaining the 17-90. It was approved, 5-0.

Next, the commissioners considered a 2022 EM Funds request from the Bridgeville Volunteer Fire Company. It was determined that the town would allocate $67,398.75 of grant funds to the fire company for the purchase of a new ambulance. It will be a 2022 Ford F-550 Super Duty 4×4 built by Horton Emergency Vehicles. It will replace an ambulance purchased in 1994. Commissioner Tomeski said he’s driven the ambulance and it is in serious need of replacing. It passed, 5-0.

Next up, the Commissioners approved Matt Davis to serve three more years on Planning and Zoning.

Under “good of the order,” Commissioner Moran asked about the speed monitor that is slated to be erected at Heritage Shores. Town Manager DeBussy assured him that it would be in place before the next Commissioner’s meeting. Commissioner Moran then asked if there was an update on the park committee. DeBussy said they are still waiting for a site plan to be developed so they can bid out work for construction.

The next Bridgeville Commission meeting will be Monday, Feb. 13 at 7 p.m. at the Bridgeville Public Library, located at 600 South Cannon Street.