Blades Night Out draws 400 to 500 people to enjoy entertainment, get to know town’s officers

Blades Night Out, held Aug. 2 in the park, attracted some 400 to 500 children and adults throughout the evening to mingle with neighbors, enjoy music, food and fun, and get to know the town’s police officers.

Sgt. Victor Matos has attended every Night Out since he joined the police department in 2014. National Night Out is a part of “community-oriented policing,” he said, allowing the community to see another side of police officers in a casual, “let-your-hair-down” atmosphere. It helps build positive relationships and create safer neighborhoods. 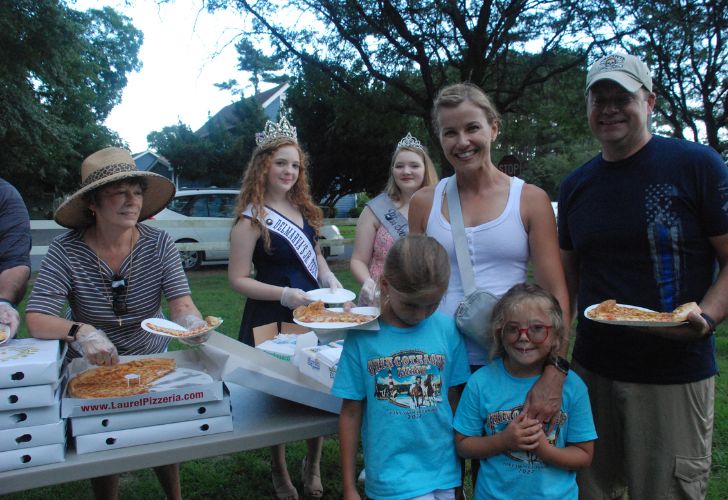 Celebrated in almost every state on the first Tuesday in August, National Night Out is a chance to bring communities together with the police officers who protect them. The first such event back in August 1984 involved 2.5 million participants in 400 communities in 23 states.

Local residents enjoyed more than 100 boxes of pizza provided by Laurel Pizzeria in Laurel and Café Milano and hot dogs served by members of the Blades Volunteer Fire Department on buns donated by Stroehmann’s. Watermelon was donated by DMC Farms in Laurel and Rita’s donated mango-flavored Italian ice. There was a bouncy slide donated by Bounce Around.

Robert Hathaway of Seaford brought his collection of vintage police cars, including a 1965 model that was in a presidential inaugural parade.

Blades resident Roxanna Lofland was there with her children, ranging in age from 4 to 24, as she has done for nine years. “It’s beautiful what they are doing for the community,” she commented, as she relaxed on a bench, enjoying a cool breeze.