Last week, TidalHealth Nanticoke staff members got a sneak peek at the daVinci surgical robot which will join the hospital’s OR team later this month. The robot will allow surgeons to perform surgeries remotely from nearby, allowing for less pain from surgeries, shorter hospital stays, and lower healthcare costs for surgeries.

“The dexterity and precision is way better than what a human surgeon can do,” Dr. Kurt Wehberg, a cardiothoracic surgeon who will be using the daVinci to perform robotic thoracic surgery at TidalHealth Nanticoke, said during Thursday’s demonstration. 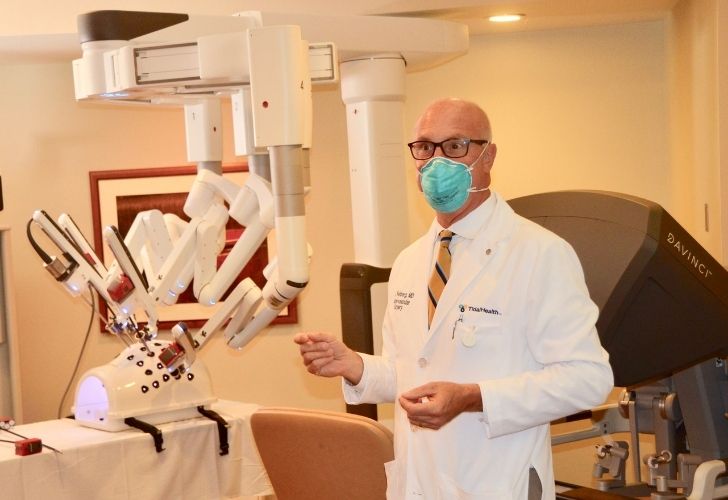 Wehberg said he likes to be set up within 25 feet of a patient during surgeries with the robot. Some countries use it to do surgeries remotely from across the world.

Wehberg demonstrated the daVinci with a quarter and a five dollar bill, moving them around with the tools attached to the robot arms. The two cameras inside the surgical area and the screen on the wall showed the coin and bill in great detail.

Dr. Wehberg has done 1,500 surgeries on patients with the robot. He had to do extensive training on it first, passing a test before working on patients. Surgeons then work to become world experts. Wehberg trains surgeons, making sure the procedures are done the right way.

“Our goal is to build a balanced state-of-the-art program that’s going to transform how patients get surgery,” said Wehberg.

The daVinci will be the most state-of-the-art robot at TidalHealth Nanticoke. It can simulate operations and will be used at the hospital for thoracic and cardiac surgeries. It can also be used for general and bariatric surgeries. Around 500 robotic orthopedic surgeries have already been done (with other machines) at TidalHealth.

Wehberg said any type of surgery can be done with this machine. His role is to expand the types of surgeries the hospital does with it.

According to Wehberg, surgeries with the robot benefit patients by allowing them to go home quicker (often in a day or less), reduce pain from surgeries and the need for pain medication, and reduces the size of incisions needed to do surgeries.

“With robotic surgeries you can pretty much eliminate narcotics,” Dr. Wehberg said, adding that 90 percent of his heart patients don’t need them.

Surgeries done by surgeons, without the robots, need incisions the size of a hand. With the robots, the ports only require eight millimeter incisions. The robotic instruments are the width of a pencil.

In addition to reducing the cost of healthcare for surgeries by half, surgeries with the robots also benefit the surgeons. Surgeons are able to sit down during the surgeries, which may extend the doctors’ careers by reducing stress on their bodies.