For the first time in nearly three decades, the town of Bridgeville will not have an Apple-Scrapple Festival this year.

The two-day festival, which attracts crowds of more than 30,000, has been cancelled due to the ongoing coronavirus pandemic.

Also cancelled is Christmas in Bridgeville, an annual holiday craft show sponsored by the historical society. The show is held in Woodbridge Middle School, as is a craft show that is part of the Apple-Scrapple Festival. At each event, the school’s gym and the cafeteria, as well as classrooms and hallways, are crowded with vendors and buyers alike. 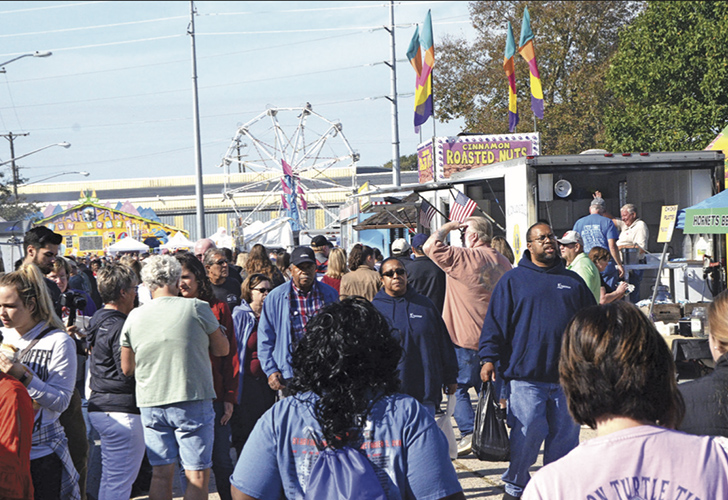 The decision to cancel Apple-Scrapple was made last Tuesday, at a meeting of the festival committee. It was a “unified decision,” said festival chairwoman Karen Johnson.

Alice Min, president of the Bridgeville Historical Society, and craft show chairmen Dawn and John Tomeski attended the festival committee meeting. “After listening to them talking about all the requirements they would have to meet, we saw that we couldn’t hold our craft show according to COVID regulations,” Min said. “We tried to figure out a way to arrange everything in such a way that there were no crowds. We just couldn’t see how we could do it and meet the regulations.”

Min said that the craft show and a fall dinner and auction, which has also been cancelled, are the historical society’s major fundraisers. Last year, the show brought in about $6,500, she said.

“We had plans, and had hoped to find a way this year to expand what we do,” she said. “It doesn’t look like that’s going to happen.”

Similarly, many non-profit groups and civic organizations rely on the Apple-Scrapple Festival for an opportunity to raise money. Every year, 10 or more student groups from the Woodbridge School District set up food booths, said superintendent Heath Chasanov. Not being able to do so this year will only make worse what he predicts will be a tough year for fund-raising.

“School clubs and non-profit groups are going to have a harder time raising funds than they have in the past due to the financial uncertainty associated with the pandemic,” he said. “The funds raised by school groups are typically to enhance our programs, so some groups will simply do without some things this year.”

Stephens said that the fire company, which also holds dinners throughout the year, has not made plans for another fundraiser. “We will closely watch our spending and operate within our means,” he said.

Despite the loss of income for their organizations, neither Chasanov nor Stephens criticized the decision to cancel the festival. “A major concern that we were ultimately facing was the safety of not only the vendors, but the influx of visitors to Bridgeville, along with our EMS staff and members,” said Stephens. He called COVID-19 a “devastating disease.”

“I certainly understand and support the decision that Karen [Johnson] and the festival committee had to make,” Chasanov said. “These decisions aren’t taken lightly and unless you’ve ever had to make a decision that weighs monetary gain versus the health and safety of your community, it’s hard to truly understand the committee’s dilemma.”

Johnson said that the festival committee had been at work for more than a month, trying to figure out ways to promote social distancing, particularly in the area of the food court and stage. “We were working hard on how to provide a safe atmosphere,” she said.

Committee members were unsure whether the carnival that always set up along Railroad Avenue would be able to attend. They also didn’t know whether as many non-profit organizations would participate as usual, because so many of the people who volunteer with them are elderly.

The final straw was a requirement by the state that all food vendors have warm running water available, in order to allow workers to wash hands. While many of the festival’s vendors have food trailers that have running water, many others do not, Johnson said. Those vendors wouldn’t be able to attend, and “without all the food vendors, the festival just wouldn’t be the same.”

Johnson said that she has heard people in the community questioning why it is that the Delaware State Fair is still planned to open July 23, and the Apple-Scrapple Festival had to be cancelled. There are two big differences between the fairgrounds in Harrington and the area in Bridgeville where Apple-Scrapple is held, she said.

Johnson said that cancelling the festival was the hardest decision the planning committee has ever faced. In the end, “it was a matter of safety for our community. Even though this is an important event, an important festival, we couldn’t let that determine our decision.”