City of Seaford lights it up blue to promote Autism Awareness

A crowd braved the chilly winds on April 1 on the corner of Spring and High Streets in downtown Seaford for the Light It Up Blue Autism Awareness lighting ceremony. However, it seemed as though hearts were warmed by the program. Following a welcome by Seaford Parks and Recreation Department Head Katie Hickey, a short presentation by Frederick Douglass Elementary School students enchanted the audience.

Following the presentation, Vice Mayor Dan Henderson informed those in attendance that back in 2014, one out of every 100 children were diagnosed with autism; however, now one in 54 people are diagnosed on the autism spectrum. He stated that we have an opportunity. He said we are in possession of “a lot of keys,” and “it’s up to us to unlock these children with incredible gifts.” 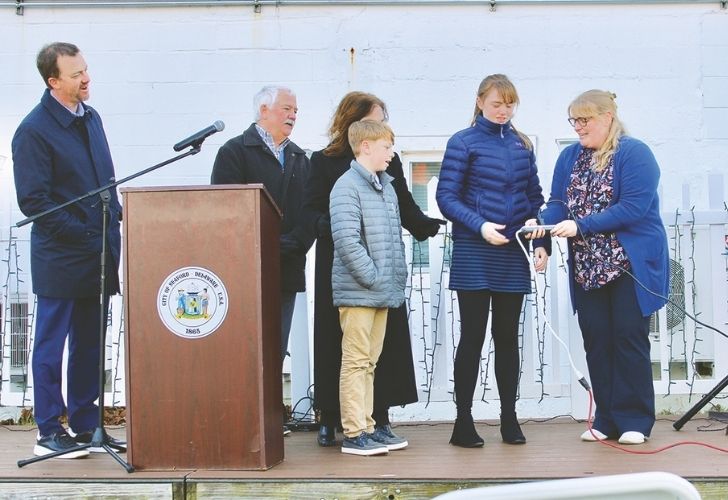 Katie Hickey and the Windley family, including Marsha and Carlyle Windley’s granddaughter, Sara, turn on the city of Seaford’s blue lights during last week’s Light It Up Blue ceremony. Photo by Rebecca Jones

Then, Henderson invited Carlyle and Marsha Windley and their family onto the small stage, where he declared through a proclamation that April is National Autism Month, calling for equal access to all. He also declared the month of April “Autism Month” in the city of Seaford. Henderson encouraged all citizens to “acknowledge this worthy cause.”

Delaware State Representative for the 39th district Danny Short took the stage next. With him, Short brought Marcus Wright, a representative for United States Senator Chris Coons onto the stage with him. Rep. Short pointed out autism awareness is a community effort. He talked about how he was planning to change the lights at the Seaford fire house to blue in support of Autism Awareness Month. Acknowledging the Windley family – champions of autism awareness in Seaford and Sussex County – he stated, “unless you have a champion of the cause, it doesn’t happen.”

Hickey talked about the efforts of the Windley family to bring awareness to the challenges that those with autism face, as well as their families. “Bringing awareness, year after year, is important,” Hickey said, before calling Carlyle Windley to the stage to present financial awards on behalf of the Lions Club. Windley presented a check for $500 to the Delaware Special Olympics, and a $1,000 check to Family Services for Autism Delaware.

Next, Dr. Mary Whitfield, director of Delaware statewide autism programs, thanked those who spoke before her, and thanked the city of Seaford for welcoming her to speak. She then stated April 15 would be National Autism Day. Dr. Whitfield said the fight for acceptance is one no one should have to fight. She said this walk is not always easy. She then touched upon the color chosen to shine a light on autism: blue. She said blue is the calmest of all colors, and then asked to share her heart.

She talked about her love of those with autism grew as a teacher herself. “We see you,” said Whitfield. “Do not grow weary. Remember the importance of your work. You are given a season. Plant, water, grow. It matters.”

Dr. Whitfield called upon those in the audience to applaud all of the parents, guardians and caretakers of those with autism. “Only you walk wearing your shoes,” she said. “You do not have a season; you have a lifetime.”

She added, “Thank you. Thank you for not giving up. Thank you for trusting us educators. We reap what we sow… great is your reward. Take time to bask in the beauty of your child.”

To the students with autism, she encouraged them. “Don’t give up. You are fearfully and wonderfully made.” She described how they have a purpose. “We, your teachers, promise to lead you to that purpose. We will fight for you. We are strategically placed in your life. You are called to show us life,” she added.

After sharing how her first autistic student taught her how to speak, comfort and reassure without words, she said to students with autism, “Today we acknowledge you, praise you, celebrate you. You will reach your goals.”

She ended her speech with the poem, “This is My Wish for You,” by Ralph Waldo Emerson.

The evening ended with Hickey calling the Windley family back onto the stage to officially light the city of Seaford blue, with the lighting of the stage. Marsha and Carlyle’s granddaughter, Sara, helped switch the lights to blue. Hickey asked those in the audience to show their support for autism, not just one day, or even a month, but all year.

For more information or to get involved, visit: www.autismspeaks.org, or www.autismdelaware.org.