20th Year of Mt. Olivet Father-Daughter Dance has better turn out than expected

The night was bitter cold, and an icy squall occurred earlier in the day, however, that didn’t stop dapper dads from accompanying their delightful daughters to the 20th Mount Olivet Father-Daughter Dance last Saturday. One of the dance organizers, Melissa Ferree, said at least 500 attended the event. “Even though the numbers this year were lower than some previous years, frankly, I thought it would be lower this year, due to COVID. I’m so pleased.”

They usually see about 700 attendees; one year, though, they actually hit 900. 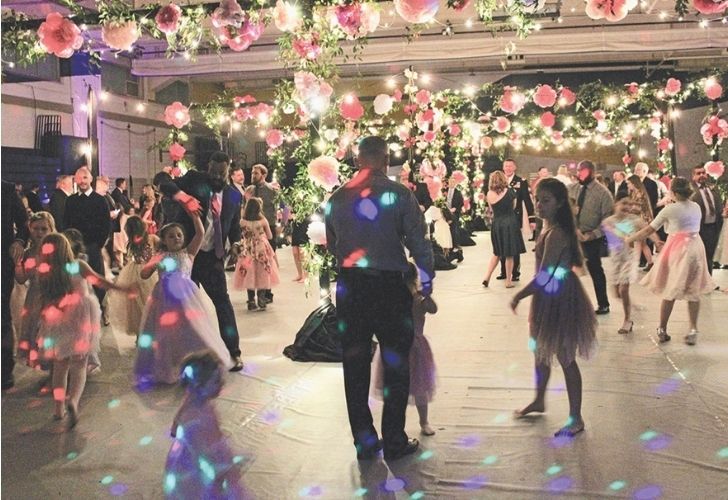 Fathers and daughters are shown on the dance floor at the 20th Mount Oliver Father-Daughter dance last weekend. Photo by Rebecca Jones

Ferree said the Father-Daughter Dance began in 2001 at Mount Olivet’s Fellowship Hall, then grew to the Seaford Firehall, before outgrowing that location to the place now home to the dance, the Seaford High School. Even though the event has grown from such small beginnings, the goal is still the same: “It’s an awesome opportunity for fathers to build relationships with their daughters,” said Ferree, director for at least five years.

She stated the best thing about the night is, “absolutely, the little girls, all dressed up, excited, looking at dads, smiling. It’s adorable. I hang out at the ticket area just to see that. If I’ve done my job right, then the night of the dance, my job is easy.” She noted that none of this would be possible without help in making sure jobs are completed by helpers, over 25-volunteers strong. This year, Mt. Olivet partnered with Hope Church to make sure things ran smoothly.

Fathers and daughters were treated to four decorated areas, each inhabited by a different photographer. Each stated that they have been taking photos of attendees for at least six to 10 years. Music beckoned fathers and their daughters past an ornate pink and white balloon archway and into the gym.

There, volunteers were treated to smiles as fathers tried to put on their best dance moves and daughters giggled with delight. Some ran full-force to their fathers, as they leapt into their daddy’s arms, held over heads, giggly squeals filling the air. Some fathers spun daughters around and around like a ballerina with a very tall partner. Among the older girls, fathers held their daughters close, as if letting them go would cause them to flit off like butterflies to their friends, leaving the men standing, watching their young ladies leaving them behind in the dimly lit room. And that did happen with some fathers. Those dads would find another father, and they would chat.

If you asked the girls, from the youngest to the oldest, what their favorite part of the night was, the resounding answer was, “Dancing with my dad!” Fathers tended to say that they were happy just to have a nice time with their daughters. One, Gus Baker, came from Salisbury to attend the dance.

“Along the way, I want to show my daughter Hallie how to be treated like a lady. I want to be the example,” he said

Another man from Salisbury, Edgar Burnsed, said that last year, he and his daughter Shekinah “still had our own father/daughter dance at home.” When COVID shut everything down last year, he realized how much he missed it. “There’s not enough family-friendly stuff out there. I’m so glad for this. It’s a good time to spend with my daughter.”

Providing perfect mixes of fast moving songs with gentle ballads was the man who has provided musical entertainment for the event every year for the past 20 years, DJ Brian K. Baull. “I think this is an amazing event. I’m honored every year to be asked. It’s cool to see the fathers out there with their daughters. And now, I see a new generation of little girls coming up. I’ve actually d.j.’d one of the girls’ weddings who first came here.”

In the cafeteria, the space was also decorated with balloons, and attendees could enjoy snacks and liquid refreshment. When asked if they planned to do anything like a mother/son dance or other such event, Melissa Ferree answered, “We’d be happy if someone would take that up, we’d be all for it. Unfortunately, there’s just not enough hours in the day to do both.”

She noted it takes six months of planning to pull off an event of this magnitude. When the thought hit her that an hour of sleep would be lost due to Daylight Savings Time, Ferree said, “We’ll be losing an hour’s worth of sleep. We’re all going to be a little tired tomorrow morning at church – but it’s going to all be worth it.”