Woodbridge’s Hayes competes, excels in three sports in one season

The day of Nov. 12 summed up Woodbridge senior Ian Hayes’ athletic career. Hayes, who has competed in cross country, soccer, and football (all during the fall season) for the past three years, had a state cross country meet and a state soccer game that day.

Hayes and teammate Luke Chisenhall both had to make it to Indian River High School following the cross country meet. 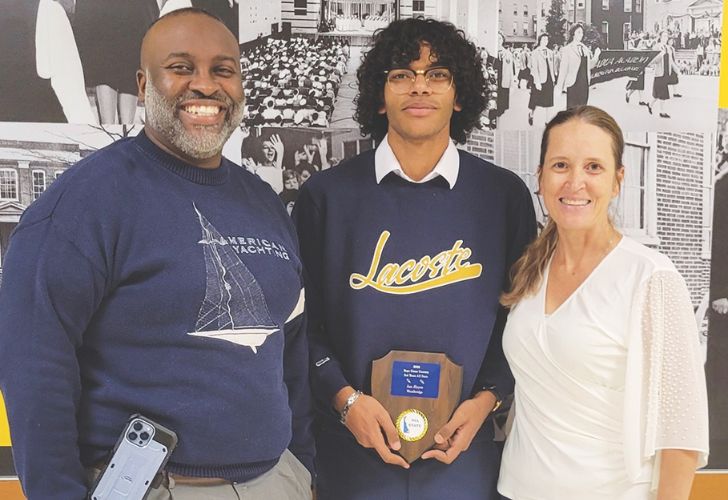 “Our goal was to run as fast as we could and get down there,” said Hayes, who said he started out slow. “I started to run as fast as I could. I was shocked when I found out what place I was in. It was like a big push. If I didn’t finish fast enough I may not have had enough time to rest.”

Hayes placed fourth in the state among Division II runners and has since been named third team all-state in cross country. He was also named all-state in soccer and was an all-district selection as a kicker in football.

Competing in three sports in one season along with balancing a social life and academics was a challenge.

“You get home from one game and you have another the next day,” Hayes said. He added that he experienced constant fatigue at the time.

Ian’s brother, Xavier, played all three sports during his senior year. Hayes’ father, Eugene, the varsity boys’ soccer coach at Woodbridge, wanted Ian to continue the tradition his brother started. He did so during his sophomore, junior, and senior seasons.

Hayes recently attended the state cross country banquet. Despite his strong finish in the state meet, he was surprised to be selected third team all-state.

“That was amazing. I didn’t expect it,” said Hayes. “It came as a shock at first.”

Ian started running cross country as a sophomore. He didn’t like the sport at first.

“I ended up being good at it and I continued running. I really enjoy running. I run for fun now,” he said.

Hayes competes in benefit runs such as the Rehoboth Cancer Run.

According to Woodbridge Cross Country Coach Harry Brake, Ian gave advice on topics such as breathing, pace, and stride to other runners when they ran together.

“He never had to say a word. They just needed to see his habits,” Brake said.

Ian and the soccer team won their first state tournament game and advance to the quarterfinals.

“It was exciting to be able to play one last game,” said Hayes. “I think the team next year will be as good, if not better, as we were. They just have to work hard.”

During the fall season Hayes practiced with the soccer team and would practice with the football team one or two days, if he had time. He ran at home to prepare for cross country meets.

Hayes also warmed up for an hour before football games. He never knew how many times we would get a chance to come in and kick.

“If you mess up, that might be the one kick you get,” he said.

Hayes plans to attend Heidelberg University in Tiffin, Ohio where he will play soccer. He picked the school because it offered the most scholarship money, has good academics, offers an opportunity to play stress free soccer, and will allow him to transfer his credits from his associates degree.

Hayes is thankful for the support of his coaches, teammates, and family. “All of them really pushed me. It was like having everybody back you up. They’re always there or you. They have your best interest in mind,” Hayes said.

As for his legacy at Woodbridge, Brake says Hayes is an example of what student-athletes can accomplish.

“He left a really good example behind for all the athletes. I think all of our kids are capable of it,” said Brake.