This was the first time that the Boys and Girls Club, which hosted the event, has helped with the celebration. Melinda Brittingham, project director for the club’s 21st Century Community Learning Center, said that organizers hoped to “bring together families from all different backgrounds, to come together to celebrate Dr. Martin Luther King and the dream that he had.” 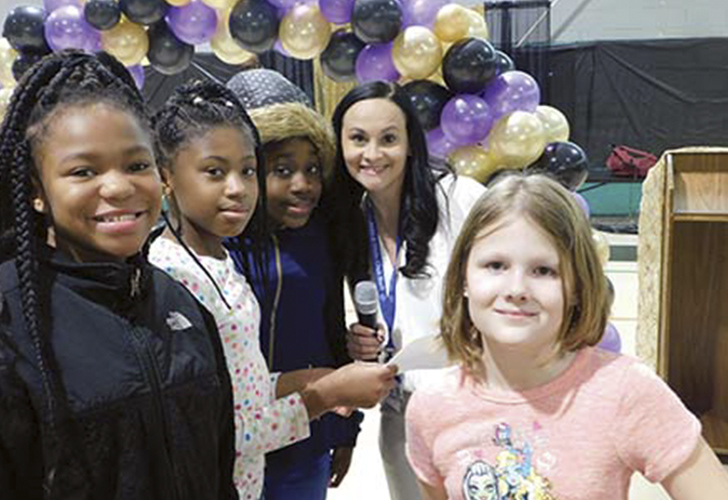 The day started out with a prayer breakfast, with music by Big Papa & God’s Chosen Ones and the choir from Mt. Calvary AME Church, Concord. More than 200 people attended the breakfast, Jones said.

Dr. Julius Mullen, chief clinical officer for Children & Families First of Delaware, and his wife, Natasha Mullen, a certified counselor and owner and director of Milestones Consultants, were the guest speakers. The 2020 MLK Community Recognition Award was presented to Furman and Joyce Sessoms, founders of the ARK Educational Resource Center, an after-school tutoring center in Laurel.

A March for Peace took place at noon. Because of the wintry cold, the march was held inside, in the Boys and Girls Club gym. About a dozen children walked around the room to the rhythms of drummers Anthony Taylor and his 6-year-old daughter, Kiera. The Taylors are members of the Daanda Lenol (“the voice of the community”) drum and dance troupe. The group, which originated on the Delaware State University campus, is trying to establish a drumming group in Sussex County, Taylor said.

At 1 p.m., participants at the event sang the Stevie Wonder song, “Happy Birthday,” which Wonder wrote in 1981 to promote the establishment of the national Martin Luther King Day holiday. Activities throughout the afternoon included crafts, face painting, storytelling and dancing.

Jones said that it was rewarding to see so many people at the event, especially at the breakfast. “Our community is striving to come together and stay together, and that inspires me to keep going,” she said.

She said that she was pleased that people from the white community were at the breakfast. Seaford Councilman James King gave the opening prayer, the Rev. Rick Betts from Crossroads Community Church, Bridgeville, also offered a prayer, and Seaford Mayor David Genshaw spoke.

But she acknowledged that most of the people at the breakfast were African-American.

“We would love to see a more diverse attendance at this event,” Jones said. “We hope that it will grow into the melting pot that we so desire.”