Last Wednesday night, four Western Sussex Chamber of Commerce members were recognized for their work and their service to the community during the annual holiday social awards banquet. This year’s banquet took place at the Laurel American Legion.

Chamber members brought donations of canned goods, pet food, and children’s books to be donated to the Bridgeville SPCA, ARK, and the Good Samaritan Club. 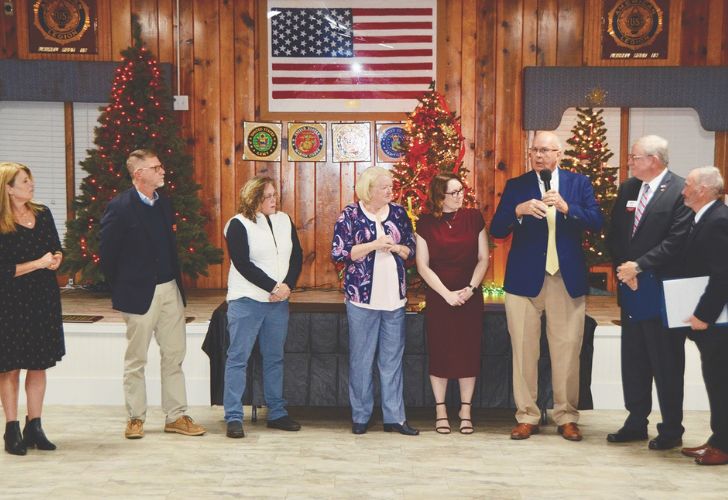 Melinda Tingle of Edward Jones was the first award recipient. She was presented with the Community Leader of the Year award.

Tingle served various roles with the former Laurel Chamber of Commerce for 23 years. She has also served on the Laurel Redevelopment Board and is President of Good Samaritan Club

“If you’re not volunteering your time you are missing a huge opportunity to help your community. The reward is just insurmountable,” said Tingle.

Dr. Shekina Mast of Mast Audiology received the Blazing New Trails Award. Mast, a Dover native, moved to Seaford in 2017. She is the owner and sole audiologist at the business.

Mast thanked her husband and family for their support over the past 10 months of business ownership.

“It’s been quite a crazy, overwhelming ride,” she said. “Thank you to my family and thank you to God.”

Jack Riddle of Community Bank received the chamber’s Businessperson of the Year award.

“Whatever the issue is, Jack will be there and he’ll help you,” Western Sussex Chamber of Commerce Executive Director Terry Carson said of Riddle.

Riddle has been the President and Chief Lending Officer since the bank’s formation in 2006. He is a Rotary Club member and served as a Nanticoke Health Services board member for 25 years and treasurer for 15 years.

“I love this place,” said Riddle, a Seaford native. “That’s what makes Sussex County special, it’s all about relationships.”

The Legacy Award went to Don Dykes, who served as the Executive Director of the Laurel Chamber of Commerce on two different occasions.

He has owned a window business, worked in banking, and was a property manager and a realtor. Dykes has also served on many boards including Good Samaritan and the Laurel Senior Center.

“The biggest thing is the people that helped you along the way,” said Dykes. “It (community) gets in your blood.”

“It’s been a long journey, but a good journey. I’ve loved every minute,” he added.

Dykes follows in the footsteps of John and Linda Hollis and Pat Correll as a recipient of the legacy award.