The Sussex Tech boys’ swim team improved to a .500 record while the Ravens’ girls’ swim team remained undefeated with wins over the Seaford swim teams last Tuesday in Seaford.

The Sussex Tech boys opened the meet by placing first and second in the 200 medley relay. The team of Ndango Dinga, Connor Seeley, Dillon Laux, and Thomas Warren touched with a 2:02.45 for the first eight points while teammates Brady Nicol, Jacob Luciano, Nicholas Luciano, and Derek Jones finished second with a time of 2:20.27. 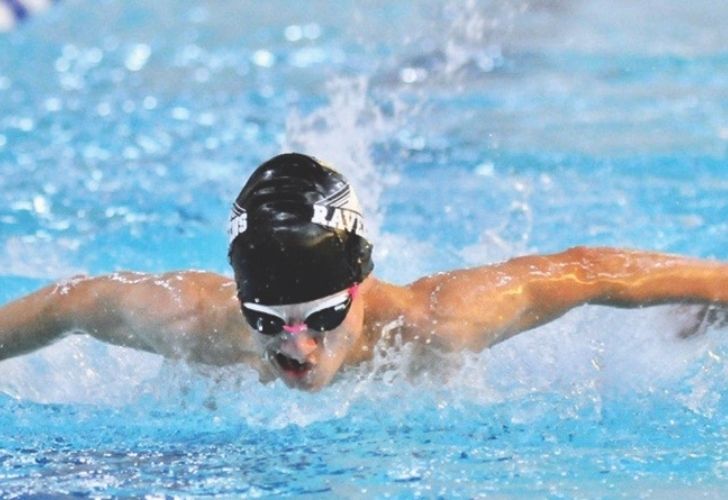 Sussex Tech’s Dillon Laux finished first with a time of 2:24.87 in the individual Medley last week against Seaford. Photo by Lynn Schofer

In the 200 meter freestyle Dinga was first with a time of 2:03.75, followed by Aiden Ruscavage in second place and Azael Martinez in third for 13 points for the Ravens. Seaford’s Sam Dorvilier finished in fourth place. In the individual medley, Seaford forfeited with empty lanes and Laux and Seeley swam the event for the 10 points. The Ravens took all top three finishes in the 50 meter freestyle beginning with Nick Luchiano (26.87), Nicol (30.83), and Jones (32.07).

Laux swan a 1:07.04 in the 100 butterfly for a first place finish followed by Warren and Seaford’s Aidan Elliot in third place. The Ravens collected their seventh first place finish in the 100 freestyle event with Chase Handy’s time of 1:02.39. In the 500 meter freestyle, Warren swam 6:35.44 for the six points and then in the 200 meter freestyle relay the Ravens’ Robert LoRusso, Handy, Ruscavage, and Seeley touched first with a time of 1:54.12.

The Ravens’ girl swimmers collected 133 points with 10 first place finishes in the meet. In the 200 medley relay, the team of Brynn Thornton, Neh Dinga, Molly Dopler, and Mackenzie Whaley swam a 2:08.48. In the 200 meter freestyle Zoe Tyndall touched at 2:30.71 and Seaford’s Haidy Garcia finished in second place with a 2:52.98.

In the 200 individual medley the Ravens filled all three lanes for the 13 points while Seaford did not field a swimmer. In the 50 meter freestyle the fastest time of 28.43 was by Sussex Tech’s Cassidy Thomas and Seaford’s Aleks Anderson touched at 28.90 for second place. In the 100 meter butterfly Seaford did not put anyone in the lanes to three swimmers for Tech and Dopler finished with the fastest time of 1:11.60.

In the 100 meter freestyle Sussex Tech’s McKinley Stokley’s 1:01.54 was for first place and teammate Stella Pogwist finished second with 1:03.18. In the 500 meter freestyle Thornton’s time of 5:56.91 was almost a full minute ahead of the second place finish. The relay team of Whaley, Stokley, Tyndall, and Thomas finished first at 2:00.50.