If you wanted someone to help increase your company’s social media presence, where would you go? Santosh Viswanathan, president and CEO of Lakeshore Chrysler Dodge Jeep RAM in Seaford, turned to Seaford High School. With permission from the school, he spoke to a social media class taught by Luke Siler about an internship opportunity for the summer.

“The students were lukewarm at first, then they got interested,” Viswanathan said. “I only needed one or two, but the students said they do better working as a team.” 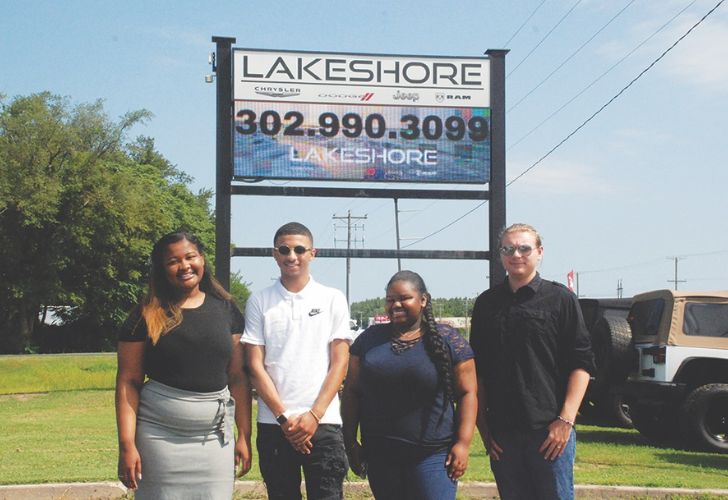 He couldn’t hire the whole class; he started with five students, all rising seniors. One later accepted a full-time job elsewhere.

Viswanathan set up a work space for the interns and left the details up to them. “They came up with a plan, what times they would meet, what messages would go on what platforms. They gauge the effectiveness of the messaging and change it to yield better results. It was totally not me, totally them. I let them loose to do what they wanted.”

Three months into the project, Viswanathan said there has been real growth in social media messaging. “They have a following. They created their own audience,” he said.

When he saw how successful the interns were, he approached a school near his dealership in Smyrna. His interns recruited other students there on social media, all in one day, and then trained them.

Santosh wanted a single intern to be liaison for the group. Taylor Jenkins took the lead. She offered statistics on the effort’s effectiveness: “The number of people reached through Facebook is more than 150,000. In one week, we reached 32,400. In a 90-day period we reached 23,100 on Instagram. For TikTok, the algorithm was crazy — 45,000 to 50,000 at least.”

Cameron Parker explained, “TikTok is like dancing, catchy songs. It’s less about posting than trends. The hardest thing in this job is to keep up with trends and relate them to cars, but we figure it out each time.”

Adriana Cain said, “This is my first real job. It has been really great, and provides experience on a path to our careers.” She plans to go into media marketing and design.

Adriana said her generation started really young with computers and social media, by third or fourth grade at least. She and the other interns have been in Siler’s digital communication and technology class together for three years.

Blake Dasher added they and their instructor, an English teacher, had been “thrown in together” into a new class and learned together.

Taylor added, “He made sure we had a grasp on (the subject matter), then upped it so we learned more.” When COVID closed down in-person classes, the students were given Chromebooks to use and access to software, including Adobe Cloud year round.

At the Lakeshore office, and at home — since their work doesn’t require them to be in an office at all — the interns use their laptops or their own phones. The apps they use include Capcut, iMovie and After Effects, the industry-standard motion graphics and visual effects software.

Taylor said the group has gained a lot of experience in a professional environment.

Agreeing the internship had been a good experience, Cameron admitted, “It keeps me out of trouble. I have another job at McDonald’s, too.” He is the only intern who doesn’t plan a career involving computers. He plans to drive big rig trucks since his father is owner/operator of Parker Trucking.

Blake said he liked the ability to do something he enjoyed doing, especially for his first job. He also gained professional experience for future jobs. He would like to start his college experience at Del Tech, then find a college that would prepare him to go into cyber security.

Collectively, their parents were at first interested but a bit scared about a new situation, Adriana said. “But our boss made sure we were comfortable and had everything we needed. Nothing was off limits.”

Cameron added, “My dad sold cars for 20 years before opening his own business. I’m a mini-him.”

Blake said, “Both my parents thought it was cool that I could do something I enjoy. I’ve always wanted to do something like this.”

The interns say efforts such as theirs to promote a business via social media will work for any small business. “Just promote the company in a trendy way,” Cameron said. “Everybody is on social media.”

Viswanathan has approached the school about recognizing his interns with school credit in addition to the pay he has given them. “The school said this is something that has never been done before. They’ve never been approached by a business like this. It’s a new experience for them and for me.”

Virginia Hastings, associate principal, commented, “We at Seaford High School are so very thankful for Mr. Viswanathan affording this opportunity for our students. Our students have had an amazing opportunity this summer in navigating marketing and social media in the business world. We look forward to building our relationship with Mr. Viswanathan and Lakeshore in the coming years and providing more internship opportunities for our students. When speaking with our students participating this summer, they are excited to share what they do, what they have learned and what future opportunities await them with the experience they have obtained.”

Their teacher, Luke Siler, said, “I’ve had the pleasure of working with these students for three years in the digital communication and technology pathway. We’ve had the opportunity to grow together as I’ve always modeled to them that I’m learning as I go as well. To see how they’ve matured and grown in their confidence has been rewarding. I’ve been impressed at how they’ve developed skill sets beyond what we’ve directly covered in class, such as working with video and audio, and that they’ve internalized the lessons that I’ve hoped they would. They know how to work together, identify their personal strengths and how to define and achieve goals.

“I also really appreciate how Santosh initiated this opportunity and took the time to come talk to my students directly about his business and what he was looking for. He also gave a lot of room for the students to think through the project and come up with their own ideas. It was a real world example of how one can be community and commercially minded with uncompromising integrity.”