As a young man, Robert Hathaway made a promise to a local police officer that once he finished service in the Marines, he would come back and join the police department. Unfortunately, a tremor in his hands kept him from becoming a Marine  — or a policeman. Instead, he became a truck driver, but he never lost his interest in police work. He started buying and restoring old police cars. Now in retirement and living in Seaford, he admits that hobby has become a passion.

Hathaway displayed some of his cars at Blades Night Out in early August.

The oldest is a 1965 Ford Custom two-door post inscribed “In Remembrance of Fallen MPDC Officers” in honor of officers in the Metropolitan Police Department in Washington, D.C.

He took this car in 2004, on his 50th birthday, to Ground Zero in New York City to pay tribute to the first responders who died there. “The Port Authority gave me permission to turn the lights on, and I got a police escort all the way to my hotel in New Jersey,” he said. 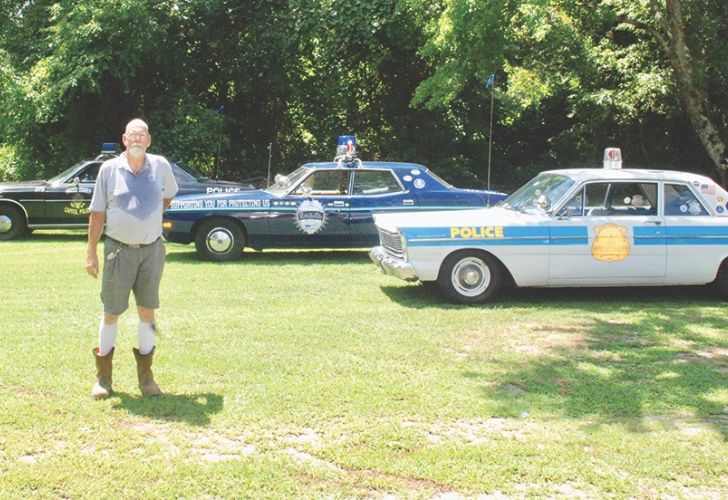 Robert Hathaway has three restored police cars at his home in Seaford, plus others in need of restoring, but he’s finding he has too many projects. Photo by Carol Kinsley

Hathaway also drove this car in the 2009 Inaugural Parade for President Obama. It was the only restored police car in the parade. “Some people were upset that there wasn’t a police officer driving it,” said Hathaway.

One is a 1971 Ford LTD, outfitted with a blue bubble light, and bearing an emblem that says “United for Blue” and elsewhere saying “thanking you for protecting us.”

Another, a 1973 Ford LTD Brougham Signature Series, is outfitted with a police package but was intended for department executives. This car came into Hathaway’s possession as a result of sitting at a bar with the past president of the Fraternal Order of Police D.C. Lodge 1, Officer Andy Maybo. Maybo commented that Hathaway had done a good job restoring the 1965 Ford and asked if he could come up with a Capitol Police car.

“I told him we’d need permission of Congress to use the federal seal on the doors,” Hathaway said.

Eight months later, Maybo called to say the Speaker of the House, the Sergeant at Arms in both House and Senate and the chief of the U. S. Capitol Police department had given their approval. Hathaway got a car from Lancaster, Pa., and restored it.

The ’73 Ford leads a procession during National Police Week every May when those who have lost a loved one in the line of duty go from a ceremony at the U.S. Capitol to lay a wreath at the National Law Enforcement Officers’ Memorial.

In honor of a cousin, a police chief in Sharpsburg, North Carolina, who was killed in the line of duty, Hathaway restored a 1985 Ford LTD Crown Victoria and gave it to the town. The town presented it to the family, who — not knowing how to take care of it — later gave it to a gentleman in nearby Rocky Mount. On the 20th anniversary of his cousin’s death, a parade and memorial service was held. “Twenty-seven police cars showed up,” Hathaway said. The parade progressed silently down the town’s main drag to the grave, “then there were sirens enough to wake the dead,” Hathaway recalled. “The family, and the town, loved it.” He’d like to see July 18 made a “day of remembrance” in Sharpsburg.

Hathaway prefers cars that are 30-years-old or older. “People call me and say, ‘Hey, Robert, I know where such-and-such a car is. Are you interested?’”

He has two in his yard now that he planned to rebuild, but he is finding he has too many projects.

“One is an extremely rare Bicentennial Car from the Columbus, Ohio Police Department, a 1975 Ford Torino Police Package, which is under restoration. Maryland has one like it in a museum,” he said. “People want it from me, but they want me to give it to them, and I’ve got a lot of money tied up in it,” Hathaway continued.

Another is a 1987 Ford from Pelham, Alabama, that has damage from a shotgun blast to the windshield.

And then there’s a 1964 Bruco Duplex Rescue truck, Squad 22, used by the Tuxedo-Cheverly (Maryland) Volunteer Fire Department as a haz-mat truck for more than 30 years. When Prince George’s County took over EMS for that area, Squad 22, originally red, was painted white like the rest of PG County’s equipment. It was sold into private hands in 1995, then to a family of firefighters near Annapolis. Hathaway said neighbors would not let the family build a garage for the truck and two other pieces of fire apparatus, so they sat in a field, rusting away, for eight years until Hathaway found and purchased Squad 22.

Squad 22 responded in 1982 when Air Florida Flight 90 crashed into the 14th Street Bridge over the Potomac River in Washington. Its sister truck, Hathaway said, was at the base of the second World Trade Center tower when it collapsed on Sept. 11, 2001.

“It’s a sole survivor,” he said. “The New York Fire Department knows I have this unit. They’ve suggested it belongs in a museum; it should not belong to a private individual. Because I’m a trucker, people think I’ll turn it into an RV.”

That is not his plan. He got it running — he is a mechanic and does repairs himself. He’s been told it would cost $75,000 to paint it. And if he does, people who care would like it re-painted red.

“This truck has had a hard history, but it saved a lot of people,” he said.

Hathaway has had a history of service too, in his 48 years as a trucker, driving nearly 13 million miles. He rescued a 19-year-old missing girl whom he heard moaning inside a dumpster at a truck stop. “She was scared to death,” he said. “I promised to take her home, and I did.” It was a journey of some 350 miles, with a police escort all the way. He helped at the scene of accidents. He helped out after hurricanes Katrina and Andrew, bringing in supplies for the Salvation Army and setting up a food serving station.

Hathaway was named the Delaware Motor Transport Association Inc.’s 2019 Driver of the Year in recognition of his “exceptional, safe, courteous and professional driving.”