When on summer break from college, one could imagine trips to the beach, lounging by a pool, relaxing. For one Seaford resident, her summer vacation was filled with many different adventures, from the glamour of the Miss Delaware contest to visiting a remote sector of Kenya.

Allison Dayton’s exciting summer began this year in June when she participated in the Miss Delaware Pageant. This wasn’t her first time as a contestant in Delaware’s premiere beauty pageant; Dayton took third runner up in 2021. This June, she took the position of first runner up in the contest.

“I started as Little Miss Riverfest at age three,” said Dayton. Her grandmother, Doris Dayton of Laurel, encouraged a then three-year-old Allison to participate in the contest. “In middle and high school, I stopped competing in pageants,” she said. 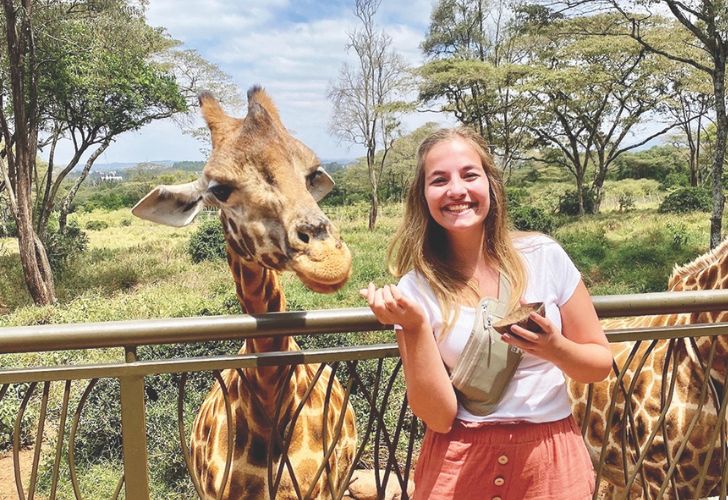 But then in her senior year of high school, and looking at the costs of tuition, her English and theatre teacher – Miss Delaware 2003, Erin Bobby – encouraged Allison to give pageants a second go-round.

In 2022, she became “Miss Brandywine 2022.” That title brought her a $300 scholarship. At the Miss Delaware pageant, she won $3,000 in scholarships. Through her competitions in pageants, Dayton has wracked up $8,100 in scholarship money so far.

She said she is contemplating whether she wishes to compete another year; the scholarship money is tempting. Winners of Miss Delaware acquire a $12,000 scholarship. Because she is planning to take up law some time after she graduates from college in Gettysburg in May of 2023, she admits possibly winning the scholarship is a huge draw to attempt the pageant scene once more.

Directly after her first runner up placing at the Miss Delaware Pageant, Dayton began one of two internships this summer. She first interned with Wicomico County state’s attorney’s office. She helped with trial preparation, filed paperwork, and shadowed state attorneys in court. That internship ended in mid-July.

Directly following, she embarked upon her next internship with a non-profit organization called “Kenya Gather.” Kenya Gather goes into remote villages of Turkwel and Siawa, and has established an educational program based around teaching young women how to sew and make a living.

“In these villages, men kidnap girls around the age of 14, rape them, then force them into marriage. It’s very eye opening,” Dayton stated. “By 16, these girls have already had two kids. The worst part is, they had no choice in the matter.”

She said that Kenya Gather gives young girls a chance to teach these girls a trade and protect them from forced marriage practices. “There are no job opportunities,” she said, “so the husbands give their wives permission to go.”

Allison found out about this organization through her best friend, who is the daughter of Alayna Aiken – the founder of Kenya Gather. The organization is based out of Millsboro. “It all started when she (Aiken) was on a mission trip, saw a need, and filled it,” said Dayton.

When asked if she would go back in the future, Dayton responded, “I would love to, but the travel is a 13 hour flight, then a five and a half hour flight, a one hour flight, then a four hour drive – it’s that remote. On the way back, I was awake for 40 hours. It’s a life-changing experience, though. I’m glad I went. We talked about it for years, and I couldn’t conceptualize it until I saw the people and women impacted by the work she (Aiken) was doing.”

Dayton will still work on her “social impact initiative” as Miss Brandywine 2022: “Active Aging – Bridging the Generational Gap.” Her goal is to connect young people with the elderly population.

“It’s a cause I’m passionate about and involved with,” she said. She stated her love of the elderly began when her grandmother Doris took her and her sister Mikayla to the Nanticoke Senior Center when she was 12.

From there she developed a pen-pal program, where she connected seniors in high schools throughout the state with senior citizens at Nanticoke Senior Center, Milford Senior Center, and Newark Senior Center.

“It was awesome. Collectively, we wrote about 350 letters. It was really sweet,” said Dayton. “It all started during the pandemic. I was a senior in high school, myself. I could kind of identify with the isolation senior citizens face during that time.”

Dayton earned credits in high school that will allow her to graduate early from college in May of 2023 with a double major of Sociology and Public Policy. Following graduation, she plans to take a gap year to assess her options. “I’ve always loved working with non-profits, and hope to continue doing so. The gap year gives me that extra year,” she said. Following the gap year, she is leaning toward attending law school.

Because she is a resident assistant at her college, Dayton recently began her final year at Gettysburg.