While many in the nation were watching and listening to television, radio and online new reports of the domestic terrorist attack on the U.S. Capitol in Washington, D.C., on Jan. 6, one Seaford mother was agonizing over not knowing the fate of her son.

Stephanie Smith, a former Seaford teacher and administrator, who now works as a principal in the Laurel School District, knew her son, Carter Moore, was being deployed on that day to support Capitol Police who were being overrun by pro-Trump rioters who had breached security and gained forceful entry to the Capitol building. 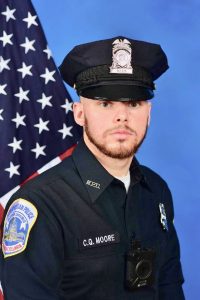 Carter Moore, a 2013 graduate of Seaford High School, was seriously injured during the Jan. 6 insurrection at the U.S. Capitol. He was beaten with a baseball bat by pro-Trump rioters who were attempting to delay or overturn the certification of President-Elect Joe Biden. Moore, who is a Washington, D.C. Metro Police Officer, is the son of Stephanie Smith and Mike Moore, of Seaford.

Smith thought, as did her son, that his role would be mostly relegated to helping with traffic control on the streets outside the Capitol. This because it was thought that there would most likely be ample backup from neighboring law enforcement and the National Guard. However, when Moore arrived it was only minutes later that he and his colleagues were ordered into riot gear and told to immediately move to defend the Capitol.

By this time, the insurgents had gained access to the Capitol building and large numbers of the militants began scouring the halls of the legislature in search of members of Congress who were identified as supporting the certification of President-Elect Joseph Biden’s election, this included most notably Rep. Nancy Pelosi and Vice President Mike Pence.

“Carter told me that when he arrived at the Capitol building the legislators had been evacuated from the House and Senate chambers and were being escorted through the tunnels below,” Smith said. “Capitol Police officers who had been trying to hold off the rioters from breaching the door to the tunnel needed to help provide protection for the members of Congress, so Carter and six others in his group took over defending the tunnel entrance.”

Video of the assault that took place at the tunnel entrance has been shown worldwide and recognized as among the most aggressively brutal attacks taking place in the hours of the siege. Rioters, many of who were waving U.S. and Trump flags, and wearing MAGA hats, began to pummel the officers, including Moore, as they screamed for the police officers to be dragged out of the tunnel entrance.

One Metro Police officer who was with Moore’s group, was dragged out of the tunnel by the overwhelming mob of attackers, who then savagely beat him with bats, sticks, and assorted other items, including the poles of the U.S. flags they were carrying. The officer can be seen in the video laying prone on the ground as he was beaten. Also visible in the video, lying near the officer, is the lifeless body of a female rioter who had been trampled to death by the mob.

On Thursday, Jan. 14, one of the rioters turned himself into the FBI after being identified as the person beating the Metro Officer with the flagpole he was carrying. Peter Francis Stager of Conway, Ark. had earlier been filmed with other rioters espousing anger-laced rhetoric about what should happen inside the Capitol building. “Everybody in there is a treasonous traitor,” he shouted. “Death is the only remedy for what is in that building.”

According to an FBI criminal complaint filed in preparation for charges against Stager, Field Agent Jason T. Coe said the Metro Officer, identified as “B.M.,” was able to see “hundreds of individuals” gathered outside the archway of the tunnel. “Some of these individuals were throwing and swinging various objects at the group of law enforcement officers,” Coe wrote. “While standing in the archway to prevent the group of individuals from breaching the U.S. Capitol building, and while wearing his official MPD uniform, some of these individuals grabbed B.M. and dragged him down the stairs of the Capitol building. These individuals forced B.M. into a prone position on the stairs and proceeded to forcibly and repeatedly strike B.M. in the head and body with various objects.” Based on tips and a review of two videos on a Twitter thread, the FBI determined that Stager was beating B.M. with a flagpole that had the United States flag affixed to the other end, according to Coe.

During the assault, Moore and his fellow officers were beaten with bats and poles and assailed by projectiles as they maintained their position and defended the tunnel entrance. At one point, Moore was grabbed by insurgents who attempted to pull him out into the mob. Smith said Moore’s supervisor was able to grab his arm and prevent him from being dragged out.

“Carter told me he thought for sure he was going to die,” Smith said. “He has served with the Metropolitan Police in southeast D.C., for the past year and before that spent six years with the U.S. Army stationed around the world. He said this was the first time in his career that he truly believed he was about to die.”

While Moore did not lose his life on Jan. 6, he was seriously injured. Among the trauma he suffered at the hands of the vicious mob, was being beaten over the head with a baseball bat, one blow which shattered his face shield and two additional blows that rendered him unconscious and suffering a traumatic head injury that resulted in swelling on the brain.

Smith said her son had wanted to be in law enforcement since he was a little boy growing up in Seaford. By the time he graduated from Seaford High School in 2013, he had been a member of the Seaford Volunteer Fire Department making regular runs as part of the ambulance squad. At the age of 15 he was formally honored for his efforts in saving a life during one ambulance run.

Later the evening of Jan. 6, a friend sent Smith the video of the terrorist assault on the Capitol building tunnel posted by TMZ. Fortunately, Smith had by now been in contact with her son and his fiancée and was aware that although injured, he had survived the ordeal. Smith went to Annapolis, Md., where she picked up her granddaughter and brought her back home to Seaford while her son was under doctor’s care and his fiancée was serving duty with the National Guard.

She said she watched the video several times and that evening she posted on Facebook about it. “I looked at the picture of one of his [Carter’s] friends down in front of the doorway where Carter was. It makes me angry, but also very grateful that my son is still here. He said he thought he was going to die. As I lay in bed with his little girl snuggled up against me asleep, I can only thank God that my child, her daddy, was spared and if I come across the guy in the red hat fighting Carter well…God help him,” she wrote.

Smith said she does not believe that the violent siege of the U.S. Capitol will deter her son from continuing as a law enforcement officer. However, she fears that after being brutally attacked and almost killed, in some ways, he may never be the same. She fears that her son and other law enforcement members may suffer Post Traumatic Stress Disorder (PTSD) due to the sheer brutality and conditions of the attack against them.

Smith is also frustrated that it took so long for the necessary additional law enforcement officers and National Guard to be deployed to support the heavily outnumbered Capitol and Metro police officers. It was hours before police and National Guard were able to push rioters out of the building and off the grounds of the Capitol, just prior to a mandatory 6 p.m. curfew implemented by Washington, D.C. Mayor Muriel Bowser.

Smith said she is angry about how the Jan. 6 terrorist attack unfolded, but will forever be grateful that her son was not injured any worse, nor killed. This given that five people died during the attempted coup. Those who died included Capitol Police officer, Brian Sicknick, 42, who suffered head trauma after being pummeled with a fire extinguisher. Also killed were rioters, including Ashley Babbitt, 35, a 14-year Air Force veteran, who was shot while breeching an entrance to the House Chambers and Rosanne Boyland, 34, who was reportedly trampled to death during the riot. Two others apparently died of medical emergencies including a stroke and a heart attack. Following the attacks, another police officer and one of the protesters died by suicide, according to media reports.

Smith said she cannot help but be angry, sad and frustrated by what occurred at the nation’s Capitol. “It hurts my heart that the first time my son has been injured and felt as though he was about to die was at the hands of Americans,” she said. “He has served with the military in Korea and Germany and spent the past year policing in a very dangerous section of Washington, D.C. I am literally heartbroken that this attack on the Capitol was carried out by other Americans.”

Following his injuries, Moore was taken to the hospital where he was diagnosed with a concussion, and a traumatic brain injury. On Thursday, Jan. 14, Smith reported that her son had received a second CAT scan and the brain swelling had been reduced and he had been cleared to return to work on light duty.