Plans include water splash park; residents are asked to give input in survey

Potential changes to Trap Pond Park were introduced at a meeting at the Baldcypress Nature Center on Wednesday, July 6. Those changes include improvements to the entrance of the campground, the camp store, and a possible water splash pad at the park.

Ray Bivens, Director of the Delaware Statewide Parks, said it’s a changeup from the original plan presented 15 years ago. He stated Representative Robert Venables got partial funding for a full-blown waterpark. However, the waterpark did not come to fruition. The parking area was created, the Baldcypress Nature Center was built, and improvements to the entrance were made. “I’m excited as a park director that all of the infrastructure has already been put into place,” Bivens said. 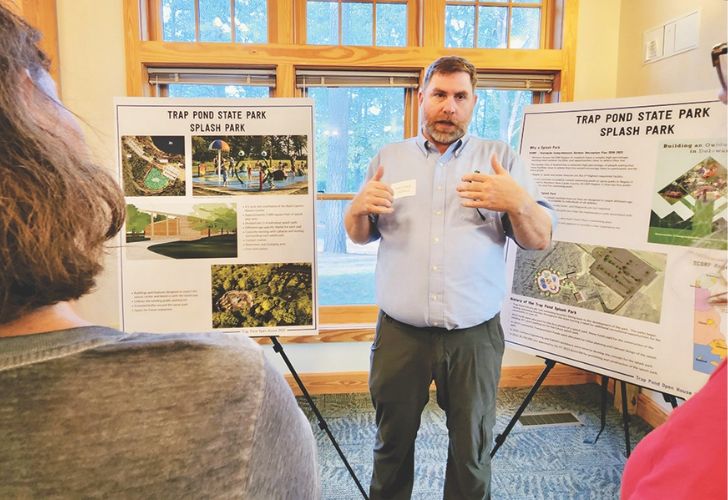 A recent $3.2 million federal grant to improve cabins and boat docks in the state was awarded due to the efforts by U.S. Senator Tom Carper. That grant is designed to help make the state parks in Delaware more competitive nationally. Bivens said the water splash pad is part of a “cluster development” plan – “so we can create a walkable campus, with the playground, boat rentals, and the splash pad.” The splash pad will be designed to suit the needs of children ages two to 11.

On the 4.5 acres of land the splash pad is slated to occupy in the park, Bivens explained how the water system will work. He said it will be a self-contained unit. The water spouting goes down into hidden drains. An apron of some sort will surround the pad. The water will be piped back to a maintenance building, to be treated to be reused. He noted that other water will be added to the pad, but he reiterated that it is a closed system that will not interfere with the pond.

“The goal is, if you’re on the pond, fishing, you won’t be able to see the splash pad from there,” Bivens said. In response to those who showed concern about keeping as much forest as possible, Bivens responded that 20 years ago, people were furious regarding the Breakwater Trail. Also, ‘We’ve built on five percent of the land. It’s still 95 percent undeveloped.”

“We ask each region what they feel is needed to improve the parks, and make them more enjoyable for those inside and outside of the state. So, people answered. One, we need more trails; we need more opportunities to get wet,” said Bivens. “Water quality has been an issue on the pond. People used to swim here. Currently, our goal is that Trap Pond becomes the largest state park in Delaware. Currently, it’s Cape Henlopen.” He noted that Trap Pond Park has surged in popularity the past seven years.

When asked how Trap Pond will reach that goal without hurting the wildlife around it, Bivens said, “It’s over 4,000 acres. When we buy land, we try to get property that is next to ours. Our goal is to buy large sections of land for trails, hunting and birdwatching. We need to have access to water.”

At the moment, the splash pad is in its conceptual stage. Bivens said the next step is to take it to construction drawing to go to bid, then hire a vendor to construct the structure. “If all goes well, it would take about two years before it’s complete,” he said.

“The work that we do in the state parks is not about the paycheck,” Bivens stated. “Fifty percent of all of the work done in a state park in the state of Delaware is volunteer. We get to reap the benefits of the talents others bring. We couldn’t do what we do without our volunteers. Sixty five to 70 percent of our operating budget comes from user fees.”

Bob Ehemann, Manager at Trap Pond Park, said that part of a two-to-three-year window, and combining public, staff and consultant input, Trap Pond Park hopes to develop improvements to the campground area. “Creating an F-loop behind the cabins is something we’re considering,” he said, “we’re excited about the process.”

As part of the EDA grant, Ehemann said they were “rethinking and replanning cabins.” As part of the “master plan,” he said the park wanted to look at the way things are now, and incorporated into a 10-year vision – “what they like, don’t like, and what they would like to see at the park. The survey will hopefully help make more solid and thought-out decisions.”

Regarding the survey, Director Bivens said the purpose of the evening was to get the opinions of local residents, state residents and out of state visitors. At the center that night, surveys were on the table for those in attendance to fill out and give their opinions on the potential changes to the park. The survey will also be online for anyone interested to fill out.

Bivens said the public survey will be available to fill out for three weeks, and is available at Trap Pond, online, or call 302-875-5153 for more information.