“I’m soaking everything in. I’m super excited to catch the baton and go forward,” said Powell, who is hopeful that the event will return to the Ross Mansion grounds in Seaford. This was the first year the festival has taken place on the grounds of the former plantation. 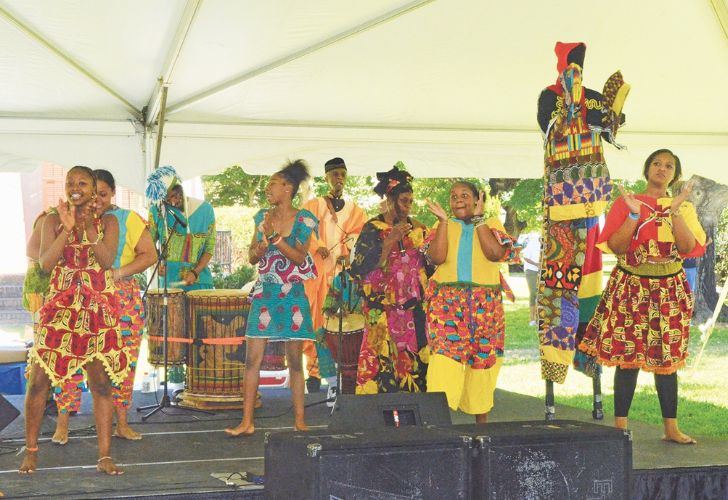 The Universal Dance and Drum Ensemble of New Jersey is shown performing during the Eastern Shore AFRAM Festival last Saturday in Seaford. The group has a total of 77 members, with some of that group making the trip to the grounds of Ross Mansion. Photo by Mike McClure

“AFRAM has found a new home. It’s new to some but it belongs to us all,” Jones said. “This has always been a dream in the whole 25 years I’ve been doing AFRAM, to be in the right place in the right time.”

Ross Mansion Manager Margaret Alexander spoke about the history of Ross Mansion, which was the site of the only documented slave quarters in Sussex County. Alexander said the Ross family had 14 slaves in 1860.

“I’m feeling bittersweet here (after hearing about the history of the grounds). My heart fluttered. This is a hallow, sacred place,” said U.S. Representative Lisa Blunt Rochester.“We call them people who were enslaved because they were people before they were slaves.”

“The vote is our power. It says we are equal to anybody else,” she added. “People died, sweat, bled for us to be here. Today, celebrate, remember, and then live up to the legacy of our ancestors.”

“Pat, we love you, appreciate all you’re doing and all you’ve done,” said Short.

“You put together a great event for a great reason, to bring the community together,” Vincent added.

Following the opening ceremony, the group made a procession to the site of the slave quarters for a libation ceremony to “let our ancestors know that we have arrived,” Jones said. Jones laid a wreath at the site of the foundation of the ash house, which is all that is left of the building where slaves disposed of ashes. A moment of silence was held before Pastor John Moore led the group in prayer. Moore noted that Aug. 28 will mark the 59th anniversary of the march on Washington, D.C., and Rev. Dr. Martin Luther King’s “I have a dream” speech.

“We’ve come a mighty long way from that time. We still have so much work to do,” Moore said. “You never know where you are going until you know where you’ve come from. We should be proud of our color, proud of who we are.”

After the libation ceremony, in which water was poured near the ash house foundation, Fuller led the group in the singing of “We’ve Come This Far By Faith.”