A group of Laurel residents have taken an active role in creating a positive image of the town through community-based service projects, events and other projects. The One Laurel concept was adopted through a community awareness project initiated by the Laurel Public Library. Due to the COVID-19 health crisis, the library was unable to continue focusing on the initiative and members of the Laurel community stepped up to continue.

According to information provided by the One Laurel Steering Committee, the project was formed as a means to “foster greater pride in our town and to encourage and invigorate ownership in all things Laurel.” The One Laurel’s motto is ‘Share-Inspire-Do.’ 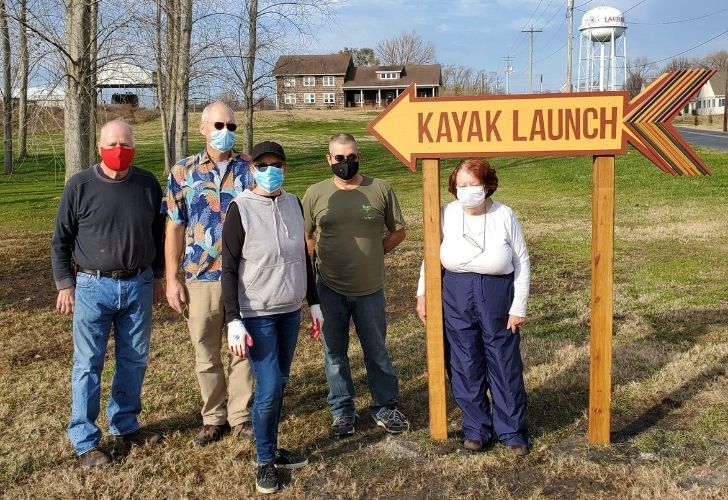 A new sign directing people to Laurel’s kayak launch site along the Broad Creek, has been built and erected by the “Pride and Ownership” committee of the new “One Laurel” initiative. From left to right are committee members, Al Erskine, Brian Seeba, Ann Davis, Richard McVey and Barbara Erskine. Photo by Michael Flick

The “One Laurel” mission statement addresses awareness on several community fronts and describes an ambitious agenda. According to information published by the group, “Our mission is to grow equality and racial awareness in the town of Laurel through: cultural awareness, community revitalization and the creation of opportunities for economic empowerment. Additionally, our focus is to construct new relationships, by promoting equality and diversity. We hope to end racism and galvanize the residents of the town of Laurel into action.”

An Open Mic Night, food giveaway and a basketball tournament are some of the projects that have stemmed from the grassroots efforts. Recently, another project undertaken by one of the subgroups of the One Laurel project came into fruition. A new sign has been built and erected to help community members and visitors locate the new Nanticoke Rotary Kayak Launch along the Broad Creek.

According to a representative of the “Pride and Ownership Committee,” one of the One Laurel subcommittees, committee members, “broke out the post-hole diggers and got their hands and feet muddy” erecting the directional sign in the shape of an arrow near Broad Creek.

Rick McVey, who is also a member of the One Laurel’s Steering Committee said the sign was inspired by the Laurel Ramble with its themes of nature and a focus on the Nanticoke Indian tribe. The new sign directs kayakers to the public kayak launch which is located on Broad Creek near North Poplar Street in Laurel.

According to McVey, the kayak launch is one of Laurel lesser known amenities. The kayak launch is free and open to the public, and open from dusk until dawn. The kayak launch boasts of an “EZ-Deck EZ Launch” and is attached to a floating dock. “All the kayaker has to do is carry their kayak to the EZ Launch and place it down in the cradle,” McVey said. “The launch keeps the kayak and kayaker high and dry until they are safely seated in their kayak. In order to launch, the kayaker places their paddle in grooves in the launcher and pulls themself forward into the water.”

McVey said many people, including those living in and around Laurel, are not aware of the kayak launch or how to find it. “There are many people moving to Laurel everyday who are not aware of what our town has to offer,” he said. “With the lack of signage for the launch the only way for people to know that it exists is by word of mouth. We not only created and installed the sign but we also created a pin on Google Maps that should appear in searches in the near future.”

The committee plans to continue developing opportunities to promote Laurel and bring attention to its many attributes. “We are working on a gateway sign for the town that will be donated for installation in the U.S. 13 median area near the location of the previous gateway sign,” McVey said.

A project to paint a mural on one of the open walls of the Paul Lawrence Dunbar school building is also being planned. “The mural project is being planned in conjunction with Dana Paternoster, an art teacher at Laurel High School and the students in her art class,” McVey said. “The students are working on an art class project that shows pride, ownership, unity and diversity.”

He said one concept will be chosen by the “Pride and Ownership” committee and be presented to the town council for final approval. Once approved by the council, selection will then be the subject of a mural to be painted on the former Paul Lawrence Dunbar School, on the end wall of the gymnasium facing 6th Street.

McVey said he feels the One Laurel project is meeting the goals of its mission to promote community awareness and diversity. “Needless to say there are always challenges when you are trying to initiate a new concept for a co-operative engagement. Especially, in a town as steeped in tradition and heritage as ours,” he said. “The One Laurel steering committee and groups have done an amazing job of bringing people together and encouraging our town folk to come out and be a part of the community and show their pride in their town and our love of community. This movement is about reaching out to each other, understanding each other, and working through any differences we have by maintaining respect and dignity.”

The One Laurel project is relatively new, but has maintained an aggressive strategy. “I think we have come a long way,” McVey said. “We have hosted several community events and we are also including a special safety message in the town’s newsletter. Our mandate in the future is going to remain with emphasis on the younger generations of the town, who are our real future.”

McVey sees the One Laurel initiative as an opportunity for citizens to play a role in the town’s destiny. He said he is seeing a great deal of excitement around the project, something he feels is indicative of the community’s desire to be a part of the mission.

“The citizens of Laurel have been waiting for something that they can be a part of, something where they can make a difference and feel that they matter, and that their ideas can be shared with others who are ready to step up. This is the place. We want anyone who seeks to be a part of the project to join us and become the change that you desire and believe in,” McVey said.