The Seaford City Council, along with a full house of Seaford residents. listened to the presentation for the development of Nylon Capital Shopping Center. Robert Herrera, partner in Ninth Street Development Corporation, LLC (NSD), told the council that it is an evolving project with a vision.  The idea is an innovation district that will bring together multiple avenues to connect economic, networking, and physical assets.

Herrera, a real estate developer and partner of NSD, shared he and his partners began when transforming a street in Wilmington that was deteriorated and said, “We worked really hard with small equity and we transformed an area of our city.” 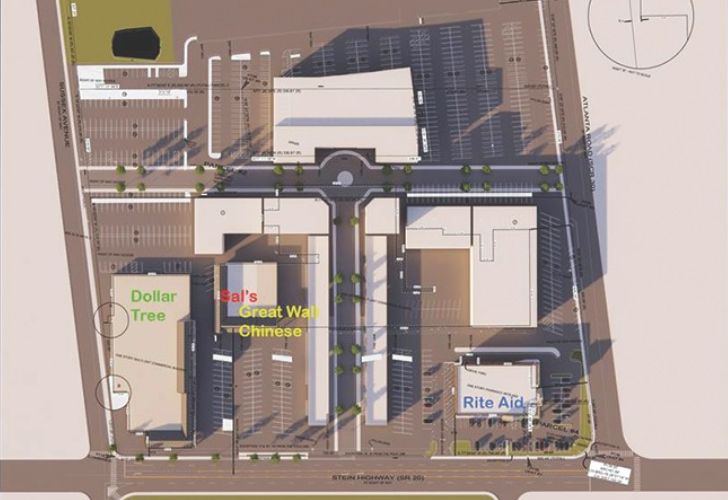 Shown is a layout of the Nylon Capital from a PowerPoint presented at last week’s Seaford Council meeting. Photo courtesy of the city of Seaford

The team continued to uplist other areas of the city.

The team is now committed to bring their talents to Seaford and the deteriorated Nylon Capital Shopping Center which they purchased and settled on one month ago. The center is 243,000 square feet of buildings located on 22 acres. The NSD told the council they plan to respect all existing lease holders with some possible shuffling and have been in open communication with businesses including Rite Aid.

Herrera said the goals include to build an innovation district, rebrand the entire campus, attract innovation drivers and institutions to their concept, bring neighborhood amenities, connect with the broader township and community. At the core of the center will be research and medical institutions, co-working areas, start-ups, entrepreneurs focused on developing technologies, products, and services as well as highly specialized small-batch manufacturing.

“The Del-Tech Community College is committed to build a work force training site. I couldn’t think of a better partner to reposition this entire site for,” Herrera said.

There will be two strong programs launched in comprehensive healthcare training and industrial training programs.

Herrera pointed out the success of Wilmington to help residents see how this can work for Seaford. “On April 1, 2016 we opened in Wilmington with 13,000 sq. ft and it has grown to over 90,000 square feet and we have opened a second location.”

Herrera said co-working area studies indicate people are more satisfied and successful when in this environment, which is why it is so successful.

Additionally, there will be other neighborhood amenities and Herrera said retail will drive innovation and collaborate with the district which will include a coffee shop, medical offices, grocery stores, retail that fits the vision and goals of the innovation campus. He added other pursuits include bowling, retail/restaurant, and a grocer. Long term possibility would include a phase II and apartment living.

Additionally, the district will include public space with plazas, streetscapes, and street furniture. The campus is intended to be walkable and bikeable and to create spaces that allow for individuals to have more choices.

The evaluation of the property and buildings was of no surprise. They are in very poor condition and open to elements. The back buildings will be demolished and the developers will install stabilization walls and demo everything east of Great Wall.

Plans are still in development and Herrera said his company is very open to the residents’ feedback and ideas. A QR code was provided which will open up a site for feedback and questions.

Mayor David Genshaw said, “You are the right person for this job and the timing is great. The  governor is incredibly supportive to Seaford and we are very excited.”

Councilman James King inquired about a timeline and Herrera said demolition will take place within the next four to six months. The team would like to break ground for Del Tech by end of 2023 and the goal is to complete the entire project by end of 2026.

Chris Derbyshire, city engineer, and Berley Mears, director of public works, presented to council a recommendation related to the abandonment of the Dulaney Well and improvements necessary to the Nylon Well to maintain adequate domestic water production. Dulaney Well was taken offline in 2021 due to radium levels and GMB was contracted to explore options.

Manokin aquifer is a much lower yielding and may need several weeks to achieve levels required and will have contaminants that will require treatment. This did not meet needs of the city and would cost approximately $6.3 million.

A treatment option is with onyx exchange in which all radium is removed and blended. There are challenges to this method, the radium will be concentrated that must be discharged. Therefore, it would go into the sewer and DNREC would increase requirements at the wastewater treatment facility. This cost would be about $1.8 million.

Tapping into the Columbia Well would be new and would cost about $1.8 million but it would be extremely difficult to get a certificate from DNREC.

An evaluation of the water model status was completed with the recommendation to bring the Nylon Well back on-line. The Nylon Well, built in 1959, has been out of service for years because of operational concerns and constraints with being underground. If the money is allocated to bring Nylon Well back into service it will provide benefits by replacing the lost capacity of the Dulaney Well. Also, it will bring allocation closer to what is necessary and provide the city more flexibility. The current location of the well would have to change.

A Nylon Well design would be approximately $1.7 million with much of the cost going to piping.

Over the next six to eight months the preliminary engineering report will be developed for presentation to council. A more solid recommendation with cost will be presented to council members. The council members agree that cost is a factor but the safety of the citizens is more important. They will wait for the report to consider any recommendation. The evaluation is funded by a 50/50 planning grant through Department of Health.

Superintendent of Parks and Recreation Katie Hickey presented and received approval to participate in the Innovation Grant. This grant, a 2022 Cycling Infrastructure Innovation Grant, will focus on the intersection at SR-20/North Front Street/Bridgeville Hwy/Norman Eskridge Hwy known to locals as the Dunkin Donuts intersection.

The idea is to create a safer route for bicyclists and walkers. Hickey pointed out that there are four schools within walking distance of the intersection as well as local businesses. The idea is to reduce vehicle speeds, provide safer pedestrian walkways, and create protected bike lanes. The purpose of the grant is to review feasibility of the design. The funds are at no cost to the city for the evaluation of the design.

A presentation for approval of a resolution adopting the Sussex County, Delaware Multi-Jurisdictional All Hazzard Mitigation Plan Update as the official All Hazzard Mitigation plan for the city was approved 5-0 by council members. This enactment will protect the city in the event there are damages from hazard events which pose a threat to public health and safety and result in property loss and economic hardship. The plan recommends hazard mitigation actions that will protect people and property affected by hazards within the city.

Police Chief Marshall Craft presented and received approval for four lease agreements with Enterprise Fleet Management for 2023 Ford Police Interceptor Utility vehicles to be delivered in the FY2023 budget. The department is currently awaiting delivery of four vehicles that were approved in 2022.

There is a City Planning Session scheduled for Friday, Jan. 27, 2023 from 8:30 a.m.-3:30 p.m. The city of Seaford municipal election will take place on Saturday, April 15 in City Council chambers. Two Council seats for a three-year terms are available. The last day to file for candidacy is Feb. 24 at 5 p.m. For more information visit the website at seafordde.com