Trap Pond State Park received its custom-made pontoon boat in late July, and it was a sorely needed purchase.

Will Koth, manager of interpretive programs at Trap Pond, knew eight or nine years ago that Trap Pond was going to need a pontoon boat that could accommodate more passengers. 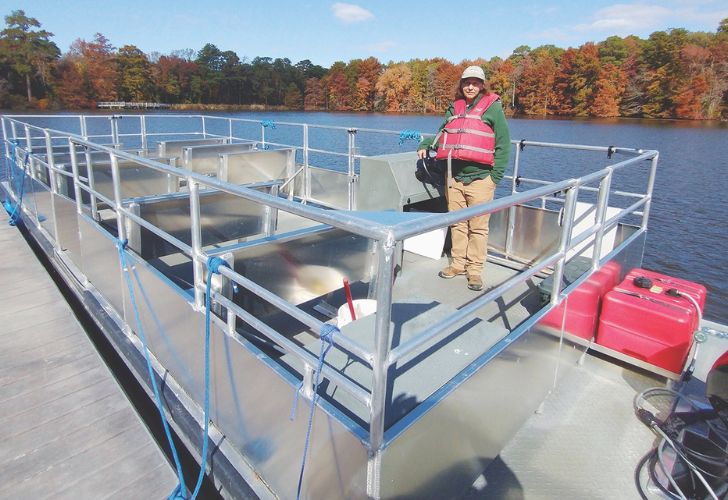 Pictured is Diane Twining, interpreter and one of the pontoon boat pilots at Trap Pond State Park. She is standing on Trap Pond’s new pontoon. Photo by Laura Hambrick

Trap Pond hosts pontoon tours from the third week in April until the third week in October, tours of the pond have varying themes such as bird life, fall foliage, and the history of Trap Pond. The one or one-and-a-half hour tours are popular-so popular, in fact, that running the tours from 9 to 5 was not meeting the demand of all of the customers who wanted them, according to Koth.

“We couldn’t keep up with the demand,” Koth said. He started looking around at boats almost a decade ago, to help determine the exact needs and specifications of a future boat for the popular tours.

The old pontoon boat, while still in good shape, could only accommodate eight passengers and the boat pilot. The new pontoon boat, with a maximum weight capacity of 4,800 pounds, has seating for sixteen adults and the pilot, doubling the number of visitors that can enjoy the tours at one time.

The new boat has the same size deck as the old boat, Koth said, but the pontoons, the watertight metal cylinders that give the boat buoyancy, are much larger, therefore giving greater weight capacity to the boat and enabling the boat to run in shallower water.

Moreover, the new boat’s seats are very comfortable, Koth said, and “Everybody gets a great view.” The boat is also fully handicap-accessible.

The new boat was built to custom specs by Clark Boat Company in Bellevue, Iowa, for a cost of $78,800. “It was an incredible deal,” said Koth, who said they got the exact boat they wanted. They fully expect the boat to serve them at least as long as the old boat, which was in service at Trap Pond for 20 years. (The old boat was given to Delaware Seashore State Park, for use at their marina.)

More tour availability is good for customers as well as Trap Pond State Park. According to Shauna McVey, community relations coordinator for Delaware State Parks, the Division of Parks and Recreation (DNREC) is 65 percent self-funded through programs, fishing and hunting passes, and more, including pontoon tours.

In season, Trap Pond runs scheduled boat tours through their website (destateparks.com, then select Trap Pond State Park), as well as “walk-on” tours (sign up at the Nature Center on the event day, starting at 9 a.m., or mid-summer go straight to the boathouse to sign up). In mid-summer, said Koth, if there is a 9 a.m. boat tour scheduled and it fills up, they will run another tour at 10 a.m., and if that fills up, another tour at 11 a.m., and so on.

“Tours in September filled up quickly,” Koth said. Though the boat arrived in late July, no boat tours were offered until September 1, allowing staff the month of August to get trained on use of the new boat.

Koth emphasized that Trap Pond encourages groups to set up specialized boat tours with them, such as a family tour, Girl or Boy Scout tour, school group or environmentalist group tour. Specialized tours cost only $75 for the entire boat and pilot, and can run as early as 6 a.m. or as late as after dark. The group can also pick the theme of the tour. And because children are smaller and weigh less, the boat can fit 20 or more children at once, making it ideal for a school outing. (Call the Trap Pond Nature Center at 302-875-5163 for more information on specialized pontoon tours.)

The season for boat tours is quickly coming to a close: the Fall Foliage Tours scheduled for the first week of November, the last of the season’s boat tours, are sold out. Koth encourages patrons to check the Delaware State Parks Facebook page in April for the announcement of the spring 2023 Trap Pond Pontoon Tours.