Bridgeville farmer and member of the Woodbridge School Board, Jeffrey Allen, is enduring an extended stay in Baltimore after an operation to receive a bone marrow transplant on Jan. 8 to treat his leukemia at The Johns Hopkins Hospital. The willing donor was his 13 year-old daughter and Woodbridge Middle School student, Devon Allen.

“My super hero Devon came to town today!!!” Jeff Allen shared in a post on social media Jan. 7. “Got my radiation today and still feeling great!!… God’s got a plan, just have to have faith and follow.” 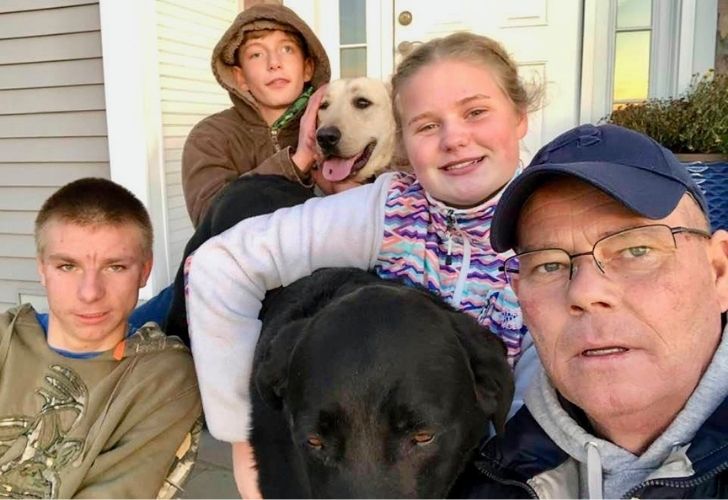 Jeff Allen is shown with his sons, Travis and Blake, and daughter Devon and their dogs. Devon donated bone marrow for Allen’s recent bone marrow transplant to treat leukemia.

Jeff was surprised to learn in the fall of 2020 that he had T-type leukemia. This is not his first battle with cancer. A few years ago, he had Non-Hodgkin’s lymphoma that was treated with chemotherapy called RCHOP, which he was told had a 16 percent chance of leading to leukemia in the first five years of remission. He said he was just 18 days from year four of remission when he got the news.

“The hard part is my grandfather had Non-Hodgkin’s lymphoma at my same age of 47 and he died,” Jeff shared. His brother was also diagnosed with leukemia in 1982 and died 18 days after graduating from high school.

“I continue to remind myself medicine has advanced and God has a different plan for all of us,” Jeff added.

His medical team recommended a bone marrow transplant as the best option for saving Jeff’s life.

“I may have raised five children but Devon is the only one that is biological,” Jeff said. “There were other options for bone marrow donation but her being the donor was the best chance for success. When given the option to donate she never questioned…She saved my next chance at life by giving.”

Devon said that she was worried about the procedure, not for her operation but concerned that her dad’s body would reject the transplant.

“I am feeling fine and ready to get back to riding my horse Vinnie,” Devon said this week. She was able to return home just a couple days after her donor surgery.

When asked about her father, she shared, “I love his personality and how he cares and worries about everybody’s safety and happiness, while still being to the point.”

Heather Taylor, Bridgeville native and secretary at WECEC, has known Jeff Allen for more than 40 years and considers him like a brother.

“To know him is to love his very strong will and determination. When he sets his mind to do something, there is no holding him back. Fighting this cancer is no different!!,” Taylor said. “His family is his world and he still has many milestones to share with his kids. He has very strong faith and large circle of supportive friends. He will beat this…there is no doubt in my mind!!”

Taylor and her children do many activities with Jeff and his family, like youth horseback riding.

“Devon has the same strong will and determination as her father. She is a hero to all of us for her bravery in being Jeff’s donor. But she does not see herself as that… she did what she had to do for her dad. Simple as that,” Taylor said.

Support was critical in order for Jeff to proceed with this treatment. Johns Hopkins required that he stay near the hospital and provide a list of caregivers that would be with Jeff around the clock for the 68 days of treatment. He is scheduled to remain in his Baltimore apartment with daily visits to Johns Hopkins until March 10, though he would like to be home by his birthday on March 4.

His life-long friend Cathy Vincent was with him during the time he went to Baltimore in preparation for the operation.

“Jeff is a warrior! He’s been amazing through his battle with acute leukemia,” Vincent said. “Devon is just like her dad. Always has a smile on her face and willing to help at any time.”

“I am very fortunate. I have an awesome support team,” Jeff said. “They have taken time from their home, families and jobs to stay with me.”

Steve and Shelly McCarron were among the friends who stayed with him for several days this month. Steve is a fellow school board member who has grown to know Jeff and his family more over the past five years with their children’s involvement in 4-H and school.

“Jeff always has an outgoing personality. He’s a selfless person who likes to serve his community and put others above himself,” Steve McCarron said.

Steve said that during his first couple days staying in Baltimore, Jeff was active and even cooked dinner. Then, one day Jeff experienced an allergic reaction after receiving platelets.

“It was like a light switch, he suddenly changed. Things can go bad in a hurry,” Steve commented, noting that it became evident why the 24/7 care was necessary. “He’s had a very positive attitude through this whole thing and that’s what will get him through.”

Jeff has regularly shared updates on social media since the bone marrow transplant. He has struggled with soreness, radiation burn, weakness, rash, skin biopsies, hair loss and more. Despite the challenges, he often shares with unique humor.

On Saturday, Jan. 30, Jeff posted this on his Facebook page, “I don’t feel too bad just sleep around the clock… I need to turn in my W-2 to JHH seven days a week, min of five hours a day.” The hours he is at the hospital for treatment are almost like a full-time job.

When asked about his motivation to fight and endure all the treatments, Jeff says it’s first his children then supporters that give him strength.

In addition to Devon, Jeff has two middle school aged sons living at home, Travis and Blake. According to Jeff, they have played a special role in keeping the farm going while he is away. His oldest daughter, Sydney, came home from Arizona State PHD program to watch the house and dogs while supporting her siblings and grandparents. Virtual learning as a result of COVID made this possible.

He praised all those helping at home and coming to Baltimore.

Early last year and in 2019, Jeff was the one offering tireless support to a local family with a young daughter who had terminal cancer. Bella Moore was a lively seven year-old first grader at Woodbridge Early Childhood Education Center who battled brain cancer and passed away on May 13, 2020. Jeff spearheaded fundraisers and community events to help give Bella and her family many great experiences her last year of life.

“I believe God is using me to connect to others,” Jeff said. “You know my theory. There may be bumps in the road, but the road is made, we just have to have faith and follow.”