A Laurel youth advocate and school district para-professional was recognized recently by the town’s Mayor and Council and police department for his help in providing aid to a stranger in need. During the Monday, Nov. 16 meeting of mayor and council, Mayor John Shwed introduced David King and lauded him and his wife, Stephanie, for their willingness to take time out for someone whose health and well-being was at risk.

King explained that he and his wife were on the way to church on a Sunday morning when they passed a man pushing his bicycle in tall grass off to the side of the road. He turned his vehicle around in an effort to see if he could lend assistance. The Kings found the man to be extremely tired and somewhat disoriented. 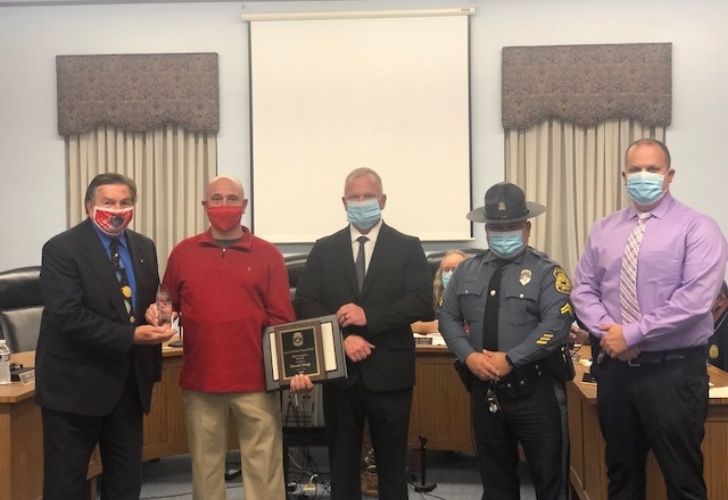 Laurel resident David King was recognized during a recent Laurel Mayor and Council meeting for his efforts to help a stranger in need. King and his wife Stephanie stopped to help a man who was later discovered to have become disoriented after riding his bike for 26 miles to the Laurel area from Maryland. King received commendations from the town and the Police department. Pictured (left to right): Laurel Mayor John Shwed, David King, Laurel Police Chief Danny Wright, Cpl. Carlos Granados and Cpl. Tyler Bryan. Photo courtesy of Jamie Smith, Laurel Town Manager.

“At that point we loaded him up and took him to church and were able to get him food and drink. “I notified Chief Wright who suggested we take him to the police station so officers could do a welfare check,” King said.

Chief Wright said Cpl. Carlos Granados made attempts to locate the man’s family. He was able to make contact with family and transport the man back to his home in Maryland. According to Wright, the man had left his home in Maryland to go to a store in Hurlock. He became disoriented and ended up in Laurel. He kept riding and pushing his bike in the Laurel-area, attempting to locate his home.

“This man had been on that bike for 26 miles when David and his wife found him,” Wright said. “He was extremely fatigued, hungry, and thirsty and had become disoriented. It was fortunate that David and his wife located him and were willing to ensure he was able to rest and be given food and water. I commend their actions.”

Both Mayor Shwed and Chief Wright recognized King and his wife for their willingness to render aid to someone in need. Shwed presented King with the “Mayor’s Commendation for Public Service Excellence.” This award, Shwed explained, is presented to citizens who go “above and beyond” in service to others.

Chief Wright awarded King the police department’s “Citizens Citation” for service to the community. He also honored King with the “Chief’s Citation” for “selfless dedication to the safety and security of our community.” Wright said this citation is the highest honor awarded to Laurel Police Officers, and said that King “absolutely deserved it.”

Wright went on to express appreciation on behalf of the police department and Laurel community. “I am glad to have come to know you and call you a friend,” he said. “You are a kind and generous man. You did not have to do all you did for this gentleman, but you did. It reveals your outstanding character. We need more people like you in our community.”

King, who is a Behavioral Para-Professional in the Laurel School District, also volunteers for Laurel Youth Sports and helps to coach the Laurel High School basketball team. He and Mike Snead, who also works in the Laurel School District and is President of the Laurel Little League, recently organized a youth basketball tournament in the community. The two also have also organized a youth mentoring initiative known as “Project SAFE (Students Achieving Fundamental Excellence).” The program provides life skill development activities for young men ages 14 and under.