The Lions Trophy remains with the Laurel Bulldogs for the 17th consecutive year after Laurel defeated Seaford, 28-0, last Friday at Bob Dowd Stadium in Seaford. The annual football game, dating back to 1936, is one of the longest running rivalry games in the state of Delaware with the Lions Trophy presentation beginning in 1946. The winning team holds the trophy, which is made of polymer from the DuPont plant and the football of walnut from the town of Laurel, representing the towns’ once flourishing economic industries. The Friday night win breaks the record for longest winning streaks between the teams at 17, with Laurel taking the trophy since 2004. 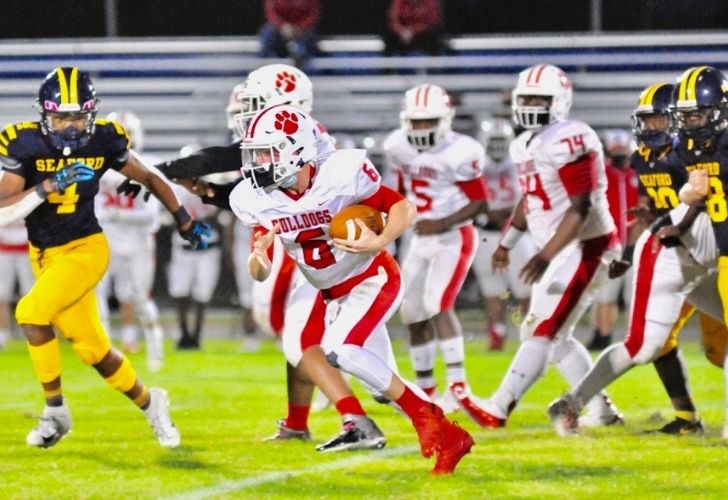 Laurel head coach Joey Jones said of the trophy win, “It is exciting for these kids and to have this trophy. Laurel has held this trophy for most of these guys’ entire lives and that speaks to how important this rivalry is. This game has been played for a very long time and is an important rivalry for the towns.”

Coach Jones said he is most happy for his seniors, “It is great to keep that trophy for the seniors.”

The teams were led by sophomore quarterbacks with Seaford’s Malik Smith and Laurel’s Kaden Shockley leading the way. Seaford punted following its first possession. The Bulldogs’ Kylse Wilson’s third down run for 10 yards set up a four-yard touchdown run for Javier White. The PAT by Mike Gonzalez-Perez gave the Bulldogs the 7-0 lead half-way through the first quarter.

The Laurel defense closed off the middle to running backs Ray Brady and Booker DeShields and after a sack on Smith, the Blue Jays were forced to punt. Shockley’s option play captured a first down but Seaford’s Mario Fisher broke his way through the line for a sack on Shockley that ended the first quarter.

In the second quarter, Laurel opened with two incomplete passes and DeShields carried the punt return for the Blue Jays.  Laurel’s personal foul on a punt return moved the ball 15 yards, but the Bulldogs retook possession of the football with under a minute to play in the first half. Laurel moved the ball to the 24 yard-line and with four seconds to go Careen Bolden intercepted Shockley’s pass at the goal line. The Blue Jays took a knee to head into half-time.

Laurel began the second half with a personal foul penalty and converted the 20 yards on four plays for a first down. Wilson, who ran for 127 yards in 15 carries, and Robert Malone collected first down runs while a pitch to Javier White made it first and goal from the three yard-line. Wilson carried the ball to the end zone and Gonzalez-Perez added the PAT for the 14-0 lead.

The game changing moment came on the kick-off when Seaford fumbled the ball and the Bulldogs fell on it at the one yard-line. Wilson added the quick six points plus the extra point to put the score at 21-0. The Laurel Bulldogs had grabbed all momentum and coach Jones said, “Anytime you get a big play like that is important and our kids used that momentum and built on it.”

Laurel committed a third personal foul awarding Seaford 15 yards but Seaford fell short on a pass intended for Aviyan Matthews and turned the ball over on downs. Later in the fourth quarter Laurel nailed the coffin with a touchdown on a 36-yard pass to White and an extra point by Gonzalez-Perez for the 28-0 score.

Coach Jones said the players responded in the second half, “It is great when anytime you can have second half team and they came out after the break and stepped it up. I am really proud of them tonight.”

Laurel will ride north to play Caravel next week while the Blue Jays stop at Lake Forest for a Henlopen South game.